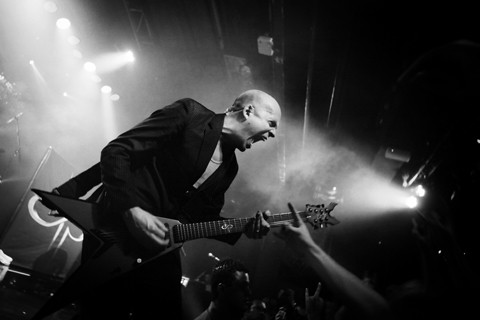 (Andy Synn was on hand when Devin Townsend played ULU in London on November 11, and he provides this report of the show. This was one of four DT shows in London last week, each one devoted to the performance of a single Devin Townsend Project album from start to finish.)

Surprisingly, the venue for tonight’s epic extravaganza (epstravaganza?) was smaller than I would have anticipated, however still a decent size, with a large stage, high ceiling and spacious standing room for the sold-out capacity crowd. With more than a few Ziltoid puppets (mine remained behind to guard my car against interlopers) already waving in the air, it fell to Manchester prog-rock quartet Amplifier to warm up the already very receptive crowd with their brand of Brit-rock Tool-esque musical expressionism. Indeed, the band clearly had a reasonable fan-base of their own in attendance, judging by the impressively loud and clear response they received from those gathered in the front rows.

However, tonight was really about one man, or one band, depending on where one draws the already blurred lines between the two entities. As the crowd finally swelled to its full, massive throng, we were treated to an array of comical images and video stills superimposing Devin’s distorted face onto a series of film posters and movie montages, which kept everyone entertained during the inevitable lull in musical activity as the stage was torn down and set back up again for the night’s headline act. As things began to take shape we were “treated” (inverted commas to imply sarcasm there folks) to the joys of Ziltoid Radio, playing all the most terrifying and chipmunk-esque pop trash that could be mustered to prime the already expectant crowd. 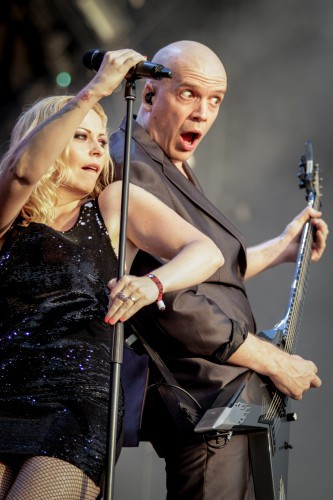 Finally The Devin Townsend Project took the stage, to rapturous applause yet surprisingly little fanfare in their own right. An effusive and visibly moved Devin Townsend took the time to introduce his band for the evening, the largest cheers being reserved for the ever-present Dave Young (Devin’s right-hand man) and the beautiful Anneke Van Giersberg. Treating the event as one giant, informal party, Devin stated simply, “Let’s do this,” as he swung into action, peeling out the opening riff to “Addicted!” with obvious pleasure, grinning ear to ear as he commenced his unabashed musical celebration of life in all its glory and strangeness.

The night simply unfolded from there, getting better and better as things went on. The band were impressively tight throughout, with Anneke’s own contributions actually adding more than on record, her voice cutting through with compelling power and grace. Few people in the world have a voice that can stand up to Devin’s in full flight though, whether or not he was snarling his way through the bouncy aggro-pop of “Universe In A Ball” or soaring operatically in “The Way Home”, which gave his impressive pipes a real work-out and, thanks to a thunderous drumming performance by Ryan Van Poederooyen, rolled over the audience in impressively heavy fashion.

There was also some sheer delight to be had in seeing a room packed full of otherwise respectable metal and prog fans bouncing around and singing along unashamedly to the irrepressible pop-rock of “Bend It Like Bender”, Ms Van Giersberg’s vivacious singing adding the cherry on top of an already sugary sweet moment. Indeed Van Giersberg’s role on the night was, seemingly, much beefed up from that found on record, adding extra layers of backing vocals and taking on a much larger role in the night’s overall success.

On such a night it seems almost churlish to focus on any singular elements or songs over any other, however some particular highlights of the evening were: the stupendously heavy delivery of the mighty “Supercrush!”, its pounding main riff accented by Anneke’s pure tones, Van Poederooyen’s brilliantly nuanced stick-work behind the kit, and Devin’s own effusive declaration of love for the audience. Most pleasingly of all the second verse was delivered by Devin Townsend himself (rather than Anneke, as is done on record) allowing his huge range and emotionally vibrant delivery to swell and fill the room with life and character.

This was followed by an ebullient rendition of “Hyperdrive”, which saw Devin happily stepping aside from the spotlight to act as band-leader for Anneke’s moment of glory, allowing her to really take the song and make it her own, producing a huge and vibrant spectacle filled with a energy and life.

By contrast, the stripped-down acoustic rendition of “Ih-Ah”, featuring only Devin, Young, and Van Giersberg onstage, provided the evening’s quietest and most reflective moment, its quasi-pop, folk-esque styles bringing an enjoyable hippy-ish vibes to proceedings which Devin referred to as his “More Than Words, Extreme moment” (look it up if you don’t get the reference). With only a pair of voices (Townsend and Van Giersberg) and a pair of acoustic guitars (Townsend and Young), the song took on an entirely different form than the familiar version, and was all the better and more compelling for it.

Between songs, Townsend would stop and chat amiably with the crowd, clearly humbled by the ecstatic response and the sheer verve with which his lyrics were chanted back at him. He made sure to thank all those involved in all four shows several times over, from the merch girl to the lighting tech, from the crowd in front of the stage to the stage-hands behind it, clearly aware of what a life-changing experience it was for all involved.

Yet even all good things must end in time; following a wonderfully trippy and spaced-out rendition of “Numbers”, a wistful yet ecstatically happy Devin Townsend hefted his mighty guitar one last time to let rip the catchy-as-hell opening riff to “Awake!”, the band diving headlong into the song with a sense of beautiful finality and acceptance, every member giving their all and really delivering each note and beat with a sense of joyful abandon.

The band’s encore was a much speculated issue, with no-one outside of their inner circle aware in advance of what songs would be plucked from Devin’s varied back-catalogue to send the night off in style. A visibly emotional Devin Townsend quipped that although the band hadn’t actually left the stage we should pretend like they had, to give the night that rock star feel, though he himself clearly wanted nothing more than to simply to stay onstage to breathe it all in. And rightly so. With all the effort that had gone into making each of the four nights such a special occasion, it was only fitting that the man be given time to truly absorb the singular and amazing nature of the experience.

For their finale, the band had three carefully selected songs left to deliver: an extensive and progressive version of “Pixillate” (from Synchestra), a beautiful and flowing version of “Life” (from Ocean Machine), and finally an uplifting and majestic version of “Kingdom” (from Physicist) which particularly pleased a certain someone I was with. In particular, the sentiments and gorgeously melodic delivery of the latter provided the perfect send-off for the night, capping off an evening dedicated to love in all its many forms.

The climactic inclusion of these 3 songs, each subtly altered and delivered in a more mature and expressive manner, showcased how deeply the common threads run through all of Devin’s material, every song an expression of the man’s complex and often vulnerable personality. It was truly a privilege to be there and partake of the night’s festivities and the emotional connection built by the music. It was an experience I will never forget.

Stay tuned for my thoughts on “Ghost – Live at Union Chapel”, which I was also lucky enough to attend!