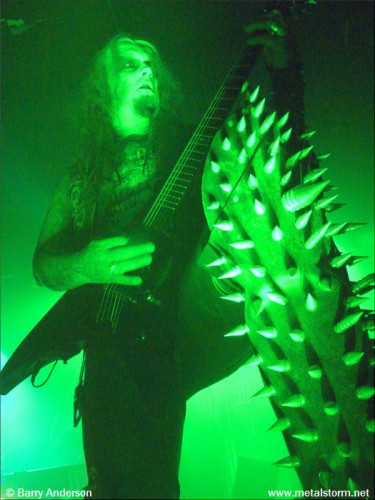 (Stop the presses!  Andy Synn attended Dimmu Borgir’s performance in Nottingham last night and he’s already delivered this concert review, plus two videos he filmed of the show.  Further proof that, like killer whales during their first month of life, Andy does not sleep.)

“An Evening With Dimmu Borgir”, as this occasion was billed, saw the band performing two sets during the course of the evening. The first featured Enthrone Darkness Triumphant performed in its entirety, while the second, subsequent set, saw the group concentrate on its most recent quartet of albums for a more dynamically varied mix of material.

For the first two songs, “Mourning Palace” and “Spellbound (By The Devil)”, the guitars were annoyingly muted, resulting in a mix of heaving bass lines and rumbling drums which, although powerful, lacked much of the clarity and sharpened melody which the songs require to truly breathe their morbid magic.

Thankfully, the sound picked up just near the end of the second song, allowing “In Death’s Embrace” to spread its blackened wings with malevolent grace and majestic glory. With the sound levels thus balanced out and the guitars now slicing through the mix like razor-edged scalpels, the song provided an early high-point to the evening, the 6 members performing as one blasphemously tight unit to produce glorious swathes of blackened riffage and sweeping, evocative keyboard lines. 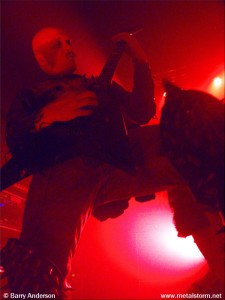 An apocalyptic rendition of “Tormentor Of Christian Souls” also provided one of the night’s early highlights with its tumultuous blasting pace, spiky thrash dynamics and violently shifting structure. The riffs were scorchingly delivered throughout, cutting through the air like knives of molten fire, threatening life and limb with their deadly potency. The crowd responded in kind, roaring their approval with one terrible voice, fists hammering the air in unison with every crackling snare beat and crunching riff.

The mournful funeral procession of “Entrance” brought some light and shade to the proceedings, its stately pace providing some much needed breathing room in the set, segueing smoothly into the blast-happy fury of “Master Of Disharmony” and “Prudence’s Fall”, whose blisteringly abrasive delivery allowed drummer Daray to demonstrate his precision blasting abilities with perfect power and accuracy. These song’s scathing guitars and venomous vocal hooks provided an obvious counterpoint to the initially epic, yet ultimately surprisingly anaemic take on “A Succubus In Rapture”, which followed, producing the night’s first (albeit minor) disappointment.

Thankfully, the first set off the evening was capped off by a monumental “Raabjorn Speiler Draugheimens Skodde”, matching ominous grooves with sharpened needles of icy guitar melodies and ethereal keyboard runs, stabbing and slashing away with unholy vitriol to end the evening’s first encounter in darkly spectacular style.

Kicking off their second set with a thunderous rendition of “Kings Of The Carnival Creation” proved to be a smart move, its furious pace and crushing guitar work immediately differentiating the second set of the evening from the first, more nostalgic, performance.  The ever-hyperactive Galder stalked the stage like the ghoulish guitar hero he has become, all wide eyed stares and suggestive leers, while his more restrained comrade Silenoz chose a more introverted path, planting himself firmly with one foot atop the monitor in order to survey the assembled throng. 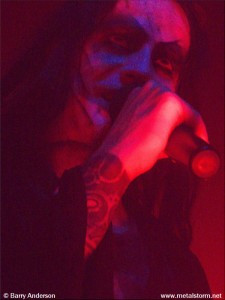 A gloriously epic “Dimmu Borgir” and a stupendously punchy “Ritualist” swiftly followed, with Shagrath taking on both his traditional vocal parts and the still-vacant clean singing role with equal gusto. Indeed, the frontman was clearly in his element before an adoring crowd, equally adept at taunting them towards greater ire as he was in thanking them effusively for their dedication.

As one of my companions remarked to me, “[Dimmu] make standard tuning sound so heavy”, a fact that was attested to by the dense and angular delivery of fan-favourite “Gateways”, which, although suffering slightly due to the (necessary) use of pre-recorded backing vocals, utilised an array of hammering rhythms and blast-furnace drums to defiantly up the ante in terms of speed and intensity, delivering a stunning performance of shock and awe.

The evening saw a pretty even split between Shagrath and Galder as to who provided the most obvious focal point and worked the rock star moves best. The former varied between slithering rock star cool and messianic posturing, while the latter stood proudly and defiantly in his chosen guitar stance swinging his arms and gesticulating with wild abandon as he peeled off tasty morsels of prime riffage and sweet lead lines.

The rhythmic devastation of “Puritania” drew a rabid response from the crowd, prominent keys adding a buzzing, industrial aesthetic to the artillery-scale drumming and utterly crushing guitars, all of which led into the cinematic scope of “The Serpentine Offering”, which once again saw Shagrath acquit himself manfully to the task of handling both clean and harsh vocals.

The night could only end one way however, with a cataclysmic performance of the now classic “Progenies Of The Great Apocalypse” whose dazzling lights and devastating sonic violence brought down the house in a perfectly harnessed maelstrom of gleeful misanthropy, blasting and heaving and clawing its way towards a welcome oblivion.