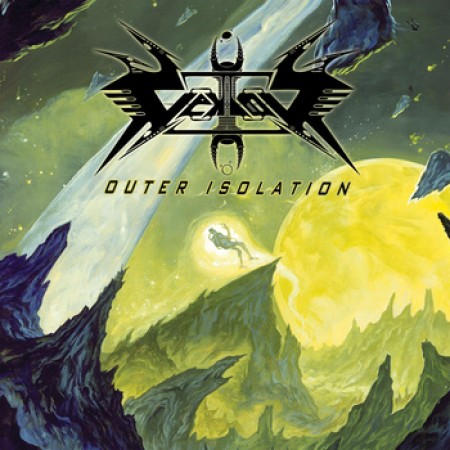 Originality is a loaded word when talking about music of any sort.  Some would argue there is no originality any more, that we have exhausted every worthwhile note combination, every beat, every possible syncopation and harmony imaginable.  If you’ll notice, and correct me if I’m wrong dear NCS readers, I have never used this word once in any of my reviews to describe a band’s sound as a whole.  I feel, however, that when it comes to intergalactic blackened space death jazz thrashers Vektor, “original” is exactly the word that must be applied.

No one else out there sounds like these guys, and they do what they do with unmatched conviction. I don’t know how many of you who read NCS heard this band’s debut album, Black Future, but to deny the UTTER SHEER FUCKING INSANITY of the music on that album would definitely be foolhardy. Vektor kind of fell off of my radar, though, after I listened to Black Future so many times that it created its own black hole and collapsed its own universe into it.  It was only like last fucking month that I found out Vektor would be releasing a new album entitled Outer Isolation.  To say I was pumped would be a huge understatement. To say that this album takes Vektor’s sound to the next level would be an even bigger fucking understatement.

For the uninitiated, Vektor play a crazy, fuck-nuts hybrid of thrash metal, black metal and death metal with jazz coloring.  But they don’t just add small doses and elements of these styles; they fully incorporate and combine them in all of their glory into cohesive, atom-smashing assaults.

In a nutshell, Vektor’s sound is something that by all conceivable logic should be impossible to pull off with such proficiency and legitimacy.  One would expect that their strategy would lead them in a completely directionless meandering, with a train wreck at the end (and that’s the ending I think just about anyone else would reach if they were to attempt what Vektor has done). That Vektor has avoided those pitfalls is part of what makes this album truly stand out.  The number of bands who have genre-blended this seamlessly and successfully I think could be counted on your fingers. 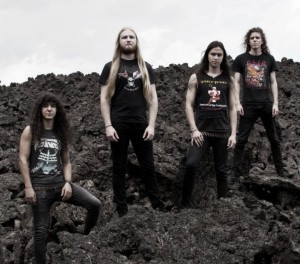 So let’s dig into the music.  There are a lot of riffs.  A lot of fucking riffs.  I’d be hard-pressed to provide even a reasonable estimate of the number, and that’s not including lead breaks and clean parts that are peppered throughout the songs.

There are numerous odd time signatures and tons of transitions.  None of these songs is in a standard format of any sort, and that resistance to accepted form is part of what keeps the music so interesting.  The music also spans a WIDE range of tempos, even within individual songs.  I can see that some listeners, not terribly experienced in prog circles, might become totally confused by all the transitions, especially considering that all three components (new riffs, new time signature, new tempo) are almost always introduced all at once.  A trifecta of awesome, as it were.

The riffs range the entire gamut of thrash, black, and death metal riffing.  EVERYTHING you have ever heard in those genres will probably rear its head in this album.  Album opener “The Cosmic Cortex” alone has an eerie, spacey jazz intro followed by mid-paced death metal riffing, followed by thrash and black metal assaults.  It’s also ten-plus minutes long.  Quite a ballsy move for an opening track, especially by a band playing a hybrid of musical styles in which epic-length numbers are seldom attempted.

This album is also as infectious as a cocktail of every STD ever transmitted.  Try and get songs like “Echoless Chamber” or  “Venus Project” out of your head, and the sonic parasite implanted in your mind will force you to rip out your eyes and shove knives into the sockets before allowing you to forget them.  The clean sections on this album are also something else, really recalling vibes of romanticism and sometimes even video games, in a way.  The intro of “Dark Creations, Dead Creators” reminds me of a fucking Mario game.

The production on Outer Isolation has resulted in one of those instances of a refreshing, totally organic sound.  It’s meaty and human, channeling a vibe that almost feels like you’re hearing something mixed straight off a sounding board from a live show.  This gives the album an intensity you can really quantify, and by quantify I mean you can recognize that it’s made of two ingredients: fucking and awesome.

The performances on this album are something I’m just going to let the music speak for, but this needs to be said: David DiSanto is one of the best vocalists in metal right now.  I have NO CLUE how he does his now-trademark banshee wails without destroying his own soul.

This album is so good it booted other choices off of my working Top 10 of the Year list.  This is one of the must-have albums of the year, for sure.  Like, seriously.  No really, it’s that fucking awesome.  JUST GRAB THIS SHIT! (It was released by Heavy Artillery Records in the U.S. last week and will hit the streets in Europe on Dec. 2.)

One Response to “VEKTOR: “OUTER ISOLATION””