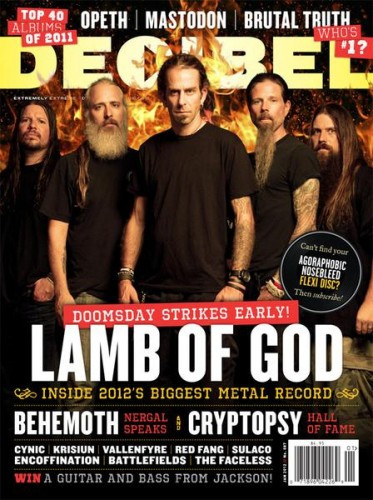 As the end of 2011 approaches, we are about to be deluged with lists of the year’s best metal. We’re going to be doing again what we’ve done the last two years — publishing (1) lists of the year’s best albums by our regular writers, by guest contributors, and by our readers, and (2) our list of 2011’s most infectious extreme metal songs. As usual, we’re going to invite your participation in this frenzy of listmania at our site. Details about how you can do that will be coming later this week.

Listmania has already started at DECIBEL magazine — the only U.S.-based print metal mag still worth reading, in our humble opinion. The January 2012 issue will include their annual list of the Top 40 best extreme metal albums of the year. We haven’t yet received our copy here at NCS, but this morning we learned that DECIBEL has named Path of Totality by Brooklyn-based Tombs as the “Album of the Year”.

We’ve featured music and videos from Path of Totality several times this year, and it’s definitely one of my own favorite releases of 2011. So, congrats to Tombs for this signal recognition by DECIBEL. After the jump, you can stream the whole album, and if you like what you hear, it’s available on the Tombs Bandcamp page (here). Also after the jump, check out a cool video of Tombs performing live on a Hudson River metal cruise on October 22. We featured this video previously, but one good turn deserves another.

6 Responses to “LISTMANIA SEASON IS UPON US: DECIBEL’S ALBUM OF THE YEAR”