(NCS writer BadWolf provides this review of the new album by Cormorant, which is still streaming at NPR, and which BadWolf calls “the album of the year.” )

These times are trying. The throat of winter is upon me here in the Midwest as my country prepares to enter its third year of depression and poverty, its eleventh of war. I drive home from work, NPR has nothing but bad news, and the only metal I can find on the radio during daylight hours is The Devil Wears Prada on the local Christian station. It was just Thanksgiving, what have I got to be thankful for (besides my family, friends, and relatively good health)?

When these Bay Area wunderkinds released their debut, Metazoa, it was an amazing experience lost amidst a bumper-crop of instant-classics. Cheers to the underdog, the completely independent album that fought for our attention against heavyweights like The Way of All Flesh, ObZen, Crack the Skye, Watershed, and Blue Record.

For those who are unaware, Cormorant’s music fuses narrative drama and melodic riffage. They borrow techniques from nearly every metallic subgenre, as well as folk and even classic rock, but don’t adhere to a single school of heaviness. This is the mixed martial arts of extreme music—Amon Amarth riffage into Ved Buens Ende weirdness. Their songs can be long, short, or anywhere in between. Those people put off by Opeth and Enslaved’s new records should find Cormorant to be a more than worthy successor. 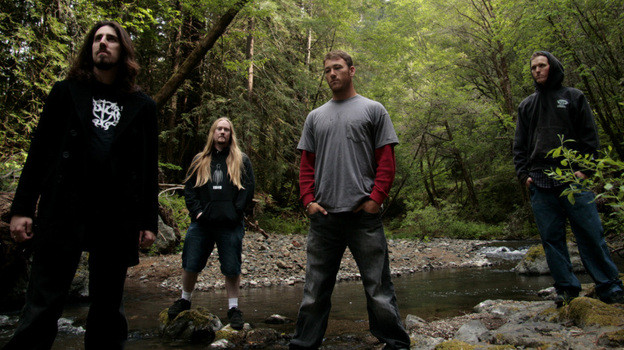 A cursory listen reveals a very different record from its predecessor, Metazoa, a meditation on Animal nature, which felt airy even at its heaviest. Dwellings, which fixates on the struggle of man against structure, has substantially more “fuck you.” The heftiness of the guitar tones has been upped just enough so that Dwellings can bulldoze, but retain melody. Take for example the 10-minute “Junta” [extensively discussed when it premiered on NPR (here)]; during that song, choral voices play counterpoint against gritty metal singing, and then those melodic sections play counterpoint yet again with High on Fire-style sludge riffs, a dramatic machine gun blast pattern a-la Metallica’s “One,” and even an honest-to-god breakdown.

Cormorant, for the first time, sound angry! It would seem that vocalist/bassist/lyricist Arthur Von Nagel has found something to hate in humanity (“The Purest Land”), when all he could find in animalia was sorrow and loss (“Emmigrant’s Wake”). That conviction has made his lyrics all the better—at this point we should prepare to call him metal’s greatest living storyteller—Dio has left us, after all.

Von Nagel writes songs with definite beginnings, middles, and ends. Understanding their stories is integral to getting the full Cormorant experience. For evidence, look no further than “Funambulist,” a song written about Philippe Petit, who walked a tightrope between the two World Trade Center towers in 1974, and the 2008 academy award winning documentary about him, Man On Wire. Like the film, “Funambulist” is structured like a heist film, and the lyrics reflect this alongside the music: The song shifts into a precise thrash segment when Petit would be sneaking into the WTC while the lyrics become a first-hand account of the caper—“Crate/ Five hundred pound weight/ whisked up the freight to sub-level one/ zero four/ The night watchmen snore/ my skull on the floor. Sold to the devil for hero’s deeds.”  Dwellings is full of moments like these—it’s guaranteed to pump your blood.

Further close readings are possible, but to spoil this album’s secret nooks and crannies: “The Purest Land” and its wooden rollercoaster lunge, the hints of Delta Americana on “A Howling Dust,” or closer “Unearthly Dreamings,” which might actually make your body go into freefall as you listen.

This makes two classic albums in a row for Cormorant. One more release like this will make a definite pattern. One more release that exceeds its predecessor and Cormorant will be the best American metal band in a decade. Perhaps they already are. Until that’s proven, we have Dwellings, a rare emerald of an album—an album like Masotodon’s Leviathan, or Opeth’s Blackwater Park.

In fact, I’m going to sing harmony to NPR’s lead melody. This is the album of the year.

Stream it on NPR, then buy it from Cormorant on Bandcamp—the album is completely independent and all proceeds go to the musicians.