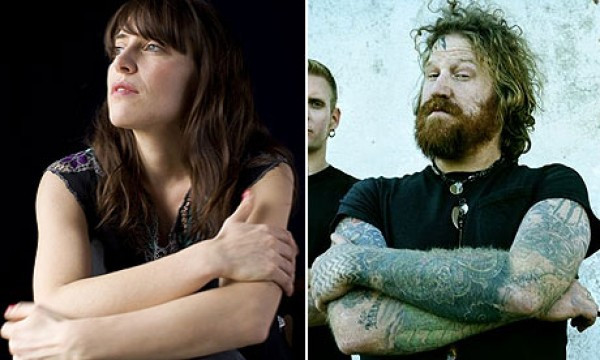 I bet this will sound better than Loutallica.

According to a comment by Mastodon’s Troy Sanders, the band will collaborate with a Canadian singer named Feist on a limited-edition 7-inch single due next year. According to this article from The Guardian, the Canadian singer was introduced to Mastodon on a BBC TV show called Later … with Jools Holland and thought “these two worlds [should] collide”.

“We’re going to do everything we can to work with Feist and have a split 7-inch to support independent record stores,” Sanders told MTV Canada . The next international Record Store Day will take place on April 21, 2012. “The idea is for Mastodon to cover a Feist song and throw some hair and dirt on it. [Then Feist will] take a Mastodon song and pretty it up a little bit.”

According to reports, the two acts got the idea in late October, when Feist performed songs from her album Metals and Mastodon performed some of their songs on that BBC show. Feist told HitFix: “[Mastodon frontman] Brent [Hinds] and I were nodding at each other, and he’s like, ‘Nice riff,’ and I’m like ‘Nice tone,'” she said. “So backstage I’m thinking about letting these two worlds collide, how they should collide, so I’m like, ‘How about Metals meeting metal?’ Brent was like: ‘Well, I do like that “Bad in Each Other” song, I could see that.’ Maybe now I will look into learning to cover “Oblivion” or anything off [The Hunter]. That album’s amazing.”

Hmmm, two worlds colliding. When has that happened recently? Will this be a Loutallica-style train wreck or something that can actually be heard without experiencing a wave of nausea? In an effort to anticipate the answer to that question, I watched the video of Feist performing that song “Bad In Each Other” on Later . . . with Jools Holland.

I can see Mastodon covering this song and having it not suck. It’s already got a swampy feel to it, and it does have a nice riff. I’m less interested in Feist prettying up something like “Oblivion”, but who knows? Maybe it won’t suck either.

Either way, I’m ready to bet money that this collaboration will leave Loutallica in the dirt, though that’s not saying much, I guess. Here’s Feist’s performance, followed by one of the two Mastodon songs performed on the same show. (Thanks to MaxR at Metal Bandcamp and to Andy Synn, both of whom tipped me to this news.)

5 Responses to “MASTODON TO THROW HAIR AND DIRT ON FEIST; FEIST TO PRETTY-UP MASTODON”