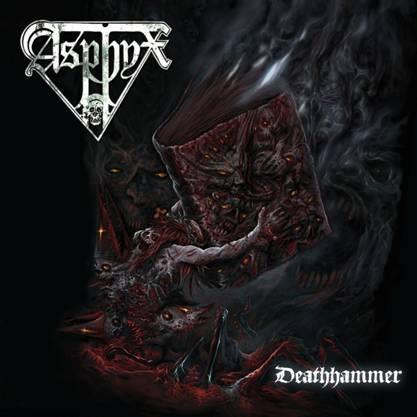 On a day at NCS that began with Vallenfyre, it seemed only fitting to bring our posting day to a close with news about Asphyx.

They’re one of those bands whose name springs to mind immediately when I see or hear the phrase “death/doom”, and they made a strong comeback with Death…The Brutal Way (2009) after a nearly decade-long recording hiatus. They’ve now finished work on their newest studio album, titled Deathhammer, and today Century Media announced that it will be released on February 27, 2012 in Europe and February 28 in North America.

In addition to that welcome news, the band also released an image (above) of the cover art for the album, created by Axel Hermann, who worked on all of the band’s early releases. Brutal.

One more tidbit — the new album was mixed and mastered by the legendary Dan Swanö, who produced Death…The Brutal Way as well as the band’s Live Death Doom release. And speaking of that DVD, I’ve added a clip from the DVD after the jump featuring the title track to the last Asphyx album. Twenty years on, and still wielding the deadly hammer of doom. Gotta love it.

3 Responses to “NEW ASPHYX ON THE HORIZON”