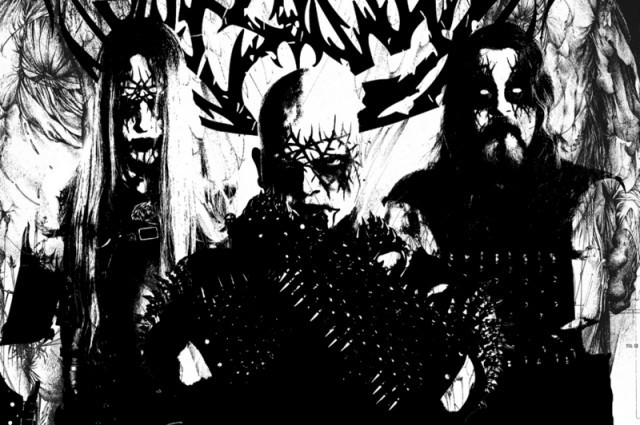 (In this latest edition of THE SYNN REPORT, Andy Synn reviews the discography of Austin, Texas-based black metal band Averse Sefira, with musical accompaniment, of course.)

Recommended for fans of: Belphegor, Secrets Of The Moon, 1349

So here it is, my final Synn Report of 2011. This year’s epitaph belongs to the anti-cosmic chaos legion Averse Sefira.

Agents of corruption and occult warfare, Averse Sefira formed many moons ago in order to create something antithetical to the soulless and vapid musical landscape around them. Casting themselves as fallen angels, rejecting the questionable graces of an unthinking order, they exist as agents of change, sounding the battle hymn of a war against creation. Each album chronicles their bloody and abhorrent rebirth, the womb of abomination spewing forth a black winged angel which spreads its pinions with ominous intent, flexing its claws and baring its teeth in a display of vampiric hunger.

Channelling the forces of elemental chaos through the sacramental nature of their music, they bring forth fire and brimstone through their instruments, twisting and hammering upon tormented strings and tortured skins with savage abandon and merciless precision. Drawing upon the collaborative efforts of their blackened cabal, the band are graced by the presence of “The Lady Of The Evening Faces”, who utilises her arcane knowledge to craft a series of unsettling atmospheric interludes and to layer each track with a haunting, inhuman ambience. 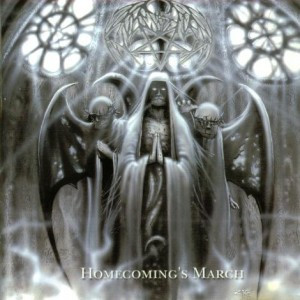 The debut release from the group is, in many ways, quite different from the gargantuan beast they would become. Yet equally it lays down the key foundations of their sound and manifesto, set in stone and written in blood. The songs are longer and more enigmatic than the hymns of destruction and depravity which would follow, less extreme perhaps, but similarly obtuse and ambitious in their structures and direction.

Blending subdued, esoteric melodies with icy winds of harsh guitar, “The Scourge Of Heaven” is a hypnotic and mesmerising arrangement of grandiose riffage and agonised vocals, delivered with a rueful cadence, deploring and desolate. Marching to a martial beat, the song builds in intensity to an almost frenzied conclusion of thrashing metallic fury.

The production is dirty yet surprisingly clear, accenting the untamed savagery of the music with venomous clarity. The trivial nature of life and mortality is exposed through the unforgiving and vicious lyrical delivery, coughing up crimson gobbets of spite and wrath over endless sequences of carving, dissecting guitar work.

The stark melancholia of “For We Have Always Been” begins as a nebulous piece of doom-laden ambience, wallowing in mire and misery, before emerging from its cocoon as a monstrous creature of inchoate rage and pummelling, blackened death metal. By contrast the twisted, towering riffs of “Pax Dei” weave a choking noose of aberrant, distorted strings and forceful aggression, its winding, elaborate tremolo melodies and spasms of blasting sing a berserker hymn of praise to the dark lords of chaos and their black metal worshippers.

Raptor claws and bloody fangs pierce the glooming shadows of “Above The Firmaments Of Wrath” with revenant glee, the nameless beast foaming with rabid fury, thrashing wildly in convulsions of ecstatic delirium while rusted hooks and poisonous barbs of piercing guitar work scour and scourge the penitent flesh.  Supplementing this, “Ad Infinitum” captivates and torments the listener with its unearthly chords and esoteric song structure, spewing forth a noxious miasma of morphine cloud melody and bilious vocal venom.

“Homecoming’s March” delivers its final ultimatum through the medium of apocryphal lyrical texts set to a backing of scorching string-work and propulsive, inhuman drumming. Shot through with moments of soothing clarity and arcane melody, the track defiles and despoils without a thought of regret or remorse.

Sample song: “Above The Firmaments Of Wrath”

[audio:https://www.nocleansinging.com/wp-content/uploads/2011/12/05_-_Above_The_Firmaments_Of_Wrath.mp3|titles=Averse Sefira -Above The Firmaments Of Wrath] 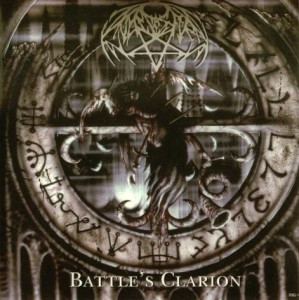 With a profound death metal influence lending its devilish fire to their icy black metal, “Battle’s Clarion” sees the group producing a more powerful, domineering display of occult devastation, claiming the adversarial mantle for their own.

Rising from the abyss in malevolent glory, “Battle’s Clarion” espouses a demonic gospel of transgression and seduction, questioning the established order and proclaiming its supremacy. Furious blast beats herald the coming of the new flesh, as wave after wave of screeching, dive-bombing guitars assault the senses, before finally collapsing into dissonant disarray.

The chilling ambience of “Withering The Storm” leads into the grinding trench warfare of “Deathymn”, a dense and heaving conglomeration of iron-clad riffs and desolate atmospherics, blasting and brutalising with traumatic intensity. The ruptured, crimson flow of fluid complexity leads the listener through a diverse array of sickening sounds, the vocals shrieking and ranting like the gibbering exhortations of the damned, backed by distorted layers of moaning, groaning horror and an evil, crawling bass-line.

The whole record is delivered with startling power and clarity, the organic pulse of drums laying down an apocalyptic barrage of hammering blast beats and complex, convoluted rolls and fills. The guitar tone is thick and weighty (aided and abetted by the 2007 re-mix and re-mastering of the record), as bludgeoning as the most primal death metal riff-hammer, as scything as the sharpest ice-cold blade. Startlingly, the bass plays a prominent role throughout the album, its brooding tones adding depth and nuance to the chaotic constructions on show.

The corrupted beauty of “The Nascent Ones (The Age Of Geburah)” marries dream-like radiance with nightmarish visions of hell-born atrocity, writhing in the throes of blissful passion and bereavement. The beatific, almost reverential quality of the rolling riffs and thunderous drumming structures the song as a symphony of immortal majesty, in tribute to the howling of eternal, frozen winds.

The indignant finale of “Ablaze”, with its clashing blasts, fractured structure, and hypnotic “As above / So below” refrain, melds piercing hooks with abrasive guitar-driven lethality. Despising the hollow desires of the weak and feeble, it ascends in triumphant glory towards apotheosis before imploding into a terrible, lightless singularity of impenetrable darkness. 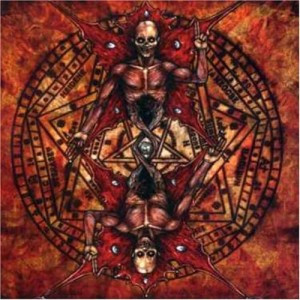 Continuing their clandestine pursuit of pure sonic terrorism, Tetragrammatical Asygtmata sees the group engaging in a mystic ritual of spellbinding guitar-work and controlled chaos to produce a brutally heavy series of enigmatic and unforgiving compositions, layered with a dark and brooding atmosphere of lurking, unfathomable horror.

Summoning forth the infernal fires, born from the depths of the void, the mind-bending technicality of “Hierophant Disgorging” challenges the listener’s expectations of black metal’s long-held orthodoxy, its onslaught of undulating bass-lines and piercing guitar inflicting sacred wounds upon the flesh of the anointed. Howling in stigmatic anguish, the vocals weave a tale of inevitable destruction, an endless cycle of death and rebirth, as the song bleeds out into a dark tide of cryptic, ghostly ambience.

Infectious and purulent, the virulent psychosis of “Plagahabra” is a hegemonic swarm of unrelenting blast-beats and maddening structural twists, feeding upon the weak of mind and body, afflicting them with a leprous mortification of the flesh. Drinking deep of the well of sorrows, the band deliver up a bitter brew of snarling ire and corrosive guitar-work that blisters and bursts in wretched paroxysms of agony.

Trapped within the forbidden circle, “Helix In Audience” conjures up a demonic horde of blitzkrieg drums and gnashing chords to create a frantic and fervent display of the dark arts. An expression of sonorous skill and deviant desires, it conceals an undercurrent of subdued melody beneath its layers of dominant guitars and death-rattle vocals, an unearthly rhapsody bound up in burning chains and cast-iron shackles.

By contrast the black mass procession of “Mana Anima” is a pagan prayer of harsh, grating discordance whose baleful menace slowly builds to unimaginable levels of claustrophobic tension. Its colossal stomp and contentious groove hammers home a story of celestial warfare and elemental revulsion, aggravating harmonics and splashing cymbals splattering the canvas with spectral colours.

The finale of “Sonance Inumberate” sees the band harnessing their titanic fury to break free of the ignorant bonds of dogmatic adherence, confronting the empty promise of salvation with sacrilegious scorn, unleashing chaos and confusion in a final statement of defiance and dissent. Melding dirge-like ambience and hysterical psychosis, it flails and crushes wildly, trapped and constrained yet always on the edge of explosion. 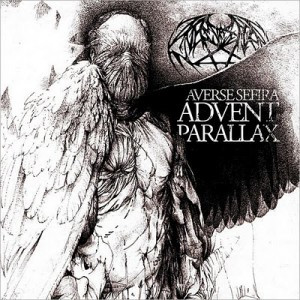 Their most recent effort sees Averse Sefira’s war-like spirit still undimmed by the passage of time, remaining vengeful and defiant in the face of excommunication. This new rebirth of the group sees them reaching transcendent heights of technical ecstasy while plumbing new lows of ghastly, blackened symbolism.

Opener “Descension” twists and turns in a series of unnatural angular contortions, an aberrant concoction of Satanic malice and pulverising power. The gritty and grime-soaked vocals deliver a torrent of bile and blasphemy over a surgical deployment of air-raid drum-strikes and encroaching, glacial guitars, whose towering, monolithic presence is splintered by shards of warped melody.

The frantic riffing and neck-snapping tempo-shifts of “Séance In A Warrior’s Memory” sees the band blasting headlong and hell-bound in pursuit of damnation, before slowing to an oozing, malevolent crawl. Broken-glass riffage and defiling dissonance combine with distorted atmospherics to produce a moment of eerie, unsettling calm in the eye of the storm, before eviscerating winds of divine retribution return to tear through the ranks once more.

The purity and perversion of “Viral Kinesis” is a black mirror distorting the reflected glory of existence into something altogether more terrifying and unnatural. Shards of razor-sharp guitar and fractured fragments of melody pierce the track’s tenebrous gloom as vocalist Sanguine’s banshee howl shatters any hope of salvation, whipping up the tempest tides into a maelstrom of whirling chaos.

The behemoth death march of “Cognition Of Rebirth” revels in its unflinching opposition to the bland expectations of lowly existence, crushing all before it with decadent might, leading into the blistering melody and uncompromising zeal of “Serpent Recoil”. Proclaiming a heretical philosophy of vengeance and violence anathema to the feeble notions of charity and forgiveness, the dire-howl of the vocals is a spiteful call to arms against the illusionists and puppet-masters that perpetuate the fallacies of of our desperate struggle for existence,

Cold and depraved, “Refractions Of An Unexploded Singularity” demonstrates a sickening evolution of form and function, sifting through the ugly detritus of mortality for morsels of sin on which to feed. The scorching dissonance and wailing horror of the track melds the brutal, pulverising fury of guttural death metal with the sand-blasting intensity of black metal’s self-loathing and disgust with the fragile human condition.

Final track “Vomitorium Angelis” builds from an unsettling and upsetting start into a whirling dervish of molten screams and nihilistic havoc, scatter-bombs of technical precision exploding amongst the fire-storm of overwhelming force, climaxing in a thrilling denouement of majestic melody and morbid disharmony, expelling forth visceral waves of terrible beauty and abominable brutality.

EDITOR’S NOTE:  Averse Sefira is selling two of their albums via this Bandcamp link. And here’s an official video for one of the songs from Tetragrammatical Astygmata, filmed live in Quebec during 2005: