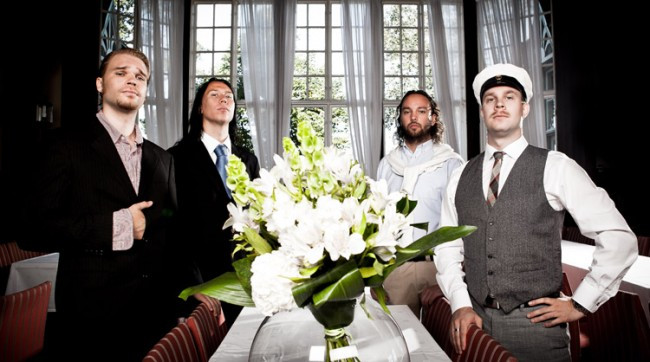 Bob Malmström. That’s a band name. They’re from someplace called Westend in Finland. They claim to have originated borgarcore, which seems to be an abbreviation for bourgeois-hardcore. They are politically incorrect, in that they celebrate the enjoyment of things like eating meat, wearing furs, drinking copious amounts of Dom, lap dances, and making big piles of money.

In October, Spinefarm Records released Bob Malmström’s debut album, Tala svenska eller dö, which means “Speak Swedish or Die”. This has something to do with a linguistic minority group in Finland consisting of Swedish-speaking Finns. According to The Font of All Human Knowledge, “they maintain a strong identity and are alternatively seen either as a distinct subgroup of the Finnish people or as a separate ethnic group or even as a distinct nationality,” and they represent about 5.5% of the total Finnish population.

There seems to be some kind of continuing controversy over various government protections of the right of Swedish-speaking Finns to speak Swedish. Problem is, I can’t quite tell which side of this debate Bob Malmström is on. I found this Bob Malmström interview in Finnish, but as we all know, Google Translate does an especially piss-poor job converting Finnish into English, and the translation I get is mostly gibberish. So, I can’t tell whether Bob Malmström is protesting prejudice against the finlandssvenskar/suomenruotsalaiset or fomenting it — or just putting everyone on. Any Finns out there care to help me out?

Anyway, although this is all kind of an interesting aspect of Finnish culture that I didn’t know existed, it’s not the reason for this post. The reason for this post is the recently released official music video for a Bob Malmström song called “Eliten”, which has been rocking my ass this morning. It’s kind of a searing, headbanging, thrash/hardcore/punk onslaught, as rendered by a bunch of dudes in suits sipping champagne. Fuckin good pancake. Check it after the jump.

Bob Malmström’s Facebook page is here, and their official site is here.

UPDATE! After posting this piece, we contacted Bob Malmström and received this reply, which clears up a few things:

Nice to hear from you and exciting to see that we’ve breached the shores of USA. We’re pushing forward like hell at this moment, so it’s nice to see that some new doors open here and there. A humble thank you for you and your site!

In your review you asked a couple of questions regarding the swedish speaking finns and which side we’re on. We are a part of that minority and swedish speaking Finns are considered elitist and are a common target for populist politicians nowadays, especially close to elections.

The history in a nutshell: Finland belonged to the Swedish kingdom and many of the aristocrats spoke swedish as the laws and bureaucracy were run under swedish rule. When Russia invaded Finland, the swedish speaking cultural and political elite started to infuse national romantic ideologies into the Finnish mindset and helped to create the national identity of Finland. When we finally broke free from Russia in 1917 there was a will to underline that we are independent Finns. This thought has strengthened as time has gone by and today it is a source of heated debate in politics and in the newspapers. Do we need Swedish as a mandatory language, even though only 6% speak it as their mother tongue?

We’re swedish speaking Finns and this is our take on the heated debate. They think we’re arrogant and we won’t prove them wrong. Tongue in cheek? I’d say no, but we have a thought-provoking angle on things and you can’t take everything we say literarily. This is hardcore punk and it should be thought provoking.

You can also view us as a strike towards the dying innovation and stagnation in punk in general. Everything is done the same way it has been done for 30 years. Punk is middle aged. There’s no rebellion left. This is our middle finger to a fat middle aged rebel who doesn’t know what it is anymore.

P.S. When someone commented on the Mustang being a poor man’s sport car, it’s true for the US, but here they start at almost 90 000 USD. Not a rich man’s car, but it’s in a nice upper class price range for a toy.

P.P.S. As a piece of trivia, the guest appearance at the end of the video is Vreth of Finntroll.

9 Responses to “FUCK. IT’S ALREADY THURSDAY AND WE HAVEN’T POSTED ANY FINNISH METAL. TIME TO FIX THAT EGREGIOUS OVERSIGHT.”