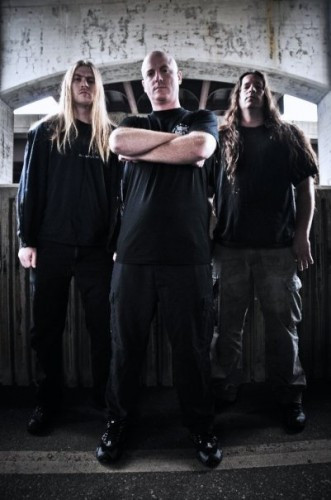 I decided I couldn’t wait until the next monthly NCS round-up of forthcoming albums. This piece of news deserves its very own separate post. Because it’s Dying Fetus. To begin, I think I need to quote yesterday’s press release in full:

“John Gallagher, guitarist and vocalist of DYING FETUS, has announced that the group has entered the studio to record their new full length album. The band will once again be working with longtime producer Steve Wright (Slipknot, Misery Index) at Wrightway Studios in Baltimore, MD.

Set to be released in mid 2012 through Relapse Records, the album will feature nine tracks and is a “return to roots” with production focused slightly more on slam than in the band’s last few works.  Thematically, the album is set to be a good old-fashioned piece of social and political commentary in the style of DYING FETUS as we have come to know.  An official release date and album title will be announced shortly.

“The last album had some groove in it,” stated John, “but [it] was basically a lot of tech; this one is a return to form of older DYING FETUS albums, so to speak- more modern production though, of course.”  “Everything’s tight,” John adds; “…the sound is crushing, the drums are amazing”.

That’s the end of the quote. What do it mean, this return to form, this slightly greater focus on slam? Do they mean this?

[audio:https://www.nocleansinging.com/wp-content/uploads/2011/12/02-One-Shot-One-Kill.mp3|titles=Dying Fetus – One Shot, One Kill]

[audio:https://www.nocleansinging.com/wp-content/uploads/2011/12/01-Praise-the-Lord-Opium-of-the-Masses.mp3|titles=Dying Fetus – Praise the Lord (Opium of the Masses)]

The waiting is the hardest part. There are so many forms to which Dying Fetus might return. All the forms are mangled and obliterated, with the beauty to be found in the twisted shapes of destruction, and all flesh laid waste.

Damn, I sort of lost my mind there for a minute. Sorry about that.

In other news, Dying Fetus have announced a series of special South American shows in mid-January. Here are the dates and places:

They’ve also confirmed appearances at the 2012 Maryland Deathfest and at France’s Hellfest.  The press release says they intend to tour extensively in support of the new album. I assume “extensively” means, “fuck, Seattle is on the ass end of nowhere, do we really have to play there? okay, shit, we’ll do it.”

For continuing updates on Dying Fetus, visit their Facebook and MySpace pages, or just continue to monitor NCS because we’ll be following the progress of this album . . . closely.