Last weekend I departed from our usual focus on metal with a piece on a forthcoming movie (“John Carter”) based on Edgar Rice Burroughs’ classic series of sci-fi books set on Barsoom (the Martian word for Mars). That seemed to generate a fair amount of interest, and although I don’t plan to post about movies or books on any kind of regular basis, I got an e-mail about something else sci-fi-related that has set me off again. So here we go.

The e-mail (from a reader named Ben) pointed me to a web site about something called K3LOID. K3LOID is a sci-fi short film by a Spanish outfit called Big Lazy Robot VFX (“BLR”), based on Eliezer S. Yudkowsky’s Artificial Intelligence Box Experiment (more about that later). Coincidentally, BLR did the visual effects for an amazing short film called “The Gift” that we featured in a THAT’S METAL! post almost a year ago (and if you haven’t seen that, definitely go here and watch it).

All that’s available about K3LOID at the moment is a trailer, which you can see after the jump (and I’m actually not positive that there will ever be anything but this trailer, though I hope a film itself will come to fruition, because both the visuals in the trailer and the concept behind the film are cool).

Based on the trailer, and before I found out about BLR’s involvement, I thought this was a Russian sci-fi film (you’ll see why). That got me thinking about both Russian sci-fi movies and Russian sci-fi novels. I’m certainly no expert in either of those genres, but I remembered really liking a book called Solaris by Stanislaw Lem and the 1972 Russian movie made from that novel (directed by Andrey Tarkovskiy), which captured the sense of solitude, profound mystery, and utter strangeness of the mood and the events captured in the book. If you look, you’ll find Solaris on plenty of internet lists as one of the best sci-fi films ever made.

There was a 2002 American re-make of the Solaris movie directed by Steven Soderbergh starring George Clooney and Natascha McElhone that I either missed or saw and have forgotten. I’m not sure any remake could replace the hypnotic effect of the Russian original, which is about the experiences of a small group of Russian crew on a station established on the surface of a living ocean on a planet called Solaris — an unknowable intelligence that seems to be materializing the painful memories of the crew.

In 1979 Tarkovskiy made another highly regarded Russian sci-fi movie called Stalker. I found this description of the movie on a web site that included it on a list of the Top 15 Cerebral Sci-Fi Films (which also includes Solaris, Akira, Brazil, THX1138, Blade Runner, and The Matrix):

“Andrei Tarkovsky’s brilliant sci-fi mind-bender is a film definitely worth seeking out and one that lends itself to an Inception-esque mind journey. The plot centers on an enigmatic ‘Stalker’ who brings two clients to a mysterious site known as ‘The Zone’ which purportedly allows its visitors a physical experience of their innermost thoughts and desires. While the intentional ambiguity to the nature of zone is meant to challenge the viewer, Tarkovsky’s hypnotic style is in full force wrapping your mind in a dream of a film.”

I also found Stalker ranked No. 1 on io9’s list of the Ten Best Foreign-Language Science Fiction Movies. I’ve only seen one of the movies on that last, but it’s a head-trip — Alphaville, made by French director Jean-Luc Godard. 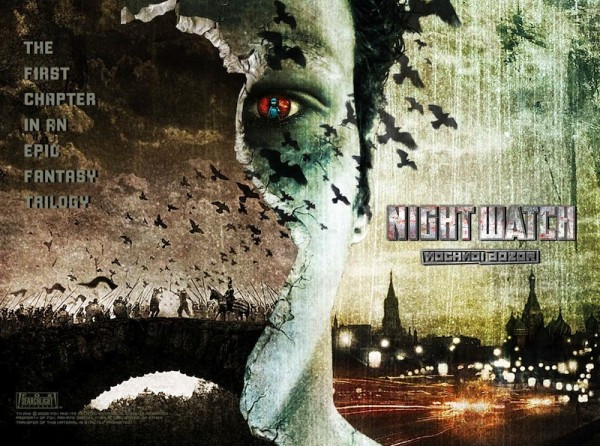 More recently, Russian sci-fi (or more accurately Russian fantasy) has made an international splash with Night Watch and Day Watch. Both are directed by Timur Bekmambetov. Night Watch came out in 2004, the sequel Day Watch followed in 2006, and there are supposedly plans for a third film called Twilight Watch. I haven’t yet seen either of the movies, but one of the people who started NCS with me (IntoTheDarkness) has raved about them to me. One of these days, I need to see them.

About all I know is that the movies involve conflict between supernatural beings of light and darkness, and the creatures of the dark seem to be vampires. If you’ve seen either of these movies, what do you think of them?

The movies are based on a four-part series of fantasy novels written by Sergei Vasilievich Lukyanenko — Day Watch, Night Watch, Twilight Watch, and Last Watch. The movies led to English translations of the novels that appear to have sold quite well outside Russia and rocketed Lukyanenko to international recognition. I haven’t read any of them yet. I tend to be skeptical of anything involving vampires.

Well, back to K3LOID. That film project is based on a thought experiment constructed by a guy named Eliezer S. Yudkowsky, who writes a lot about Artificial Intelligence. The premise for the experiment is the idea that a time will come when human beings will create machines that will achieve intelligence — an ability to re-write their own software codes, an ability to improve and think for themselves, and perhaps eventually a realization that human beings are no longer necessary.

That idea has been the premise of lots of sci-fi for, I dunno, a century? Yudkowsky’s experiment involves a way of dealing with the supposed threat of AI to human existence: create the AI in a sealed “box”, from which the AI could escape by only one means: convincing a human guardian to let it out. Here’s the basic nutshell of the experiment, though it has evolved:

If you’re interested in this, you can learn more at this location.

Here’s the trailer that started this long, meandering post. Obviously, comments on any or all of this shit would be welcome.

Keloid Trailer – A Short Film by BLR from BLR_VFX on Vimeo.

13 Responses to “K3LOID (AND OTHER MEANDERINGS)”