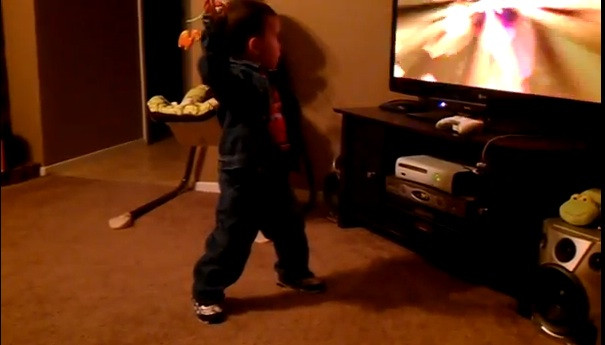 Nature or nurture?  Present from birth or learned behavior?  When it comes to the impulse to move to a groove, it’s pretty clear that human beings are hard-wired to do it.  The following video is further evidence of that.

But the following video is evidence of other things, too:  that if exposed to metal at an early age, before their psyches are corrupted by pop music, children will get it immediately; that in addition to the impulse to move to a groove, the impulse to headbang is also hard-wired; and that Vildhjarta’s master plan to take over the world within the space of a single generation is proceeding successfully.

We’ve all seen other examples of this kind of “metal kids” video before, but this is the best one I’ve seen, because this young dude has definitely got some moves . . . and because of the headbang thing.

According to the description below the video clip, the guy who made it had some friends over to his place and decided to play some of his tunes for one of their kids. Watch what happens.

“There is hope for the future of our﻿ youth.”

“Too﻿ bad that when they grow up they get fed radio shit and start despising this kind of music.”

“or they grow up and learn﻿ to appreciate all music…..”

“This kid will get pussy.”

P.S. The song is “Shadow” from the Måsstaden album. You get one guess about which of our writers sent me the link to this clip.

P.P.S. I’m so fuckin proud of myself for not using That Word even one time in this post.