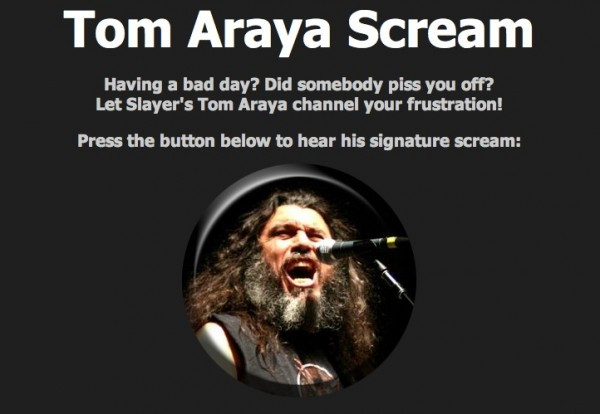 So, this new Metal Injection-conceived web page called Tom Araya Scream has been making the rounds of the interhole since it appeared yesterday. It’s a clever idea, and if Slayer is, like, still your favoritest metal band ever, dude, SLAAAAAAAYER!!!! (while throwing two-handed horns), then you’ll probably be punching this button on your smartphone all weekend to get a few seconds of Tom Araya’s tinny scream.

However, if you’re to the point in your metal-listening life (as I am) when this scream has begun to sound sort of . . . what’s the word? . . . anemic? . . .  by comparison to the kind of really ugly, vicious, bile-vomiting screams and roars you really enjoy, then Tom Araya Scream is more useful as a template for something . . . better.  And no, I’m not talking about Bruce Dickinson or Rob Halford.

Like, how about Lord Worm Scream . . . such as the vein-exploder that starts at about the 3:45 mark of Cryptopsy’s classic “Open Face Surgery”?  (after the jump)

Or maybe John Tardy Scream, of which there are some fine examples in Obituary’s “Don’t Care”:

Or maybe Glen Benton Scream. He’s got a particularly nice one before the solo in Deicide’s “Homage For Satan”. Or how about Corpsegrinder Scream? There are some choice examples from George Fisher in this lovely Cannibal Corpse tune: