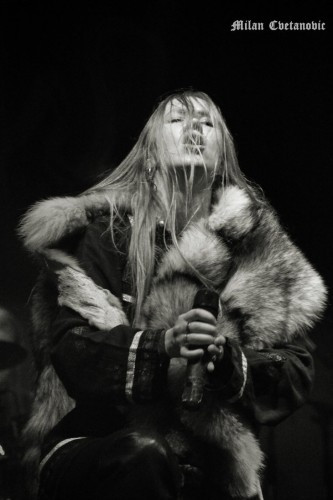 (Our man Trollfiend was good to his word. Even though he has his own new, already thriving, metal blog now (ALSO, WOLVES), he hasn’t forgotten his old friends at NCS. Herewith, his list of . . . uh . . . trollcock tantalizers for 2011.)

Not much new music makes its way to the Trollcave,  I barely get any kind of internet connection up in this bitch, and the iTunes store apparently does not accept Trollcash (which consists individually of a severed and shrunken priest’s head stuffed inside a boiled and distended bull’s scrotum and tied shut with seven strands of golden hair from a female dwarf’s beard – in other words, accepted everywhere you see a Visa or Mastercard logo).  What little new music I get must be carefully pillaged from local and ecologically sustainable villagers.  It must then be fermented inside a sheep carcass for six months and then distilled and filtered through rendered baby fat before the pure delicious goodness rises to the top and the rest trickles out the bottom, fit only to fertilize my dung heap farm.

Since most of the good shit has already been skimmed off the top (sweet delicious chunks like Vallenfyre, for example), I decided to be more selective in my selection of selections for this list.  Specifically, I chose my top 10 folk/folkish/ethnic/Viking/pagan/weird-ass-shit albums of the year…in other words, the gristly nuggets no one else would touch.  So fill up your pints and break out the hot sauce because here we randomly go:

Arkona – Slovo: pagan Russian Rod-worshipers (look it up if you don’t believe me) Arkona punch you in the face with a bear on this latest release.  I really can’t think of a better analogy, so I’m flogging this one until it’s nothing more than a red paste in the snow.  This would be my album of the year, if I cared to have one.  I’m not going to say much more about it since I already reviewed the album a while ago, but I will say go give it a listen or I will punch you in the face with a bear.

Svartsot – Maledictus Eris: Folk death.  Yep.  Thanks to at least one knowledgeable NCS reader I now know that “svart” is Swedish for “black”.  “Sot”, as far as I know, means “drunkard”, but probably not in Swedish.  However, I know Svartsot’s drinking horns aren’t purely for show, and this band brings the heavy along with the folk like any good pack of ale-soused heathen warriors, so I’m going to go with my translation of “Black Drunks”.  Feel free to correct me on that one while I guzzle beer and roll in some soot.

TrollfesT – En Kvest For Den Hellige Gral: If you’ve ever seen TrollfesT you’ll know that they are one of the hardest drinking acts that take occasional music breaks.  The only way I can describe them is “black/party metal with banjos”.  The most fun you’ll ever have getting your face peeled off and soaked in Jagermeister.  On a side note I still have no fucking idea what the title of the album means.  It’s like, “Quest for the Holy…” something something.

Moonsorrow – Varjoina Kuljemme Kuolleiden Maassa: So far, Moonsorrow can do no wrong.  All I can say is that I would have loved to see their tour in China.  The idea of a Finnish folk/black metal band in a sea of screaming Asians just appeals to me in a weird sort of anthropological way.  Also, I’m trying really hard not to chant “Moonsollow! Moonsollow!” because that would be incredibly racist and wrong.  You’ll just have to pretend I did.

Troll Gnet El – Holpnir: What the fuck is Troll Gnet El? Are they folk metal? Beer metal? Folk rock? A bunch of drunken weirdos singing about trolls and beer? If you answered “yes” to all of these questions, you are correct! I’m guessing by now I don’t have to explain why I love this album or why it’s in my top 10 list.  If I do, you haven’t been paying attention, but if you’re not getting it…let me explain.  No, it will take too long. Let me sum up: TROLLS. BEER.

Svartby – Elemental Tales: Another folk death album I’ve already reviewed, but that had to go in my list because it’s a concept album about imps and I’m a huge nerd.  Also it contains the song “Flaming Balls”, which is one of my favourite songs ever and not just because of the title.  Okay, a little bit because of the title.  But it’s a damn fun song, and if you don’t like it you can suck flaming balls while I punch you in the face with a bear.

Finntroll – Nifelvind (Tour Edition): Technically released in 2011, this re-release of an album released in 2010 was released to much critical release.  Some people were pissed at having to pay full album price for an album they’d already paid full album price for, just to get some previously unreleased releases they hadn’t got on the album they’d got when it was originally released.  But ZOMG NEW COVER ART! Personally, I thought it was worth it for the Pet Shop Boys cover, if only because it was a cover of a Pet Shop Boys song and not because I liked it or anything.

Kartikeya – Mahayuga: I dunno if this band counts as folk metal; they describe themselves as “ethnic DM”, which seems a little odd to me as they are Russians singing about Hinduism.  But that’s all semantic sophistry – Kartikeya is fucking awesome death metal that incorporates traditional Indian melodies and rhythms into the sound of Shiva kicking ass all over the Subcontinent with his eighteen legs and punching some mere twelve-faced punk in his twelve faces with whatever animal that is kind of like a bear lives in India.

Tyr – The Lay of Thrym: Folk metal’s answer to that proggy djentcore band you’re embarrassed to admit that you like, Tyr can be challenging at times.  I know here at NCS there’s a hardline stance against bands that feature clean vocals, but I’m hoping the fact that no one will actually be reading this list will allow me to sneak this one in.  Tyr can be proggy at times, sometimes they even sound a little power-metally, and sometimes they abandon metal altogether for some folky chant-a-longs.  But they make damn fine music, and they make it the Viking way…not like those nerds in Amon Amarth.

That’s it for this year.  Hold your heathen hammers high, my metal brothers and sisters, and enjoy your holidays.  I’ll be sending gifts of Trollcash to all of you.