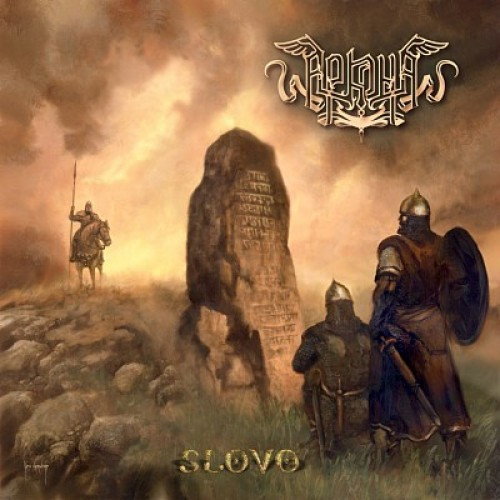 (We are so pleased to feature the first NCS guest review (and we hope it’s not the last) by one of our readers and frequent commenters, the only guy around here who gives Phro a run for his money, Trollfiend.)

I sometimes find myself compelled to defend my love of folk and pagan metal to the people I talk about music with, regardless of whether or not they might also like it or, if I’m being honest, whether or not they care.  This is because the genre has a bit of a reputation, possibly deserved, of being a little cheesy.  You know what I mean: furs, swords, war paint . . . this is what a lot of people think of when they hear “folk metal”.  For those of us who love it, though, that image is as fundamental as corpse paint is to old school Norwegian black metal.

Unfortunately along with this expected trope often comes a certain level of dismissal: You see a bunch of dirty assholes in fur cloaks and you automatically think, ‘Oh great, another pile of wannabe Vikings.  I bet that guy drives a Prius.’  If you take that approach to Russian folk metal powerhouse Arkona, however, you’re missing out on having your ass kicked all over Siberia in all kinds of heretofore undiscovered and not entirely unpleasant ways.

Like a lot of female-fronted bands, especially in metal, Arkona pretty much revolves around its frontwoman. In this case, however. It’s not because the record label thinks tits and leather pants are going to sell more albums…it’s because iron-piped Masha “Scream” Arhipova is a fucking ballbusting Slavic demon goddess with a whip made out of broken vodka bottles and a voice that is like getting punched in the face with a bear.

So when I was offered the chance to review Arkona’s latest album Slovo (released Aug 26, 2011) I sharted myself with glee.  After I changed my pants (no one likes to sit in cold shart) I sat down to have a listen. 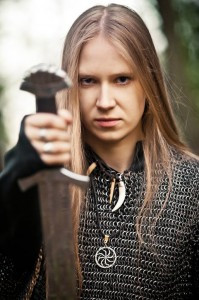 Slovo is a complex album.  Anyone familiar with Arkona’s impressive discography (1 full length demo, 1 EP, 7 studio albums and two concert DVDs) knows to expect that — “uncompromising” pretty much sums up how they approach everything.  It’s also very balanced.  There is a perfect mix of Masha’s gut-wrenching cleans and hellhound growls, and a perfect tradeoff between chunky metal riffage and traditional folk melodies.

Lest I be accused of fellating this album harder than a Thai ladyboy trying to score a meth hit… there is one tiny thing I don’t like about it, and that is the orchestral arrangements.  Personally, I don’t like orchestra in my pagan or folk metal . . . I find it takes me out of the ancient-traditional-history feel I always look for in this kind of music.  That being said, it doesn’t dominate the album (balance, like I told you). so I can overlook it, especially since there’s so much delicious bloody bear meat on this album to eat raw and chase with vodka drunk from a hollowed-out glacier.

(I promised myself I wasn’t going to talk about vodka . . . Russian stereotypes and whatnot . . . but fuck that.  I happen to like vodka).

It’s hard to pick a single track off Slovo and say ‘this is representative of Arkona,’ because they do a lot of different things.  After only a few listens, though, a few stand out to me.  “Leshiy”, which starts off with a polka-like concertina jig and slides into a more traditional metal riff before Masha comes in and eats your face with a throat-raping, death-metal-worthy rasp . . . and then goes back to the polka, interspersed with cackling. I swore I was listening to Trollfest for a minute there. 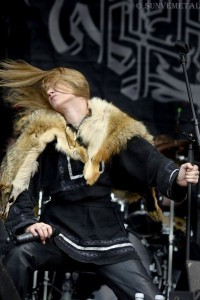 “Nikogda” is almost straight-ahead death metal, until it comes to the clean-sung harmonic bridge, and then jumps into a choral bit with some hiss-rasped undercut vocals.  The title track is a slower, black-metal-esque epic with a hint of folkiness (shut up, it’s a word) with a nice bridge where Masha hits what I can only describe as a melodic shout, and another later, where she is almost narrating.  I don’t understand a goddamn word of Russian, but whatever she is saying, you can tell she means it.

Hot buttery Christ on a pancake, I could wax fangasmic (IT’S A WORD) on every track on this album.  And on every track I could say “first you get this, then you get that, then you get something else.” It sounds like utter chaos, right?  Not that there’s anything wrong with that.  But no, everything works together, for the good of the people . . . .

(I promised I wasn’t going to make any references to Communism here either.  As you can see, I’m not exactly a model of self-restraint).

I was going to say something else about being ass-raped by a dancing bear in a ushanka (look it up), but I think I’ve exhausted my Phrovian analogies for the time being, so I’ll just leave you with this: Slovo is fucking good pancake.  If you already love folk and pagan metal (or as I like to call it, FAP metal), you should add Slovo (and the rest of Arkona’s discog) to your must-have list.  If you don’t, well . . . this album might just make you a convert, comrade.

EDITOR’S NOTE: Slovo is out now in Europe on Napalm Records and will be released in the U.S. in early September; it’s available fo rorder on Napalm’s site here.

For those of you who were snoozing, or worse yet slumming at some other internet site on the day in question, we first mentioned Arkona in this post, which includes one of the tracks from Slovo plus an older video. And because we always like to include music with our reviews, here’s another song — one of Trollfiend’s favorites and one of mine, too (yeah, this shit is growing on me):

Oh hell, why stop there?  Here’s a video of a live Moscow performance of “Leshiy”, with good video and audio quality: