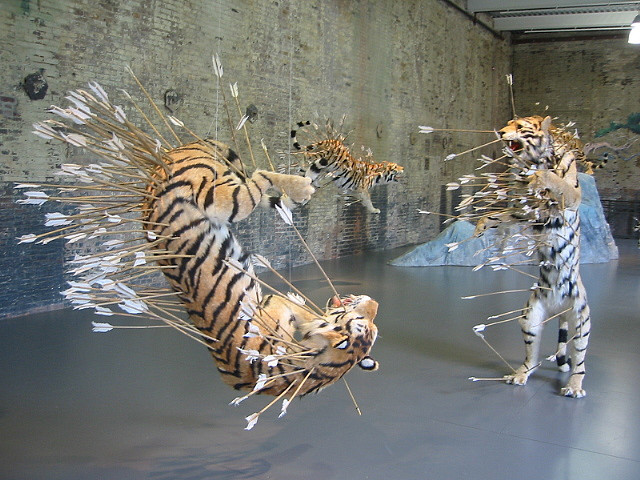 This will be our last THAT’S METAL! post of 2011, unless I decide to do another one, in which case this will be the penultimate one.  It really, probably, will be the last one.  I mainly just wanted to use “penultimate” in a sentence. I don’t see why Andy Synn should be the only person at NCS who uses words like this.

“Penultimate” is a cool-sounding word, although it doesn’t really look or sound anything like what it means. In that respect, it’s like “mantissa”. Mantissa sounds like some kind of giant centipede-like monster with big mouth pincers that it uses to tear and consume human flesh. Instead, it means “an addition of little importance”. “Dragoman” is another example. It sounds like a name or the bass-player in a vicious black metal band, or maybe a Bulgarian MMA star. But it simply means “an interpreter or guide”.

Where was I?  Oh yeah, THAT’S METAL! These are the posts where we collect news items, images, or videos that we think are metal, even though they don’t have anything to do with music. Today, we’ve got four items, and I will act as your dragoman as we work our way through them, providing my own mantissas as we go.

Cai Guo-Qiang is a Chinese artist, though he has lived in New York since 1995. His medium of choice is gunpowder. He started off using gunpowder in drawings, and then moved on to the creation of “explosion events”. If you watched the waaay over-the-top opening ceremonies of the Beijing Olympics, then you’ve seen his work. His most recent explosion event was a daytime spectacular on December 5 called “Black Ceremony” at the Arab Museum of Modern Art in Qatar. It’s been described as the largest daytime fireworks display ever.

So you can imagine already why I thought this was metal. An “explosion event” called “Black Ceremony”? Is there any fuckin doubt?

Now if you think that was metal, watch this next clip. It’s an excerpt from an hour-long PBS special on Cai Guo-Qiang. The first few minutes of the excerpt give a fascinating example of how the artist uses gunpowder to make “drawings”. And hang in there til you see his installation of tigers and arrows and the airplane made from sharp objects confiscated at a Brazilian airport — it’s all about “the aesthetic of pain”. Amazing shit. You can see the whole PBS program here.

(Credits: I found the video of the “Black Ceremony” display on Presurfer, and then started hunting around for more info about Cai Guo-Qiang from there.)

The next item is about sprites and elves. I’m not talking about Dungeons and Dragons or Middle Earth. I’m talking about things that happen 50-90 km above the Earth’s surface, the kind of thing that, once upon a time, would have gotten airline pilots fired if they started talking about what they’d seen.

“Sprites” and “elves” are the names for unusual kinds of lightening discharges that occur high in the atmosphere. They happen extremely quickly, they’re very bright, and they look sort of like fireworks (which is why I thought this would make a nice pairing with Item One). In the language of scientists who study them, “sprites” are the parts of the discharge that resemble jellyfish and travel downwards after starting out as a ball shape. “Elves” are the halos that create eerie visual effects.

The following video was filmed by a research team funded by the Japanese Broadcasting Corporation. They equipped two jets flying over parts of the southwestern U.S. this past summer with cameras, and they presented the results about two weeks ago at the American Geophysical Union Conference. There’s more info about this to be found HERE. The following clip from the film shot by the Japanese researchers is very short.  The one that comes after it is longer. Nature is fucken weird.

(Credit goes to Phro for tipping me to these videos.) 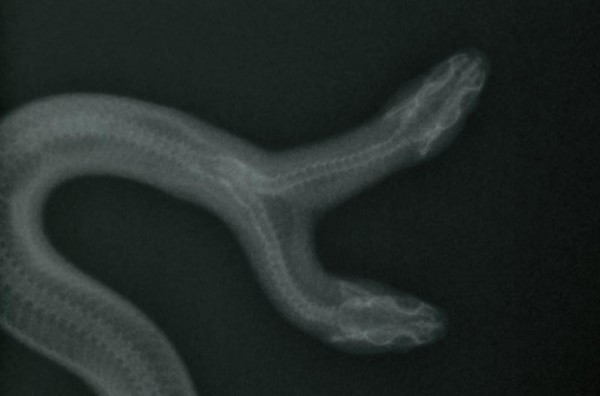 This isn’t artwork. This is more Nature, run amok. This is the x-ray of a two-headed albino Honduran milk snake that was born on Halloween this year (of course) in Central Florida.

It had its first real meal during Thanksgiving week. Unfortunately, that blessed event was captured on film. Yeah, this is metal, but watching this video made me a little sick in my stomach. So, of course I’m sharing it with you.

The voiceover at the end kinda creeped me out. People who love snakes are weird. Except if you love snakes, in which case I wasn’t talking about you, because you’re reading what I write, which makes you a certifiable genius.

I wonder if this is what it’s like when Dino Cazares tucks into a big feed.

(Credit to TYWKIWDBI for this one.)

By the way, do you know what that last item was?  That was the penultimate item in this post.

For the final one, I have some artwork by an artist named Travis Louie. These are some of many paintings he did in a series featuring people and their unusual pets. You can find out more about what gave him the idea, plus see more of his demented creations, at this location. I do think this shit is metal, though I’ll be damned if I can explain why. Also, the penultimate painting below is called “Emily and Her Troll Head”. Just thought I’d mention that.

(Thanks to TYWKIWDBI for this one, too.) 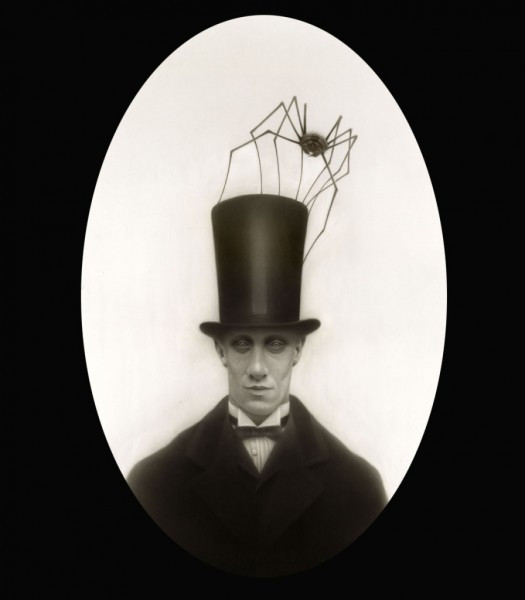 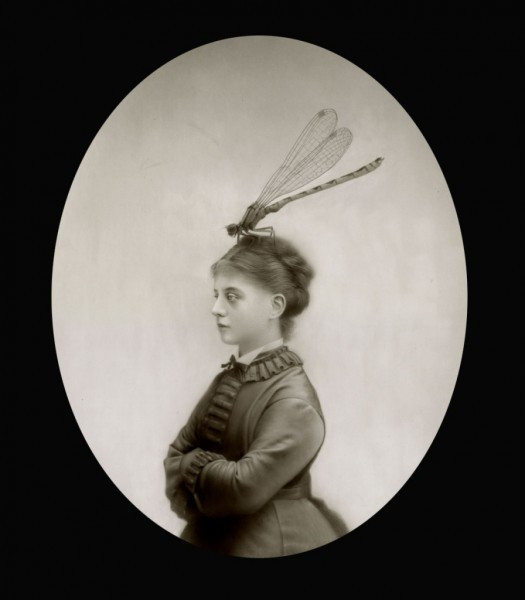 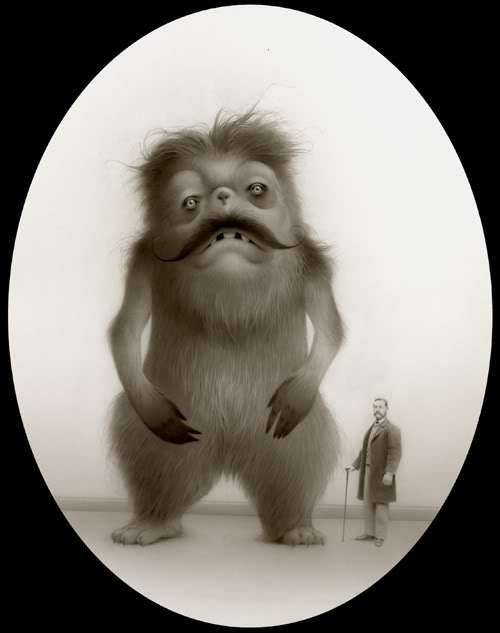 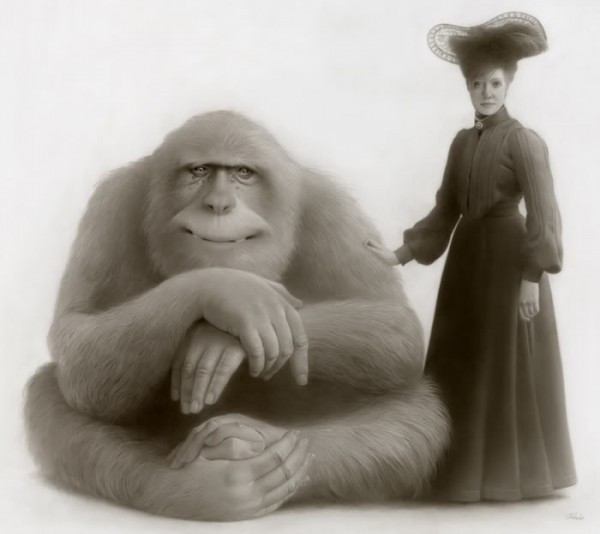 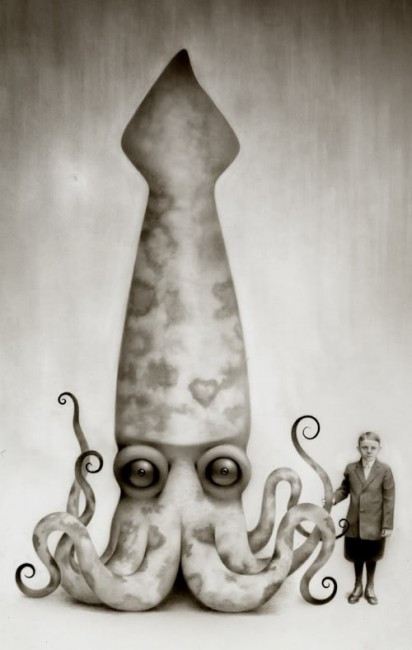 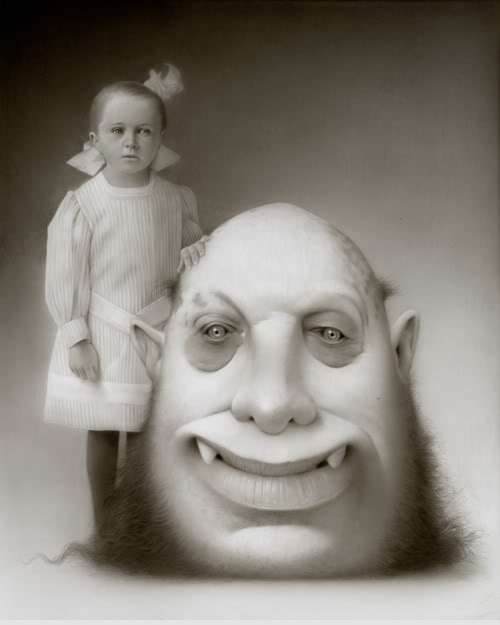 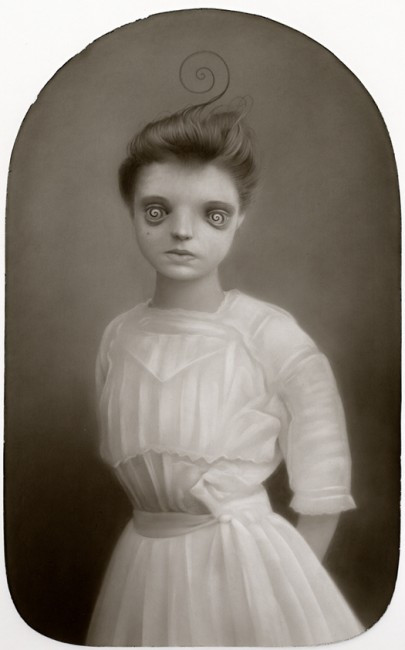