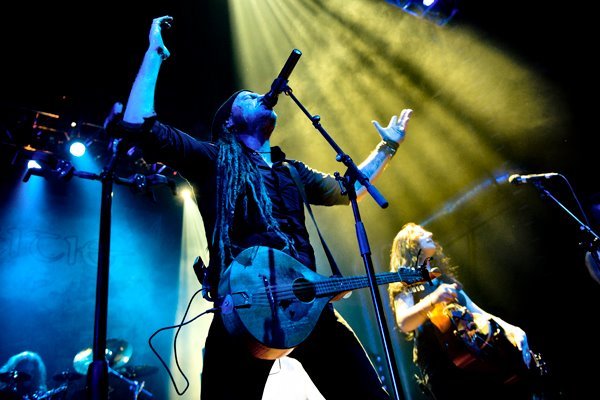 As we reported previously, Switzerland’s Eluveitie have a new album coming on Nuclear Blast in February. Called Helvetios, it’s a concept album about a time long ago when a Celtic tribe called the Helvetii occupied part of Eluveitie’s homeland. Today, the band released the first song from the album for streaming — “Meet the Enemy”.

Unsurprisingly, it includes a variety of folk instruments and a bit of folk melody — but these contributions are brief. The song is mainly a galloping dash of familiar Scandinavian melodic death metal, albeit with a female warrior playing the hurdy-gurdy with the reins clenched in her teeth. The apparently studious Chrigel Glanzmann (who belts out the lyrics on the new song in full-on harsh mode) had this to say about the track on Eluveitie’s blog:

“We’re happy and proud to already present you “Meet The Enemy” – track 7 off our upcoming album “Helvetios”!

It tells you about the ‘encounter’ the Helvetians had with the roman legions in the year 58 BC – one of the crucial points in their history, for it was basically when the gaulish wars erupted.

So the song is pretty much filled with wrath and rage – upholding the furious spirit you might know from tracks such as “Kingdom Come Undone”, “Bloodstained Ground” or “Lament”.
Furthermore the song’s substantial instrumentation (including fiddle, hurdy gurdy, whistles and uilleann pipes) is also enriched by one of the guest musicians, we had the honour to work with – Fredy Schnyder (from Nucleus Torn) who contributed some amazing parts on the hammered dulcimer.

I didn’t enjoy this as much as the Naglfar track we featured earlier today, but it’s not bad. Kinda gets the blood pumping. Mount your steeds and let’s go:

Nuclear Blast has just made this Eluveitie song available for free download in exchange for your e-mail address — HERE.