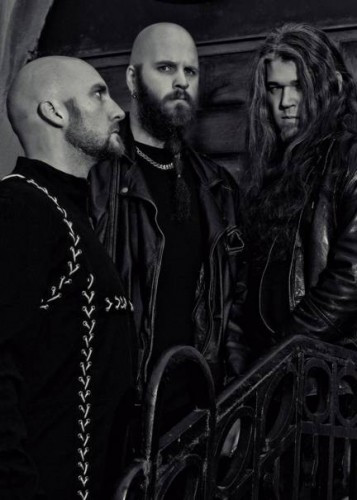 The Friday before Christmas is probably not an ideal day for releasing important news. In fact, as eagle-eyed as I am, I nearly missed this item. I’m so glad I didn’t. When I saw it last night, I became nearly giddy with excitement. Not actually giddy, because giddy is not metal, but nearly giddy. Here are the key elements of this story:

Sweden’s Naglfar has finished recording their new album — the first one since Harvest was released in 2007. It will be called Téras. It will be released by Century Media in March of next year. Sometime between now and then, the band will put out a limited-edition 7″ single that will include one track from Téras and a second song that will be exclusive to the single.

The band’s new line-up is down to vocalist Kristoffer W. Olivius (the band’s original bass player, who become Naglfar’s lead vocalist prior to the recording of Pariah (2005) after the departure of Jens Rydén), guitarist Andreas Nilsson (who has been with the band since its inception), and guitarist Marcus E. Norman (who joined in 2000). The drums for Téras were recorded by Dirk Verbeuren (Soilwork, Scarve).

Last but certainly not least, yesterday Century Media made at song from the new album available for streaming. It’s called “Pale Horse”, and you can listen after the jump. If the quality of Naglfar’s previous albums weren’t enough to put Téras on your radar screen, this song should do it.

With “Pale Horse”, Naglfar deliver yet another infectious example of their distinctive style of black metal — with elements of death metal, powerful grooves, and melodic hooks stewed together in a cauldron of rampaging black metal viciousness — like what I imagine Dissection would be recording if they were still around and hadn’t made a left turn later in their career.

Also, as I learned from a comment by byrd36 about 15 months ago after I ignorantly made fun of Naglfar’s name while riffing on band names in general (here), it is in fact one of the most metal band names in existence. As explained by The Font of All Human Knowledge: “In Norse mythology, Naglfar or Naglfari (Old Norse “nail ship”) is a boat made entirely from the fingernails and toenails of the dead. During the events of Ragnarök, Naglfar is foretold to sail to Vígríðr, ferrying hordes that will there battle with the gods.”

So, check out “Pale Horse”. I think you’ll be glad you did.

UPDATE: Well, fuck, now that Naglfar is dominating my mind, I thought I’d add this pro-shot video of the band performing “A Swarm of Plagues” live at the Party.San Open Air festival in 2006. This is one of the live clips included on the bonus DVD that came with the special edition of Harvest. Also, Naglfar finally established an official facebook page HERE. Naglfar with only 192 likes? That will change . . .