(The dude who has written for NCS as “Willard Shrapnelspear” also wrote briefly as “Rev. Will” for The Number of the Blog before that site shut down following massive technical problems that appear to have deep-sixed the site’s archive of web posts. We agreed to give Rev. Will’s homeless TNOTB posts a home, beginning with this one — which reminded me of this post I wrote for NCS back in the dark ages.)

Warning: Take one glance at these words and find yourself waking up in the hospital from an overdose of (visual) cheese. 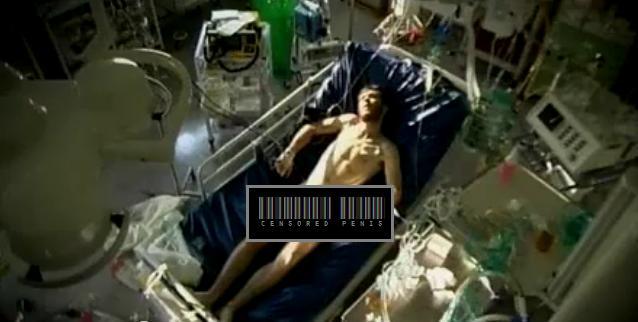 I would have added “old school” into this list if not for the very obvious fact that it is made up of two words. Excluding the really quintessential terms like “riffs”, “solos”, “metal” et cetera, here is a list of words that I thought have become really overused and cheesy over the past few months of metal blog-scouring I did to pre-occupy my stay-home-and-be-a-metal-nerd hours. Some of them are mostly used in a very misleading context, while the rest are pretty normal-looking, everyday words… which is why you guys should already try your best to stop repeating them over and over again, dolts.

If you’re mainly a death or grind reviewer, take a leaf out of the tattered and moth-eaten notebook of old Carcass, and go read some medical dictionaries at night instead of The Vampire Diaries. What? You are a black metal elitist? Go read some mystical shit or military magazines then. If you are an avant-garde kind of person, go read some Lovecraftian stuff or Philip K. Dick. Oh, now you say you are a “new school thrash” person? Er, Ctrl + F and replace all your “Slayer”, “Megadeth”, “Testament”, “Metallica” and “Anthrax” references with “Havok” and “Revocation”. Wait, now you claim you’re a post-something kinda person? Well, immediately after you wake up from your weird dream about flying ponies and unbreakable Piñatas in the morning, jot down whatever words pop into your mind and you’re sweet to go.

Okay, my patience is stretching real thin here. Now you are a –core kid? Go hit up some tattoo parlor employees/bosses and incorporate their vocabulary into your own, familiarize yourself with all the names of bright colors like “pink” or “turquoise”, ask your mum all about hair dyes, consult a straight-edge doctor about all the pierceable parts of the body and how many different ways are there to describe holes of varying sizes, and last but not least, Wikipedia “Anorexia”. You, what? Fridgecore (read: funeral drone doom)?! You actually listen to that?! Simple, go read the instruction booklet on how to operate and maintain your refrigerator well. If you don’t happen to have one, an air-conditioner will suffice too (although I doubt you will have an air-conditioner if you can’t afford a damned refrigerator).

BEHOLD THE 10 UN-TYPABLE WORDS! THOU SHALT NOT INVOKE THE WRATH OF THE CHEESE, UNLESS THOU WISHETH IT TO COME DOWN UPON THEE LIKE A TSUNAMI ON A SANDCASTLE: 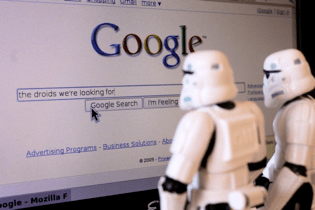 Thank you Lord Google, You Saved Us From The Wrath Of Lord Vader

The newest and youngest addition to this blasphemous list of taboo words, it initially sounded fine since most bloggers and magazines alike preferred to use “visionary” or “having great foresight” instead, but it soon caught on with the crowd and it instantly went from rising star to exiled heretic—the final nail in the coffin was probably a certain extreme metal magazine’s recent, blatantly arse-kissing review of Brutal Truth’s latest “masterpiece”. 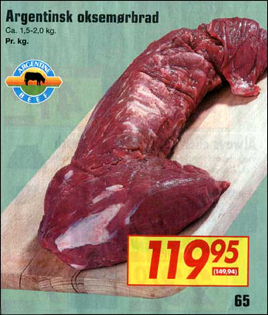 This Isn’t What You Think It is, Sicko

Firstly, a bull’s penis looks nothing like that. That’s just a suggestive and somewhat creative advertisement, whose creator probably “molded” normal, raw beef into that phallus-like shape, just like how you used to play with plasticine when you were a kid (Wait… you guys didn’t mold plasticine into the shape of a phallus?!). Anyhow, this is probably the most commonly misused word at the moment. According to all current English dictionaries, “slab” is used to refer to a big, flat piece of solid material (such as concrete, metal, wood, ice etc.) in the shape of either a rectangle or square. Sound travels through air via molecular vibration, so it is a form of energy being transmitted from one source to another receiving party. It is not physical matter. So why the hell is there people saying things like “serving up a delicious slab of old school death metal”? By the moustache of Einstein, people, please read your high school physics textbooks again. Creativity in a commodity as common as an album review is vital, but still, there has to be some sense of logic to your writing. A good replacement for this word could be the also overused, but not as facepalm-worthy “dose”. 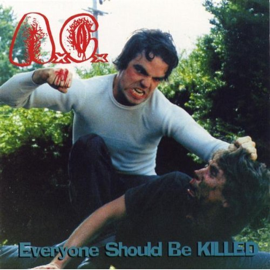 Feel your breakfast/lunch/tea break/dinner/supper lurching up your gullet yet? It seriously gets worse and worse as we go down, doesn’t it? You should also have realized by now that the somewhat random pictures don’t exactly illustrate the context in which these words are actually used in extreme metal album reviews. Hm, “bombardment” sounds like a neat replacement, although it will probably get on this list some time soon too if everyone starts hurling it around the metal blogosphere wantonly. 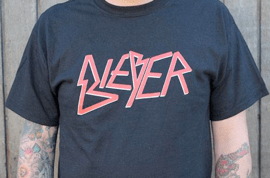 A Slayer Shirt! Wait A Minute…

The alternative form of our 7th place holder is “brewtal”, which should be AVOIDED at all costs. This is primarily because of its potent ability to totally ruin that “brutal” image you are trying to conjure in the reader’s mind (and replaces it with the image of a steaming cup of black coffee), and secondarily because it is used by metalheads and –core fans to actually refer to an awesome drink, and not music for Khrist’s sake.

Sorry For All The Spikes I Ever Made You Land On

“Aural” is often used interchangeably with this word, but if I put it up there right next to “Sonic”, I wouldn’t have the excuse to insert a picture of the adorable blue hedgehog now, would I? This is a tricky one, because it does seem like a reviewer just can’t do without this word, just like how not using “riff” is near impossible in any kind of metal review. But after thinking about it, can’t we just simply use metaphors and analogies instead? Of course, if you happen to be reviewing a run-of-the-mill record, you may be excused for using this horribly common word since I probably will do so myself. It is very easy to heap loads of praise on or tear apart a particularly good or bad record, but incredibly difficult to get your creative juices flowing when faced with a lackluster disc after all. 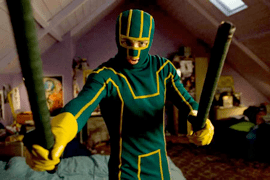 Shut Up. Kick… Yeah, Y’all Know How To Continue This

Yes, yes. Metal is “brutal” and “heavy” and whatnot, every metalhead knows that. It is no surprise then that “kick-ass” naturally becomes part of the vocabulary of many an uncreative reviewer. This word makes extreme metal sound like it is some kind of superhero. 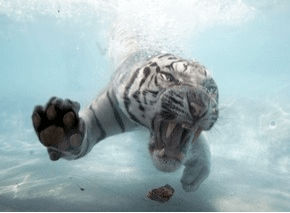 Ahaha. I can only force myself to laugh coldly and sarcastically at this word. Typically found in descriptions like “unleash the beast within” or “<Insert band name> has unleashed a monster upon the world”, this word is better left on the backburner for now so that it can stay out of the shamelight, and perhaps see the light of day again some day. Some day. Pffft, the imagery of releasing some psychopathic monstrosity on our planet Earth is such an overdone thing. Godzilla and King Kong have been there and done that, and surely the reviews of our beloved form of rebellious, us-against-the-world music should shy away from convention too? 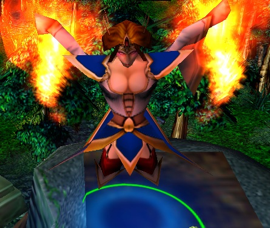 Holy. Khrist-krvshin’. Krap. Every extreme metalhead’s favorite of the Big Four is the most popular reference and comparison made in, say, probably 99% of all extreme metal album reviews out there. Yes, I love Kerry King’s iconic beard very much too. My pet parrot lives in there, so of course I won’t try to snip it off or anything. Anyway, this bunch of ferocious thrashers are hands down the most revered metal granddaddies who popularized the anti-Christ theme and influenced many later thrash and extreme metal albums, I will give you that. But apart from pissing off young and ambitious bands with endless comparisons to them (you’re basically telling them they aren’t being original), you will bore the shit out of your readers. Nobody wants to read about how so and so band sounds like Slayer circa 1981 anymore, or at least I think so. 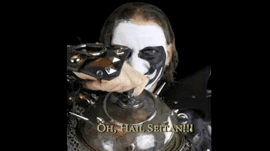 ‘Nuff said. This first runner-up had its ill-fated roots planted since Black Sabbath first burst onto the music scene and shocked the holy goodness out of mainstream society with their openly dark and occultic lyrical themes and imagery. To experience some cheap entertainment, replace all traces of “Satan” with “Jesus” in black metal album reviews, and get ready to laugh yourself silly. I snicker at the thought of “… an album so nefarious and filthy that it is almost as if Jesus himself had a hand in producing this.” 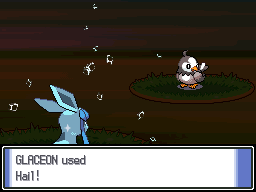 This Wild Starly Has A Death Wish

The ultimate conqueror of conquerors. The master of the master of the Universe. The dimension-ripper of all flakkin’ dimensions up to the googolplex-th one. The Mewtwo of overused words in extreme metal album reviews. Metal ladies and rowdymen, I present to you: “Hailing”. We’ve all seen it at some point in time, be it searching online for a random review of a particular album to read, in a print magazine, in press releases, shameless advertising stickers on the new album you just bought, or during a particularly bad winter day. Okay, I was just joking about the bad winter day. This is a MUST-NOT. It is death by inverted crucifixion (or dehydration from excessive puking) should you be found guilty of using this word. Your readers deserve better treatment, dude. What wrong have they ever done to you? In case any of you don’t have any idea what I’m blabbering about, a typical example of this word’s usage goes something along the lines of “Hailing from <Insert country/state>, <Insert band name> was conceived in <Insert year> and have been wrecking numerous stages since…”

There you have it. Now that you have finished reading the list, let’s try something fun, shall we? Let’s make a long sentence out of these ten taboo words:

Hailing from Florida, SATAN IS A COSMONAUT have unleashed a tasty slab of brutal, forward-thinking, and kick-ass death/thrash metal in the veins of Slayer’s 1986 sonic assault, “Reign In Blood”.

Bring on the cheese, and peace, brothers.