The new year has started off with a bang here at the NCS island. We’ve been swamped with new music in just the last couple of days — too much for me to take in all at once, but I thought I’d pick out a random sampling to throw at your faces on this first Monday of 2012. Both of these songs come from relatively new bands, and both are damned impressive. So, while we’re still not finished with our Listmania look-backs at 2011, let’s also start looking at what the new year has in store for us.

This is a band with members scattered around Portsmouth and Hampshire in the UK. They’ve completed a self-titled debut album scheduled for release on January 26 that contains 11 tracks and more than 50 minutes of music — and as you can see, it features some typically terrific Par Olofsson artwork on the album cover. The band have just made available a single from the album for free download as a taste of what the album offers. It’s called “Godless”, and man, it lit me up like fireworks exploding on New Year’s Eve.

The song is a double-barreled blast of melodic death/thrash with flashy riffing and a headstrong rhythm that’s immediately galvanizing. But what really got me enthusiastic was the instrumental extravagance that takes over in the last third of the song — one head-spinning guitar solo after another. It comes your way right after the jump.

To download this single for yourselves, either visit the band’s Facebook page here or their SoundCloud player at this location. 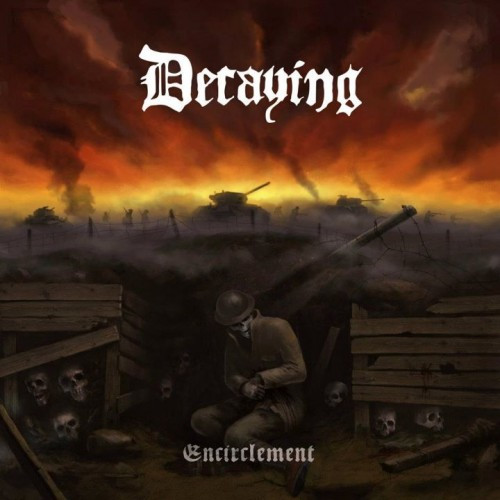 I reviewed the enormously impressive May 2011 debut album — Devastate — of this Finnish death-doom band barely four months ago, and lo and behold they’re releasing a new one today. The first album collected previous demos, but the new one, Encirclement, displays the band’s latest work. We’ve had the album in our clutches since early December, but all the year-end specials we’ve been running have really taken a bite out of my listening time for new music.

I got a reminder of why this band is worth attention when Decaying recently released an official music video for a song from the album called “Operation Citadel”. The song tells about the Battle 0f Kursk in 1943 – the last offensive that Germany was able to launch against Soviet forces in World War II. The battle (a failure for the Germans) is known as the largest tank engagement in history.

Musically, the song brings to mind Asphyx as well as Hail of Bullets, in part because Matias Nastolin sounds like a dead ringer for Martin van Drunen. It’s a heavy rolling tank of a song, but with a memorable melody to accompany the crushing riffs. Check it out:

And Decaying’s Facebook page, which includes info about album ordering, can be accessed via this link. For a limited time, the new album is streaming in full at this location.

5 Responses to “SOME NEW THINGS FOR THE NEW YEAR”