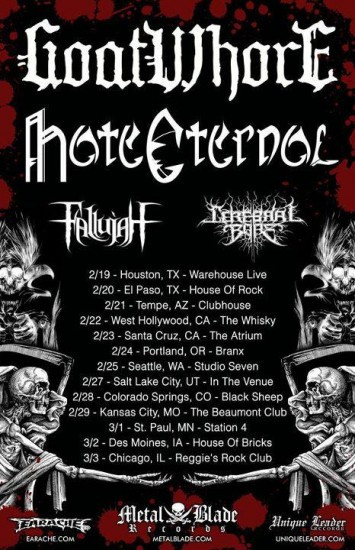 Yesterday, I was whining about the INFERNO Metal Festival in Oslo Norway this April — exciting line-up of bands, too fucking far away for me to see. One of the comments on that post, from Kazz, pretty much summed up my feelings about the matter:  “Sometimes the Atlantic Ocean just pisses me off.” To which I responded, “Damned ocean. If it were only smaller, we could kick the shit out of it.”

But look! Now we have help with the shit-kicking! This morning I saw the announcement about the tour featured in that flyer up there. Now THAT is going to be one skull-fucking abomination of a musical extravaganza. It will be particularly sweet because the tour starts only four days after GOATWHORE releases their new album on February 14, which was recorded by Erik Rutan at his Mana Recording Studio in Florida.

And speaking of Erik Rutan . . . HATE ETERNAL! Hells yeah. No one puts the power drill to your cranium quite like Hate Eternal in a live setting.

Oh, and speaking of boring holes in your skull . . . CEREBRAL BORE, all the way from Scotland! And fucking FALLUJAH on top of that!

I’m not saying this is better than Inferno Fest, I’m not saying that we’ve found the secret to subjugation of the Atlantic Ocean, but it do make me feel a damned sight better than I did when I was whining yesterday — because this death metal juggernaut will be stopping in Seattle, which involves no Atlantic Ocean crossing for me to reach. Maybe it will make a stop somewhere near you, too. The full schedule is after the jump. And because these four bands are now on my mind, I’ve got videos from each of them after the jump, too.