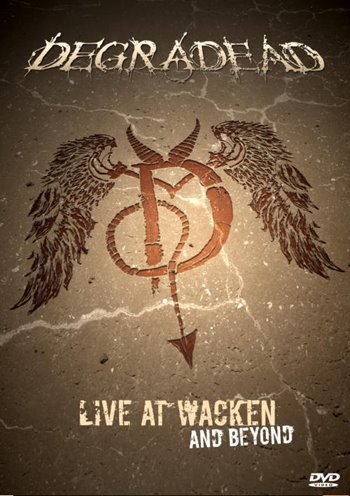 This is turning into a melodic death metal kind of day. We started off cranking a new song from Costa Rica’s Sight of Emptiness, and now we’re jumping the Atlantic to check out the latest video from Sweden’s Degradead.

The last time we wrote about this band was May 2011, when we featured two songs from a new Degradead album (their third) called A World Destroyer, which had been recorded at Peter Tägtgren‘s (Hypocrisy, Pain) Abyss studios in Sweden, with producer Jonas Kjellgren (Scar Symmetry,Centinex, World Below). Now we’re on the verge of a DVD release by the band.

On February 28, Metalville Records will release Live At Wacken and Beyond, which will include Degradead’s complete live set at Wacken Open Air in 2010 plus some other features, including a documentary tracing the band’s progress from their formation outside Stockholm through their tour of India last February.

The DVD also includes an official video of one of those songs we featured the last time we posted about this band — “Human Nature” — and Metal Injection premiered the video yesterday. Based on the video, I think it’s fair to say that Degradead doesn’t have a very rosy view of human nature. And as for the song — the song still fuckin’ rocks.

Degradead has some ties to In Flames that go back to the recording of their first album at the IF studios, with the album being co-engineered by Björn Gelotte and co-engineered by Jesper Strömblad, Peter Iwers, and Daniel Svensson. “Human Nature” is very much an example of Gotheburg-style melodic death metal — no molds being broken here — but damn is it a catchy piece of headbangery. Here’s the video: