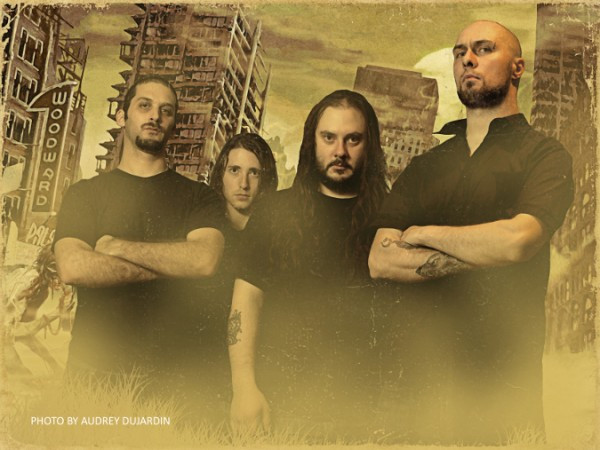 (This is the first of two reviews we’re publishing today of the new album by Aborted. Phro, a displaced American forced to take refuge in Japan, is the author of this one. He also made suggestions to Aborted about how they might re-word the album and song titles. Shockingly, they didn’t change any of the titles. But they did let us premiere the full album stream of the new album, which you can find at this location.)

So when Islander sent me the album for review, I had no idea what I was getting myself into.  I’ve experienced the hallucinogenic side effects of great death metal and grindcore albums before…but even so I was hardly prepared for this soul rampage.  It’s not because it’s the most br00t41 thing this side of cutting tin with a chain saw—no, there’s melody woven into this chainmail blanket of angry hatefuckery.

In fact, it is precisely this use of melody that makes the reptile beast, jerking off and eye-fucking saggy-titted old ladies on the train, need to kill.  The melody homes in like a laser sight on that dull lizard lolling about in your lower brain and then drops about fifty billion metric shit-tons of grrarrrfuckshitpissraaaaawrrdetroyyourfuckingfacerrrrr brutality right on that stupid tongue flicking motherfucker.  Pure, goddamn obliteration.  Total fucking wasteland.

Unfortunately, not all brain-lizards really care much for the brains within which they dwell.  Mine hates me more than those stupid fucking worthless pieces of shit the Westboro Baptist Nuttybars hate Bert and Ernie.  And, apparently, so does Aborted.

Listening to the album as I took the train to work, I barely noticed the little malformed lizard  growing more and more agitated.  Occasionally, a particularly drunk sarariman makes me wanna strangle him with his own tie, decapitate him, and then shit down his neck stump…but who hasn’t felt that before?  So, the desire to chug ex-lax and wasabi to spray burning shit everywhere seemed pretty normal.

But this turned out to be a more sinister force…like brown acid mixed into the potato salad at a Midwest evangelical fundraising event, it bombarded my brain until the lizard was free and scrambling madly for the controls.  And, like those poor bible thumpers tripping balls and thinking it was the end times, I, all at once, realized I wasn’t in control when “Expurgation Euphoria” started with its bass drops as heavy as the meteor that fucked the T-Rex in its skullhole.

I was just about to stand up for my stop when WHOMP!!  a bass drop fisted my mouth.  Just…the whole fucking thing like a meaty sumo cock jumping down my throat.  And it was MY goddamn fist!  I was struggling to get my hand out of my mouth when the other fist straight pummeled my dick as if it were my first time back on the internet after twenty days stuck on a life raft without lotion.

“Aborted!  You hideous bastards!” I thought to myself as my other hand reached out and slapped the six foot tall construction worker next to me.  I don’t need to tell you how much it hurts to have your head shoved through shatter proof glass, right?  I tried to fight back, but Aborted and the lizard were in control of my body.  As the bass drops, horny-demon vocals, and flesh-rending guitars intensified, I tried to will myself to fight back…but instead found myself groping his girlfriend’s breast.

I only caught a flash of his eyes before he smashed my head into the pole. It was a look of pure hate…the kind of hate that makes Nazis take a step back and go, “Whoa. Maybe that’s a bit too much hate.  Maybe we SHOULD give peace and multiculturalism a chance.”  It was also the hate that I could hear in my ears…the hate of a million drunk Belgium soccer fans punting me in the dick simultaneously for no other reason than that they thought it looked fun.

He ripped my head out of the hole in the glass, picked me up, and body-slammed me on the ground like a Raggedy Ann getting beat by a pissed off, drunk Raggedy Andy.  As I lay bleeding on the floor, I felt the train jerk to a stop.  The construction worker tripped and his knee knocked half my teeth out as he fell and cracked his skull on the floor.  I passed out.

As I started to thrash about, I had the vague feeling that Aborted had thrown a saddle on the reptile and was riding it like a drunk bull rider.  Suddenly I found myself standing.  I looked down the aisle to see cops coming into the train car, waving pistols and screaming at everyone.  Something bit my thigh, and I realized the girlfriend was still hungry.  Why the fuck was she trying to eat me???  I watched myself shove her off me, tear open the closed doors, and…

Whoooooooooooooooooosh…  As I fell, a solo danced through my ears like a ballerina, only to end when I hit the ground like an 18-wheeler crashing through the wall and flattening her.  I’m pretty sure half the bones in my chest broke and at least one kneecap just popped out and got stuck to a tree.  I buried my face in the ground, my whole body throbbing to the PCP-induced maniac pace of the music.  I sighed and breathed in a chunk of dirt.

Coughing and sputtering like a shitty Donald Duck cartoon, I realized I wasn’t alone.  No…there were monsters here.  Horrifying, ableit tiny, monsters.  Of the 6- to 12-year old variety.  Elementary school students.  My sworn enemies.  DAMN YOU, ABORTED!! HOW DID YOU SUMMON THESE HORRORS OF HORROR, THESE SLIMEY SOUL-SUCKERS OF SLIMEY SOUL-SUCKINGNESS???

I slowly stood up.  Children aren’t all that bright, you see, so I hoped that if I made no sudden moves they might not notice me.  I was wrong.  I couldn’t actually hear them over the sound of Aborted fucking my psyche with a barbed-wire strap-on (Sven had it strapped to the tip of his dick), but I  could see their tiny, disgusting mouths open as they charged me.  I looked around for a wire hanger, but no such luck.  “Oh, well,” I thought to myself, “I guess it’s time for a good, old fashioned  CHILD BEAT DOWN!” 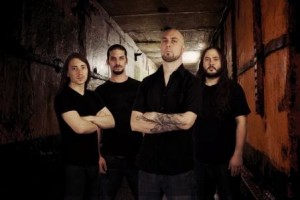 The first one approached with his hands wide open like he was coming in for a hug.  A solid kick from my boots popped his head off like a broken Pez dispenser.  I used my exposed finger bones to rip the throat of the next one who came at my trying to bite my calves.  One of them jumped on my back and took a bite out of my neck, so I just fell backwards and squished him like a cockroach.

That turned out to be a worse idea than I’d thought, as they now dogpiled on me like starving piranhas going at a cow.  Their teeth tore at my flesh, and the sting of dirt rubbed all over my exposed skin brought man-tears to my eyes.  Then it brought little whiny tears.  But I got lucky and was able to grab one by the throat.  Swinging him around, I knocked the other back, and leapt to me feet.  I felt something like hell flow through my ears into my blood and flood my muscles.  I felt like I could shoot cum lazers from my eyes, but that was probably just a hallucination.

Let me tell you, nothing assists in fucking up a playground full of blood-hungry kids like deathgrind and the jagged bones of your chewed-up fingers.  The music thrived in my ears and brain—hot and sticky like an overgrown petri dish of rapidly reproducing genital warts.  The solos sung like undead valkyries eating out sirens who were, in turn, eating out a horde of harpies.  I picked kids up and used them like nunchucks to the rhythm of the blast beats and slashed their eyes out with my finger bones, inspired by the heinous fury of the unrepentant riffs.

Like a teenage mother drunk on Everclear, I beat those kids brain-dead until the album ended and Aborted finally lost control.  Finally, I fell to my knees in a pool of child blood and my nose exploded as pent-up reptile semen exploded out of my face.

Five days later, I woke up in a maximum security prison with no fingers, no nose, only half my teeth, and a lacerated cock.  (Apparently I tried jerking off despite having been in a coma.)

FIVE EXPLODED COCKS OUT OF THREE!!!

This is the album you put on when you’ve finally had enough of the world and you want to go out fighting.  Put your headphones in, find a gallon of gasoline, a box of matches, and a skateboard.  Then, go to the local zoo and herd the lions and tigers and bears into one cage and make a ring of fire.  Use the skateboard to fight the beasts until they rip your eyeballs out and feast on your soft, plump intestines.  I promise, as long as this album is in your head, you won’t even care until long after rigor mortis has set in and the coroners have used your last boner for ring toss.

[EDITOR’S NOTE: Global Flatline will be released by Century Media on January 24. To wallow in more things Aborted, visit their official site via this link or their Facebook page here.]