We goat-throwers do like our guitar wizardry. We like other things, too, but bands who bring the shred generally light up our pasty white faces with a beaming glow. If you listen long enough and widely enough, of course, mere speed and dexterity no longer give you quite the same rush as they did in your listening infancy. You look for more — you look for creativity, a certain tone, a certain feel, some heart and soul, even . . . dare I say it . . . intelligence — along with the ability to trigger the headbang reflex, of course.

When a band is able to marry that kind of guitar talent with song-writing ability, performance skill at the other positions, and a knack for fusing diverse musical styles, you get something special. Revocation’s David Davidson and company pulled that off when they made their first serious splash in the scene during 2009 with the release of Existence Is Futile. I think we’re about to get wet from a similar splash on January 26, when Bloodshot Dawn releases their self-titled debut album.

This UK band features two lead guitarists — Josh McMorran (who is also the lead vocalist) and Benjamin Ellis (who also contributes backing vox). When you cut right down to the bone, the songs on the album really serve as platforms for them to strut their stuff. That’s not to say that the rest of each song is composed of filler — far from it. But what makes the album such a stand-out, and each song such a kick in the head to hear, is the space it gives these two to show what they’re made of. And what they’re made of is win. 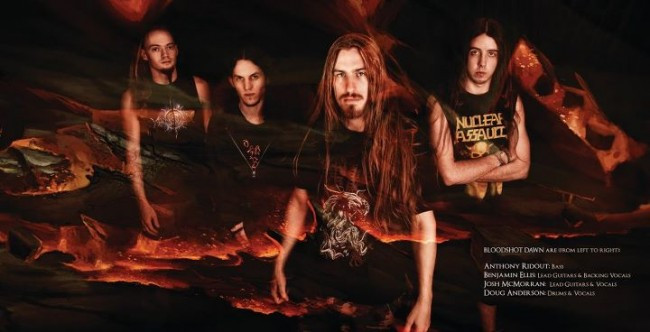 Take the album’s opening track, “Beckoning Oblivion” as an example. After a sweeping orchestral introduction made heavier by a martial drumbeat near the end, the song explodes in a flurry of pulverizing riffs and hard-hitting rhythms, punctuated by an explosive breakdown filled with a suitably diseased guitar lead. It all sounds really fine, but at about the 3:30 mark, a very strong song becomes an eye-popping experience when the guitarists take off in a tandem of soloing that extends for more than a minute and a half. While the rhythm section continues to hammer away relentlessly, the guitars spin out flaring arcs of fire, mixing tones, speeds, and atmospheres, culminating in a pile-driving finish.

Almost every song includes similar gems — extended passages when Ellis and/or McMorran steal the show, delivering everything from smooth, swirling, echoing flights of winged notes to white-hot blasts of flamethrower shred that peel paint from the walls. You get melodic duets, incandescent passages that spin like tops on fire, and soulful explorations of prog-metal extravagance. When I heard this album for the first time, I found myself waiting for it — waiting for the time in each song when they’d turn on the afterburners and send the music into overdrive.

The guitarists happen to be good at other things besides delivering memorable melodic leads and jaw-dropping solos. With drop-tuned brutality, they also execute the kind of hard-punching, ass-kicking, rapid-fire rhythm riffs that feel like Decapitated or Krisiun have joined the party. In fact, it’s those technical, jabbing riffs combined with a tightly integrated rhythm section that provide the heavy-as-fuck foundation for all that exuberant soloing.

And speaking of the rhythm section, Doug Anderson is a beast of a drummer — but he’s a beast with finesse. Sometimes, he’s just keeping time, augmenting the music’s powerfully heavy low end; sometimes he goes on the attack, which is a head-cleaving thing to behold; and sometimes he detonates an explosive bass drop at just the right moment. He seems to have a great feel for what patterns and progressions will best suit what’s happening at any given moment in each song. 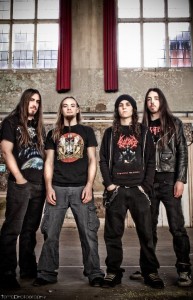 His partner in crime, bassist Anthony Rideout, is no slouch either. He needs to be very fucking nimble to keep pace with McMorran and Ellis, and fortunately, he is.

For the most part, speed is the name of this game, with thrash in the driver’s seat of a machine that also incorporates components of melodic death metal and progressive metal. But even over the course of 11 songs and more than 50 minutes of music, Bloodshot Dawn somehow don’t fall prey to the failing of sameness.

Part of that success is attributable to their skill in whipping up distinctive intro’s for each song, which contrast nicely with the finish of the song before. “Vision” bolts from the gate with a blizzard of rapid-fire riffs and a brief, blistering solo. On “The Quantum Apocalypse”, you get an almost industrial-sounding rhythm punctuated with an atomic bass drop. And at the start of “Sickening Dogma”, you get big, slamming chords and an all-out drum attack as a way of launching the most eviscerating, death-metal oriented song on the album, one flavored with the buzzing and grinding of morbid tremolo riffs.

As for the production, the album sounds . . . amazing. The mix is beautifully balanced, the sound sharp, clear, and massive. When those guitar solo’s start to take off, they leap forward in the sound or build in volume with quickening intensity, depending on what effect best maximizes their impact. I guess I shouldn’t be surprised — the album was produced, mixed and mastered by Stefano Morabito (16th Cellar Studios in Rome), who has performed similar wonders for the likes of Fleshgod Apocalypse and Hour of Penance.

I guess it’s pretty clear by now: I really didn’t find anything disappointing about this album. For a debut effort, I suppose it might be traditional to say that the album is a strong start and a portent of even greater things to come, but in this case, such comments would be dishonest — because this is already a thoroughly mature, fully successful work. In an nutshell, Bloodshot Dawn’s debut album is a shockingly strong explosion of fused thrash and melodic death metal, driven by a guitar duo who have bright days ahead of them. I’ll be surprised if we see a stronger debut from anyone this year.

The band have premiered two songs from the album so far (one of which we featured at NCS much earlier this month), and a video will be coming this spring. Check out these two badass tracks:

To download “Godless” for yourselves, either visit the band’s Facebook page here or their SoundCloud player at this location.

You can follow Bloodshot Dawn on Facebook via this link, and at MySpace via this one. The new album and other merch are available for purchase here.

January 26 is the date for a limited self-release of this album. Naturally, Bloodshot Dawn are looking for a label to help with broader distribution.  I really have to believe that’s going to happen.

Now, last but not least, here’s a post-script about the artwork: It’s by the wonderfully talented Pär Olofsson. And wait until you see what else he has done for the CD insert. This is definitely the kind of album where having a physical copy will be worth the price. 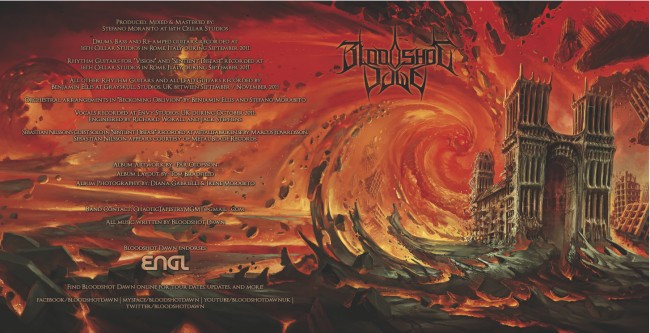 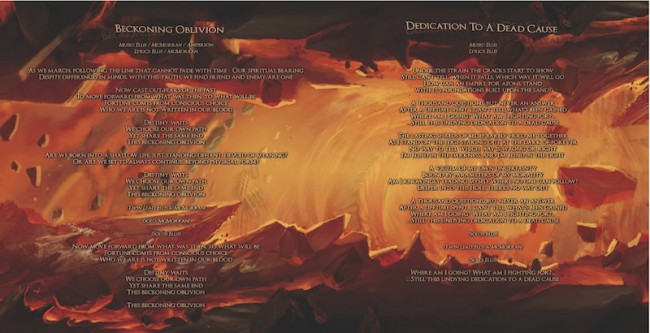 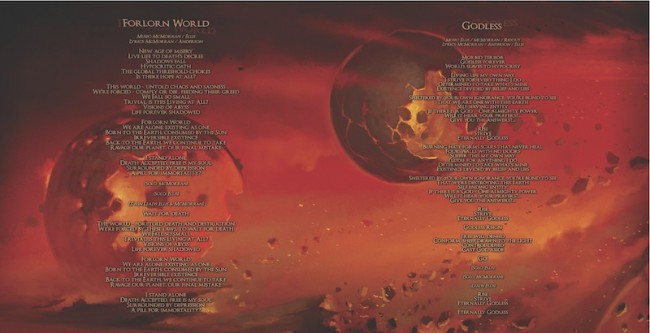 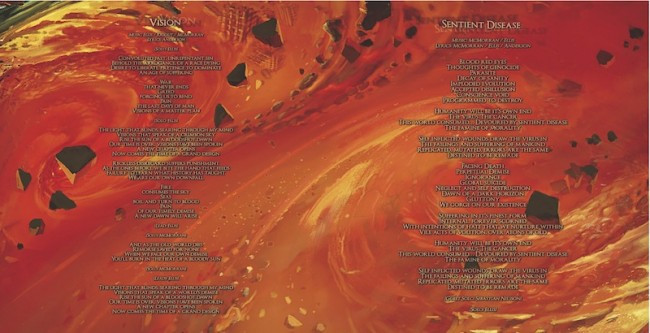 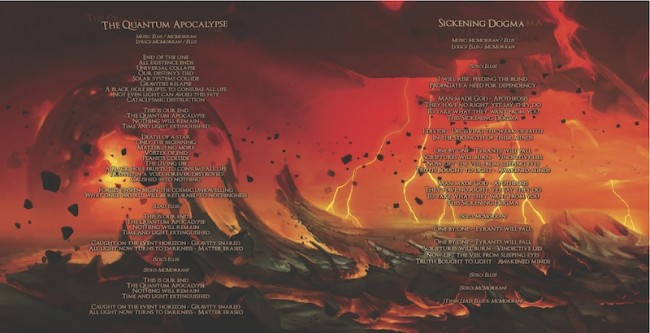 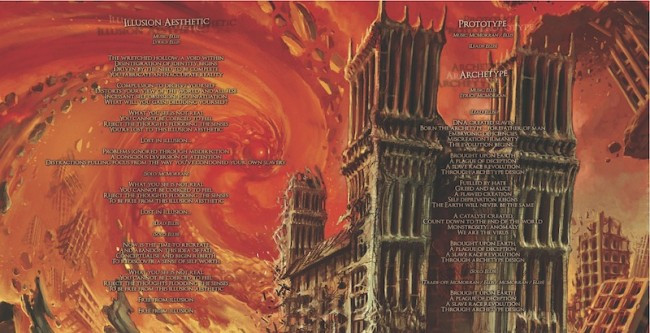 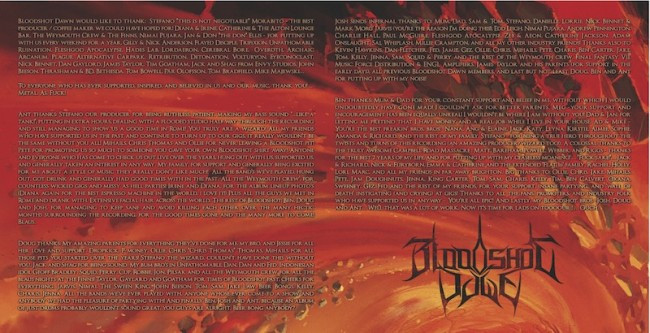