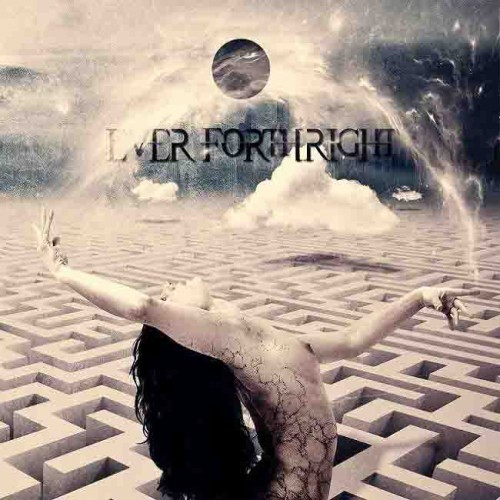 (TheMadIsraeli has been trying to sort out his feelings about the self-titled debut album from New York’s Ever Forthright, who we first wrote about back in June 2010 when they were a purely instrumental band. Finally, his feelings are all sorted.)

This album has been like a torrid love affair with the hottest junkie street whore with a Ph.D. in philosophy.  I’ve been so back and forth on this fucking thing it’s why I never got around to reviewing it.  But after many listens and a shit-ton of soul searching, I’ve finally decided this thing’s a fucking winner, if nothing else for its ambition, scope, and commitment to craft alone.

Ever Forthright is probably going to launch themselves to the top of the tech-djent heap here within this next year by bringing forth EVERYTHING about this style that is great and makes it worthy of fascination, while being COMPLETELY devoid of any Meshuggah copping.  The fact that I went back and forth on my take on this album 20 times in seriously considering it tells you how much of a trip this was for me.

Ever Forthright’s debut is an ambitious one, clocking in at fucking 77 minutes in 12 songs and boasting a very diverse song catalogue. You have the low-end, punchy, open/closed note riffing, the technical widdly widdly’s and meedly meedly’s, and plenty of the Berklee jazz education breaking through to the surface, combined with Chris Baretto’s exceptional saxophone playing and a bit of deathcore brawn.

“All Eyes On The Earth” is a superb stage-setter for an opener, recalling the stylings of Periphery and Sikth, delivering superb melody-to-dissonance counterpoint and providing one of the most brutal breakdowns I’ve ever heard — a full minute and a half of being pummeled over the head with a goat’s jawbone until your skull splinters into your brain and you die from massive hemorrhaging.  The riffs are punctual yet all over the place, grooving yet aflutter; it’s absolutely fucking nuts.  The song is brimming with enough energy to power an entire nation and is a sufficient piece of ass-whoopage to get you attuned to the experience that is Ever Forthright. 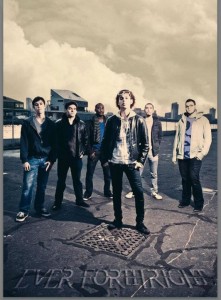 “Latency And Tendencies” is a more reserved number that wraps itself around a central musical theme and doesn’t do much to deviate from it, but instead varies it with extensive reinterpretation.  The main riff stays the same, but the additions, counterpoints, and departures that are layered on top make it interesting. It’s a feat that another band probably couldn’t pull off.  In other hands, this song could’ve become a boring-ass groove lasting 6 minutes without the diversity of variation that Ever Forthright builds around the song’s central part.  This is also the first we hear of Chris Baretto’s switch from vocals to saxophone in the song’s laid back interlude, which brings to mind nothing so much as a jazz lounge.

“The Little Albert Experiment” is an extremely layer-focused piece.  The guitars are almost always doing two entirely different things at once, and the song showcases the compositional insanity that is guitar duo Nick Llerandi and Billy Anderson.  The song has a nice groove to it, and Chris Baretto comes up with some downright strange vocal melodies and walls of harmony that ring with a sort of beautiful dissonance.  The song’s outro is the highlight for me, a twisted melody in classic jazz fashion with a slithery sax solo thrown on top of it.

“Lost In Our Escape” is definitely the most musically tame song on the album, but it’s also the catchiest.  It includes excellent soulful melodies (once again, courtesy of Baretto’s genius ear for vocal lines and rhythm), with his deathly brutal roars complementing his cleans as an efficient emphasis when it’s needed.

“Screen Scenarios” is like an intermission-style rehearsal of everything Ever Forthright has beaten you over the head with thus far.  It’s a borderline 10-minute epic full of compelling, unexpected transitions that makes more than proficient, full use of those 8-string guitars, utilizing every aspect of their range to create a raging sea of like, EVERYTHING.  Whether it’s the clean intro’s apprehensive and twisted mood or the song’s massive chorus that cries out like an anthem of sorts, this song has it all.

The definite showcase of this song, though, is its outro, an angular classic jazz progression that is then reinterpreted into a breakdown that punches a hole straight through the earth and out the other side.  Every time I listen to this song, I feel like I’ve just been beaten to death by a tidal wave composed of nothing but basketball-sized chunks of hail.

“Spineless” changes the direction and mood of the album entirely with an extremely brutal deathcore assault, augmented by mathy elements and an awe-inspiring display of Chris Baretto’s vocal power when he decides to turn into the fucking Hulk.  Ever wanted to know what it would feel like to be crushed in a trash compactor while trapped in a tornado of bull hornets?  I’m pretty sure that listening to this song comes somewhere close to that feeling. Once the song’s ending breakdown hits, you’ll more than likely be breaking your head open on your bedroom walls because it’s so brutal and you can’t achieve another physical sensation to match it. 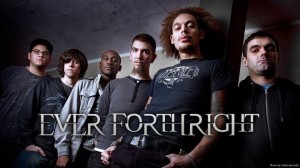 “Reflections” serves as an outro of sorts from “Spineless”, transitioning from deathcore-like brutality to lounge-mood beauty.

“The Counter Shift” is the most chaotic song on the album.  There is no fucking order, no cohesion, no sense of what melody goes over what or what dissonance or atonality should or shouldn’t go with what.  It’s chaos abounding, with no perceivable fucking structure to be found anywhere — and that is what makes it one of my favorite songs on the album.  It’s got a fucking SINGLE CHORUS with the most fucked up vocal melody I’ve ever heard, and the piano and 8-string drone outro sounds like the entrance to the twilight zone.

But “Infinitely Inwards” is where things get really fucking weird, strange, obtuse, and downright confusing.  It’s one of the more melodic songs on the album, it’s got the most memorable chorus on the album and the best, most straight-foward melodies,  but . . .

I’m not lying.  Do what you will with that shit.  But we’re not done yet.

“City Limits” was described to me by guitarist Billy Anderson as “a heavy Michael Jackson love song”.  I didn’t believe him.  I thought it was a cute, ironic hipster description of the song, but it turns out that he’s fucking right.  It’s fucking pop-djent.

“Dispose Of Your Optimism” is Ever Forthright’s signature tune.  It’s the most technical song on the album, guitar-wise, and the least experimental and most powerful if you ask me.  It’s a terrific pre-closer song, bringing a climactic build-up to the end of the album.

“Clockwork” is a very no-bullshit song and an ideal choice for a closer.  It’s got good melodies, heavy-ass riffs, and a terrific piano performance.  It is pretty much the band just throwing the fuck down and providing something of a nice “credits sequence” feel as the album draws to an end.  In other words, the music makes the listener know that the album is really ending — it’s not just the last song on the track list.  However, the song itself does finish on a sort of “to be continued” note. Not sure whether this was intended, but either way, it concludes the album satisfactorily, while leaving you wanting more. 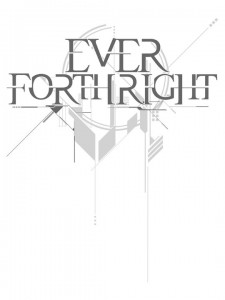 I loved this album, then I hated it, then I loved it again, and that has been the story of my struggle with it.  I figured I’d best review it before I hate it again.

But maybe, just maybe, when an album can tug at you so strongly and affect your mood so dramatically, that is a kind of proof in the pudding that the band in question is really onto something.  Ever Forthright has taken things to a new, challenging level. Let’s hope the rest of the djent scene steps up to this challenge.

Below is a full album stream from Ever Forthright’s Bandcamp, where downloads of the album are available in both vocal and instrumental formats.  It’s also available digitally at iTunes and Amazon mp3, and you can order the CD and related merch at this location.  Enjoy.

16 Responses to “EVER FORTHRIGHT”