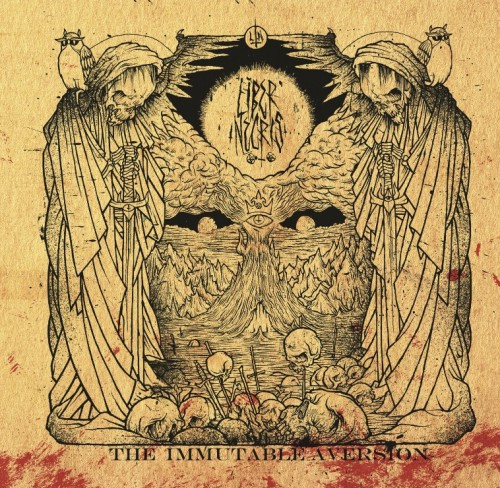 I’m ridiculously far behind in listening to EPs and albums that bands have sent to NCS over the last couple of months. Hell, I’m embarrassingly far behind in even answering the e-mails from bands who sent us music to hear, which is just plain rude. But I’m going to make an effort to catch up, beginning today.

Long ago, in dog years, we started this EYE-CATCHERS series as a way of unscientifically testing the hypothesis that if album art is cool, the music on the album is probably going to be cool, too. Of course, that hypothesis doesn’t make much logical sense, but then again neither does turning water into wine and lots of people seem to buy that, so who knows? Since we started, this series has branched out to include features on metal artwork, in addition to music, but today I’m going back to the original idea.

Liber Necris (“book of the dead”) is a UK band who wrote us in December. The first thing I noticed, even before reading the words, was the cover art you see above for their debut EP/demo, The Immutable Aversion. I thought it was really well done. The artist is Drew Millward, who has created album covers for other bands, in addition to many shirt and poster designs and much else besides (you can see more of his creations via this link), and we’ll have more of his art for Liber Necris at the end of this post. As soon as I saw the art, I resolved to listen to the EP. That was a good decision. 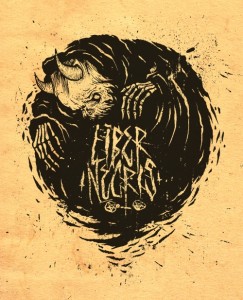 Musically, Liber Necris live in those blasted death-metal badlands somewhere close to the outposts of Vader, Decapitated, and Immolation. Though the music isn’t as down-tuned or distorted as the old-school Swedish cemetery-stalkers, there’s still enough heft in the music to force the air from your lungs like the last time you got punched in the kidneys — and man, didn’t that hurt like a motherfucker? Plus, it’s fast and unhealthy.

The music features rapid picking and rapid kicking. Fiendishly jabbing riffs keep company with chords that moan and bray, and brutish bass lines partner up with heavy-armament drumming. Minor-key melodies accented by tremolo-picked leads give the enterprise an air of morbidity, and cavernously deep vocals conjure images of pissed-off bears on a rampage.

You might feel like raising both arms to the fist-pumping groove, but there’s enough of a blackened vibe that you might think that would be un-cool (or un-kvlt). Better to just bang your head with your eyes rolled back, the whites showing, and a demonic grin on your face.

The EP has a good sound. It’s got the weight you want and the diseased miasma you expect, and that’s not surprising because the music was recorded, mixed, and mastered by the Weislawski brothers at Hertz Studios in Bialystok, Poland (they’ve done the same evil deeds for the likes of Behemoth, Decapitated, and Vader.

To let you make up your own mind about the music, we’re going to give you a menu of choices. First, to hear all the songs on the EP, we have a Bandcamp widget below. Second, to buy the EP for 2 British pounds, we have this link. And finally, we have the band’s permission to make this song avalable for free download:

To finish off this post, here’s some more album art from Drew Millward: