For most of today, I’ve felt like killing myself. Not because I’m depressed — I’m one of the least depressed people I know — but because I partied beyond my limits last night and have been paying for it with a cataclysmic hangover. It’s one of those hangovers that’s so vicious, I suspect it will still be punishing me when I wake up tomorrow, too. Correction, not when, but if I wake up, because the fucker is so vile that death has seemed like an attractive alternative.

But things are looking up. I’ve had a crisis intervention, a reminder of why continuing to live is worthwhile: I listened to a brand new, free, three-song EP by a Dutch band called Mondvolland. The name of the EP is Pestvogel, which means “plague birds”, and which coincidentally is the avian species that I believe has been roosting in my head all day. Pestvogel is stupendously good; in fact, I can testify that it has life-saving properties.

Mondvolland was formed in 2005 by Martijn on guitars and vocals and Mickeal (Heidevolk session member) on bass and vocals. They released a debut album in 2010 called d’Olde Roop. I’ve not heard it, but I gather from reading about it that the music was in the vein of blackened folk metal. Pestvogel, then, represents a change in direction, a turn toward more thoroughly blackened music. The band also now features a second guitarist (Harold) and Kampfar’s drummer, Ask.

I fell for the title track, “Pestvogel”, in the first 20 seconds. The immediately infectious riff, the big, rumbling bass, the pounding drums — they hooked me from the get-go. The rest of the song was a big payoff, too. The music is hard-charging and dynamically varied. The vocals effectively combine traditional, raking, black-metal howls and folkish clean vocals; the guitar tones and styles range from hammering rhythm chords to whirring, tremolo melodies, to clean guitar leads; the drums move from solid, rock-style beats to a blur of blasting; and that rumbling bass is never far away. It’s just a dynamite song. 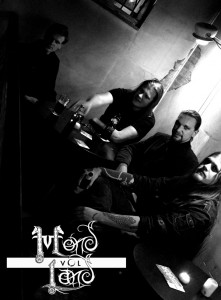 “Onzalige Bossen” rips and slashes from the beginning with a blaze of blasting drums, a haze of melodic tremolo chords, and bursts of caustic, black vocals. That very present bass, both massive and nimble, and the booming drums give the song a heavy undercarriage and a compulsive rhythm. It’s a straight-ahead black metal song, but one that’s memorably melodic as well as thoroughly invigorating.

The last song, “Mooi Ann Van Velp”, is a dramatic change of pace: The entire song is an acoustic guitar instrumental. Something to be brushed off? A throwaway track? Not at all. The musical style varies from something almost baroque to a flamenco-influenced whirl and back again. It’s a song that does more than prove Harold’s talent as a guitarist (I’ve been informed it was he who wielded the pick), it’s a fine piece of music that contrasts with and complements the first two songs, and I really had fun hearing it.

Pestvogel proves that Mondvolland is a name worth remembering for the future. The band have a SoundCloud page that is streaming all three songs, and I’m linking to that at the end of this post, but some of you may be reading this post on SoundCloud-challenged devices, so I’m going to stream them through our audio player, too:

In Dutch “Mond vol land” means “mouth full of earth”. The name was inspired by a local folk story in which giants created the hills and forests of Montferland, the birthplace of the band’s two founders.

Pestvogel was released on January 28 and can be downloaded for free at this location:

Bob Mollema did the EP’s artwork, and I think it’s great. The art for both the front cover and the back are included in the free download.