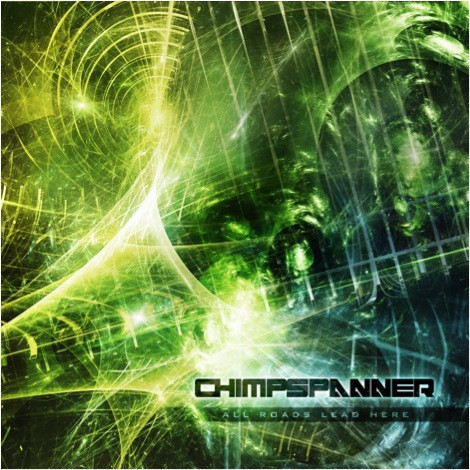 (TheMadIsraeli reviews the new EP on Basick Records by the UK’s Chimp Spanner.)

Some of you may know who this is, but I have a feeling a lot of you NCS readers won’t know. Nothing wrong with that; the music of Paul Ortiz, or Chimp Spanner, long evaded me, too, despite being around since 2004. What do we have in store for today?

Paul Ortiz is one of the most tasteful metal guitarists out there right now, utilizing tried and true influences in his own way to create some captivating stuff. There are traces of Meshuggah, moments that recall Soilwork, and PLENTY of Holdsworth influence pervading every facet of the music. In my humble opinion, his albums Imperium Vorago and At The Dream’s Edge are ground-breaking and top-notch advances in the instrumental metal market. Ortiz has now decided to release a new EP as an appetizer until his next album. This is All Roads Lead Here.

A humble and kind of drawn-out fade-in introduces the opener “Dark Age Of Technology”. A classic djent, open/closed riff, some very jazzy synthesizers, and contemplative expressions of thought conveyed through exquisitely phrased leads are the name of the game here.

As a guitarist myself, the way that Ortiz can almost speak with his melodies is something that really hits me hard. He has a lyrical sense in his playing, on top of the top-notch cohesion achieved through the encasing of his guitar acrobatics by the songs as a whole. In general, when I listen to his music I feel as though I’m achieving a state of sonic zen, but All Roads Lead Here showcases a much more mature Ortiz, someone more concerned with expressing emotions through his work rather than simply displaying his skills as a guitarist. The lead work on this EP is decidedly tamer than on previous releases, in that he doesn’t really bust out but instead performs punctual leads with a real purpose behind them. It’s obvious to me that he wanted memorable melodies this time around, themes that would stick in the listener’s head for days.

“Engrams” serves as a calming transitionary track, a clean piece that sounds like the thoughts of a man considering the meaning of life on his death bed. It serves to introduce the epic three-parter “Mobius”. The song carries itself with a weight of bludgeoning apprehension. It’s full of melodic concepts and themes that switch consistently between yin and yang — order and chaos, light and dark. It’s a compelling trip, one that should be taken on an LSD high.

“Cloud City” is a number that musically evokes its name. If you can imagine a video game of some sort wandering around cities in the clouds, this would be the song for it. A nice closer to be sure.

The mix on this album deserves a paragraph unto itself. Mixed by Paul Ortiz himself, this is one of the best sounding recordings I’ve ever heard. The guitars are punchy and metallic, the bass is round and very present, the drums have the right amount of attack without being too overwhelming, the atmosphere and mood achieved by this mix alone absorbs you.

All Roads Lead Here will be out on February 6. Go grab it when you can and support this wonderful testament to instrumental prowess. In the meantime, enjoy more Chimp Spanner: This is “Under One Sky” taken from At The Dream’s Edge.