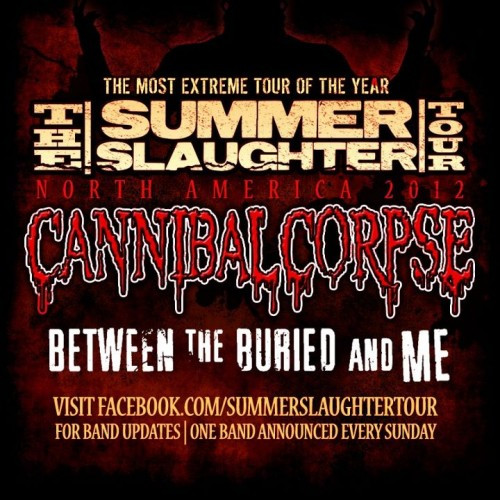 Well, just my luck that I put up that last post with updates about new U.S. tours and a half hour later saw the news about SUMMER SLAUGHTER 2012. Here’s the official statement:

“The rumors are true. Summer Slaughter 2012 will be the greatest bill in the history of the tour. Cannibal Corpse is confirmed to headline with special guests Between The Buried and Me. Each Sunday will see another confirmed band on the tour get announced via the SS Facebook page… It starts this weekend.”

So, the line-up will dribble out, drop by drop, like water torture, except it promises to be a good kind of torture, which happens to be the name of the new Cannibal Corpse album (Torture). Just judging from the first two bands announced, this tour is also going to include great musical diversity — a little something for everyone. I suspect that diversity is going to continue as the remainder of the line-up is announced, as has been true in past editions of this tour.

One Response to “STILL MORE TOURISM”