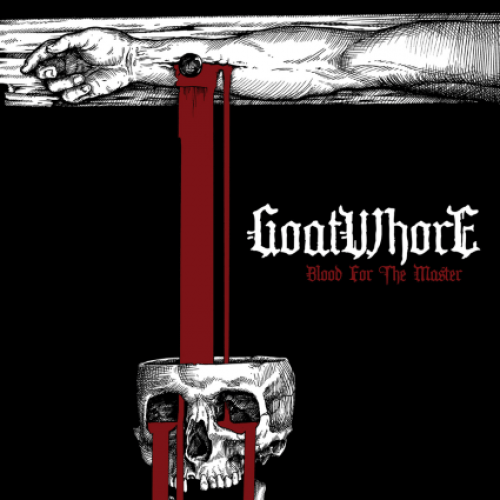 The first rule of Project Satan is . . . kill for the master.

If Goatwhore were a car, they’d be the were-car from Futurama, a savage, intelligent military car built from the most evil parts of the most evil cars in all the world. The steering wheel from Hitler’s staff car. The left turn signal from Charles Manson’s VW. The windshield wipers from that car that played Knight Rider . . . either that or the stalking murder-mobile from Stephen King’s Christine. Hot and nasty, definitively deadly.

“Blood For The Master” is a pitch-black muscle-mobile that runs on the blood of virgins, devouring the innocent and spewing out noxious fumes of poison thick enough to blot out the sun for a thousand years. Quite simply, it is the finest record the band have ever produced and a fitting soundtrack to the end of all things, a whiskey bottle in one hand, a straight razor in the other.

The record takes the best aspects from both their most recent breakthrough releases, the razor-sharp blackened savagery of A Haunting Curse and the sludgey death-march bludgeon of Carving Out The Eyes Of God, and mixes them up into something utterly toxic and bad for the environment. The production is utterly stunning, going one step beyond its predecessors’ thick and powerful sound by bringing back some of the bite of the more blackened guitar tone from A Haunting Curse without losing those thick, tangling bass tones and high-octane drum blasts. 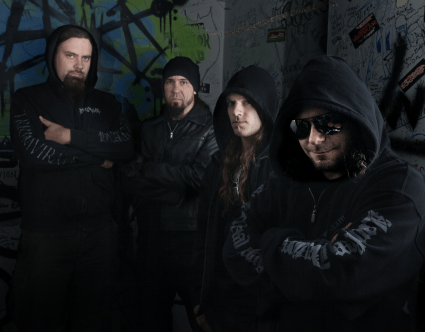 “Collapse Into Eternal Worth” and “When Steel And Bone Meet” see the album accelerating off the line with neck-snapping speed, its pulsating engine roaring into life with furious blast-beats and pumping shotgun blasts of grime-encrusted, doom-laden black metal, delivered with a shit-eating grin and a cocksure strut. “Collapse…” twists and turns, cornering on a dime as it shifts gears between blackened blast-frenzy, cruise-missile groove (see the barbed and hooky bridge for the perfect example) and dynamite death explosions, while “When Steel…” is a bar-room brawl set to music, chains and fists flying in a drunken, grooving orgy of violence that manages to cram in a swaggering groove, pummelling power-riffage, and some switchblade soloing in barely more than 3 minutes.

“In Deathless Tradition” begins with a morbid, decaying haze of swamp-beast black metal, decaying chord progressions and quicksand chugging overlain with croaking, evil vocals drowning in their own bile. The more blackened vibe of the song sounds like hell’s own house band settling into a crushing, mid-paced groove as the damned drink themselves into a welcome oblivion, some bluesy, smoky solo work spattering the baying crowd with blood and semen until they beg for more.

The vocals are utterly unrelenting throughout, whether gargling and spitting up acid-drenched, blackened vitriol  or groaning beneath the weight of years of death and darkness. “Judgement Of The Bleeding Crown” sees Falgoust spitting venom at hyperspeed over whiplashing riffs and serpentine soloing, striking like a cobra over and over again, and filling the listener with poison and sickness while riff after riff piles up behind him in a demolition derby of ugly thrash dynamics and black metal savagery. The come-down from this is delivered by “Embodiment Of This Bitter Chaos”, a darker and more melodic number which goes down smooth, but leaves behind a lasting burn. The creeping acoustic opening sets the pace, opening up into a chugging, bubbling cauldron of head-banging riffage, topped off with a dizzying, headache-inducing solo.

The record ends with a triple-header of killer songs, “Death To The Architects Of Heaven” (one of the best songs of their career), “An End To Nothing” (an unforgiving punk-inflected blaze of smoky death metal ferocity), and “My Name Is Frightful Among The Believers” (one of the most virulent and spiky black metal tracks they’ve ever recorded).

“Death To The Architects Of Heaven” demonstrates that simplicity in design is not always a bad thing, not when the design is so perfectly lethal as this. Like a diamond-point drill, the song punches through the skull, unleashing demons and freeing the mind for blasphemous visions.  Lurching dissonance and creeping melody vie for attention, the raw and scraping guitars set off by the undeniably infectious chants of the song’s gleefully blasphemous chorus refrain, the air rich with the foul stench of tortured leather and burning brimstone.

Short, nasty, and brutish, “An End To Nothing” strikes with wrath, whirlwind roundhouse blows of anvil-heavy riffage sending the listener crashing to the mat time and time again, the band grinding their heel on the throat of those too weak and feeble to last the full 10 rounds. Time and again, the song drags the listeners to their feet with its spiralling guitars, only to knock their teeth down their throat again with a vicious punch of bone-breaking riff-force.

Closer “My Name Is Frightful Among The Believers” shatters all the windows and rattles the foundations one last time, a volcanic eruption of blackened melody setting the place ablaze with twisting tremolo runs and sand-papered vocals. Barbed hooks and flesh-tearing lead guitars cut deeply and mercilessly into fragile flesh, spilling blood across the killing floor, the band dancing manically in the ashes of the blazing inferno of black metal misanthropy and filthy sludge they have conjured up, praising the name of Satan to the corrupted heavens above.

The blueprints for the Goat-mobile are most definitely based on some classic designs; Crowbar’s growling sludge, Gorgoroth’s spiteful raving, Celtic Frost’s doomy aura, Obituary’s crawling death-rattle, The Crown’s satanic pride, and Exodus’ tightly welded thrash assault, all topped off with a hefty swig of Motorhead’s liver-killing bad attitude. But the end result is far from a mere sum of its parts, it’s a new beast entirely, a massive engine of dominance and destruction covered in scars and pentagrams, spewing alcoholic fumes of deadly menace. Audio carmageddon at its finest. Don’t think, just push play and put the pedal to the metal.

EDITOR’S NOTE:  Blood For the Master will be released on February 14 by Metal Blade Records. It can be pre-ordered (along with related merch) at this place. The band’s Facebook page can be found here. And in case you missed the official lyric video for “Collapse Into Eternal Worth” the first time we featured it at NCS, here it is again:

18 Responses to “GOATWHORE: “BLOOD FOR THE MASTER””