Sorry folks, I’ve been busy for a bit. Trying to build up the finances to buy some podcast gear and maybe do a radio-style show where I expose the Sacramento music scene to people. It’s all very tentative though and the initial hurdle is about $500 so I had to bury myself in work. ~ DGR

A few weeks ago, I found an article on Io9 that discussed the merits of why we should fear androids, mutants and cyborgs, because they will likely be the ones to kill us all, instead of the plain old robots that we have always feared. Like most Io9 articles, it was interesting but didn’t go into quite enough depth or explore many of the possibilities of how such a scenario could play out.

It’s a common problem for Gawker sites in general, so you can’t really fault Io9 for that. They usually do well with their astronomy articles (which are a personal rabbit hole of mine), and once you get past their habit of creating sensationalist headlines, you can usually get a pretty good read. It’s as if Carl’s Jr (Hardees for you heathens who happen to live west of Utah) started advertising their burgers as the GREATEST FUCKING THING EVER. You know it’s bullshit, but the food is still pretty good.

One of the thoughts that did come to mind, though, was that the left-hand image above, which accompanied that Io9 cyborg article, reminded me a whole hell of a lot of the Swiss industrial/electronica/metal group Sybreed and the cover art for their single Challenger (which is on the right). Maybe it was the whole gas mask/face mask imagery. Consider yourselves blessed that I didn’t go with my original reaction, which was that the image reminded me of the video for Nine Inch Nail’s Pinion off of the Broken release. Although, then I could’ve done a whole article on the merits of bondage and BDSM. Perhaps we should save that for another time…

Now Sybreed have been written about a couple of times here at NCS, scattered alongside various other bands like The Interbeing, The Amenta, and even Pendulum, which shows that their genre can be pretty amorphous. By using electronics as part of their overall foundation, the band have at times been characterized as electronica-metal, or as industrial metal, or even with the dreaded label of ‘Modern Metal’.

One of the things that triggered this whole adventure into some of my favorite stuff by them, in addition to the thoughts spawned by the I09 cyborg article, was the fact that things have been really quiet on their front. There haven’t really been many massive press releases with Sybreed’s name attached to them as of late, and the only new music most of us have heard is Challenger and its bevy of remixes.

That doesn’t mean the band have gone radio silent, because a glance at their facebook page provides information that the band have been pretty hard at work recording their new release God Is An Automaton. The name is pretty cheesy, so who knows if that will stick, but it seems like we’re somewhat far out from the release of the disc. All they’ve said so far is that it will emerge in 2012, so rest assured — sometime within the next roughly 330 days we may see some new Sybreed. Maybe.

But alas, exposing some new album news and linking you to the beginning of the Broken movie does not an article make, so instead, while I am in the mood for some Sybreed, I will instead ramble on about some of my favorite stuff from their most recent release (now old, but you know…), The Pulse Of Awakening. Before we begin, let’s get ourselves a really good look at the album art, which has been one of my favorite pieces. The imagery is actually pretty interesting, even though it starts on the right as just a simple picture of a skull, because hey, skulls are metal and they’re a metal band…therefore they should have a skull, right? 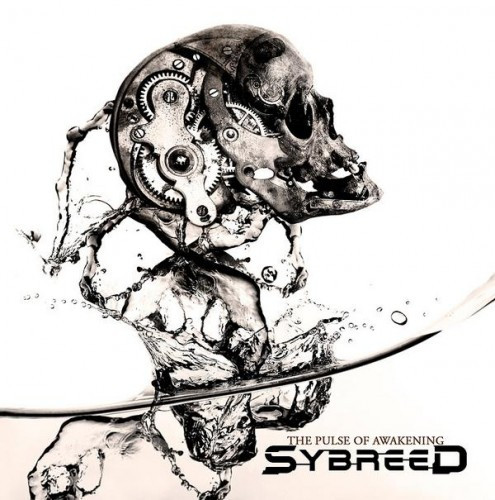 However, one of the things that makes this work for me is that most of the skull is composed of machine-like parts, which I think is incredibly evocative of what the band themselves sound like. Sybreed have that sort of precise, machine-like drive in their music that you would usually expect from a modern-day tech-death band, or even Meshuggah, whom Sybreed have been known to channel on a couple of occasions (then again, who doesn’t these days?).

So, one of the great accomplishments of the artwork for The Pulse of Awakening is that it conveys exactly how the band sounds. That doesn’t happen too often. Most of the time, you have to be knowledgable in depth about the genre of the band’s music to be aware of how the tropes used on a certain disc communicate how they sound. For instance, if you saw the artwork for Soilwork’s The Panic Broadcast (a decent album in its own right) and you had never heard of the band before, would you really be able to tell how they sounded by seeing it? Of course, I can save all these comparisons for another time, when we can get into a discussion about how the aesthetics of overall album packaging completes the whole experience of listening to music.

The fact that the cover for The Pulse of Awakening uses a simple color pallet is great, because you really don’t have this massive technicolor clusterfuck overloading your senses from the get-go. I imagine it also probably helps out a ton in keeping merch prices down since all they have to use is black and white. The fact that it looks like the skull is erupting out of water adds subtle dynamics to the whole thing as well. The inside artwork is also great, and you can view some of that here and at the home site of Septic Flesh’s own Seth.

The Pulse of Awakening is a good album, with a couple more faster-paced and heavier songs than those that appeared on the album before it, Antares. The songs also took a turn toward the more infectious. The single “Doomsday Party” was basically a pop song in disguise, but that still didn’t damage it. It even became the subject of a remix competition held over at Fixtremix.com (Fixt is the home label of artists such as Celldweller and Blue Stahli; we wrote about both of them a lot on TNOTB).

Sybreed’s own guitarist Drop has made a name for himself competing in the competitions at Fixtremix and has even had a few commissioned outside that specific label that have been pretty good. Among his personal works, my favorites are his take on Soilwork’s Distance and Crestfallen, and the remixes he did of Celldweller songs ‘The Lucky One’ and ‘Eon’. After listening to those songs and hearing the melodies he inserted into them, is it really so difficult to imagine that a song like “Doomsday Party” happened? Not only is it infectiously catchy, but both it and the remix by The Luna Sequence are complete ear worms.

My only disappointment with regard to “Doomsday Party” has been the fiasco that happened at the Rock Band Network and the fact that the song will likely never be ported over to PS3…so I can’t play it myself. Fucking assholes forcing me to go out into my garage and use my actual drum kit.

On the heavier side of things, another one of my Sybreed favorites has been “I Am Ultraviolence”. The destructively heavy machine-like quality of the band’s music that I’ve mentioned before shows itself in full force here. Even the sort of off-key vocal harmony fits the epic quality of the keys behind them. The electronic section that appears before the second verse is heavily harsh-EBM influenced, with about as much distorted bass as is humanly possible without turning the song into mere static. Groups such as Iperyt make use of that method to the extreme. If you want to hear a song that has been filled with distorted computer bass to the point of destruction, have a listen to any song off of Iperyt’s No State Of Grace release.

Speaking of pop songs that were on this disc, one of the more popular ones was their cover of “Love Like Blood”, which some of you may be familiar with from back when I was doing those goofy poll questions at TNOTB, such as, “Who covered this song better?!”. I actually like Sybreed’s take on the song more than the original, but I think it is because of the guitars added to it. I know, it’s a stereotypical thing to enjoy a cover song because it adds more guitars, but the song is still as catchy as ever. It just now has a good guitar riff attached to it.

Finally, I want to highlight “A.E.O.N”. I wish I could go through each and every song on The Pulse of Awakening, because out of the twelve songs on the album, I enjoy nine of them a lot, which is a pretty good batting average in my opinion. It’s rare for all the songs on an album to be zingers, but 9/12 is a really good success rate.

“A.E.O.N” is the most stereotypically Sybreed song out of all of the ones on The Pulse Of Awakening. It’s no wonder that it spread around the internet like wildfire when it was first revealed. If you needed a song to encapsulate The Pulse Of Awakening, “A.E.O.N” is a good candidate. It has the machine-like drumming and guitar playing with the slight hint of electronics that Sybreed are known for. It has the multiple vocal styles that are likely to appear in any Sybreed song and also features the appropriately epic synths that provide atmosphere to the whole thing. If you listen to “I Am Ultraviolence” and this song, you’ll note that the keys are doing almost exactly the same thing for a large part of the song, almost making them twins on the same CD. The difference is that “Ultraviolence” is exceedingly more heavy than “A.E.O.N”. Give this one a listen.

It’s not too often that I find myself musing on a band because of a picture, so you can thank (or blame) Io9 for this article. Sybreed are an excellent band, so I’m happy to spread the gospel of them to all who are willing to hear. I know there were more than a couple of fans for them back in the TNOTB days. Hell, the excitement over the single Challenger was palpable in the comments. It’s been nice to explore this disc again because it was one of those that had always been in the back of my mind to write about, but I had never built up sufficient will to do so. Maybe I’ll do one on Antares and the lovely artwork of Slave Design in the near future.

Also, now that I’ve opened the gates to Fixt, maybe I can sucker Islander into letting either Grover or me do a bit on the ‘That’s Music, But It Ain’t Metal!’ series for Celldweller. Here’s one more from The Pulse Of Awakening for the road in the meantime.

15 Responses to “CYBORGS MAY OR MAY NOT KILL US ALL, BUT SYBREED WILL PROVIDE A PRETTY GOOD SOUNDTRACK FOR THE EVENTS”