(Demisery is a two-man death metal project consisting of noted guitar whiz Keith Merrow and his partner in crime, guitarist/vocalist Gord Olson. TheMadIsraeli raved about their 2011 debut album Hive of Misery in his NCS review last November — an album you can stream and buy HERE.  Today, we’re happy to publish his interviews with Demisery’s dynamic duo. In this post, he talks with Keith Merrow and  in the next post, Gord Olson.)

This is so fucking cool to be doing an interview with you.  How are you today fine sir?

Hey thanks man, things are fantastic right now. Happy to chat with you!

Alright, so let’s get to the nitty gritty here.  How did you and Gord hook up, why form Demisery, and how do you feel about Hive Of Mutation in retrospect?

I met Gord a couple years ago. He had emailed me for some production tips, and I ended up doing a Skype lesson for him. We just basically hit it off after talking about our musical influences, and found that we had so much in common, musically. We’ve talked nearly every day since we met, and he’s just a great guy. He’s a wicked guitar player and has a knack for writing awesome old-school DM. We had talked about doing a collab on a death metal project for a long time. After he sent me a couple riff ideas he had, we basically just dove into it, head first. I’m really happy with how it turned out, in the end. We set out to make a traditional DM album, and that’s just what it is. It was cool to pay homage to our influences. 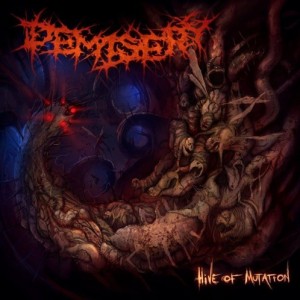 You’ve stated and have told me in conversation that death metal is really where your heart lies.  This is obvious when listening to Demisery, but there is also the solo material you’re known for.  Why is a brutal man such as yourself banking his name on progressive groove metal instead?

I think that there’s a bit of balance going on there. Everything I know, I learned growing up playing DM riffs. I also really enjoy groovy metal. I just play stuff that’s fun on guitar. I still think there’s quite a bit of DM influence, even in the more progressive stuff I like to write. While I’m definitely fond of old death metal, the groovy stuff is just where I ended up finding a more unique sound. The solo stuff feels a lot different to play, and it’s just fun for me.

Hive Of Mutation came crashing through the gates announced as an old school death metal album.  I certainly understand, sharing an almost unfair affinity for the bands of old.  Which raises the question, how does Keith Merrow feel about the modern death metal landscape?  Do you even pay much attention?

There are a lot of great, newer bands these days. Almost too many to keep up with! I’m just a fan of all types of metal. I try to enjoy it all. Some of the newer stuff is hard for me to get into, but I can definitely appreciate it. I’m not too picky, really!

You recently posted a video of yourself running through new material.  I’m assuming a new Merrow album is in the works, but are there ideas for a next Demisery record floating around already perchance?

Yes and yes. I’m currently working on some solo stuff, and there will undoubtedly be another Demisery record. It was far too much fun to not do it again. I’ve been stockpiling some riffs for both projects.

Any plans for you and Gord to make Demisery a live act?

As fun as that would be, I don’t think it’s in the cards. My life has become so chaotic the past couple years with college, that I don’t think I (or my family) could handle it.

If you could pick anyone to take the remaining positions to be filled, who would it be?

Name the 5 bands you think may very well be changing the face of metal right now, or that you at least are digging the shit out of right now.  New or old, doesn’t matter.

Tough question man! The face of metal has changed so many times, it’s hard to even imagine any more game-changers. But, these bands are definitely going places-

Kartikeya – A breath of fresh air to me. I love what they’re doing

Periphery – Great guys, and it’s not hard to see the waves they’re making. It’s been fun to see how far they’ve come, and where they’re headed.

Meshuggah – I can’t think of another metal band since maybe Metallica that has spawned so many “inspired” bands.

Obituary– Cause of Death

Suffocation– Pierced from Within

Nile– In Their Darkened Shrines

…I could go on all day. I have way too many favorites!

I had an awesome time doing this dude!  Keep us all informed about what’s going on in the Demisery and Merrow camps!

For sure! Thanks a lot for the chat!

One Response to “AN NCS INTERVIEW: KEITH MERROW (DEMISERY)”