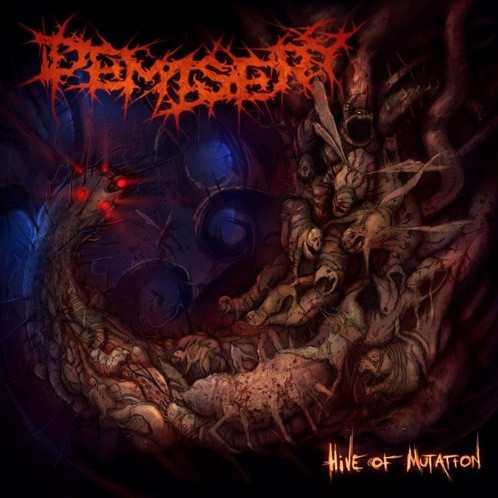 I’ve found the torrent of death metal albums coming out this year to be fairly underwhelming, if that wasn’t already obvious by my lack of reviews for albums in this genre.  Thankfully, reinventors of the wheel like Kartikeya and keepers of the old guard like Vallenfyre have proven to me that death metal can still be as awesome as it was back in the glory days of the 90’s; you just gotta know where to look.

Demisery is definitely one of the bands this year who’ve proven that point. Founded and totally driven by instrumental groove-metal master Keith Merrow and his newly found partner, guitarist/vocalist Gord Olson, Demisery have produced what may very well be my favorite death metal album of the entire year: Hive of Mutation.

It’s old school with the right amount of tastefully inserted modernism. It’s got great riffs out the ass, and the songwriting is compelling and killer.  The fact that the music is the product of only two guys is pretty astounding, with drums, guitars, and bass all being tracked between the two of them, and Gord providing all vocals. (more after the jump . . .)

Demisery’s sound is right up my alley, channeling the styles of some tried and true classic bands.  Imagine a synthesis of Pestilence, Death, Vader, Edge Of Sanity, and Immolation, and you have Hive Of Mutation in a nutshell.  Merrow and Olson fire intense, visceral volleys of riffage from all corners of the death metal spectrum — sludgy doom-soaked grooves; thrashy, sinister shrapnel rounds; cacophonous slams; eerie drones; and tremolo-picked fury. Listening to the album from a guitarist’s point of view, I just fucking love every single riff and solo.

The drums on this album are vicious, tight, and always seem to deliver the right thing at the right time.  There isn’t a single disconnect between riff and beat here; it’s rare to find riffs and drums melded together this well.  The production on this album is also excellent, intentionally carrying a reserved, not-quite-polished, 90’s feel that enhances the authentic aura of the music.  Just listening to this album transports me back to my days of discovering the death metal legends of old.

Every single song on this album is killer, whether it be the crushing and grinding dirge of the title track, or “Vicious Stabbing”, with a lightning-fast assault that sounds like a swarm of demonic hornets flying at you, or the Vader-esque blitzkrieg of “Insurmountable Devastation”.  There’s also a flawless cover of Death’s legendary Human opener, “Flattening of Emotions”.  Gord Olson even goes so far as to change his voice to sound exactly like Chuck’s on that album.  That’s fucking dedication to the metal way if I’ve ever heard it.

This is a 100%, true-to-the-core death metal album that you can tell was a labor of love for both Keith Merrow and Gord Olson.  These two deserve serious respect for what they’ve done — creating an album that holds its own with the legendary bands from whom they’ve drawn influence.  These guys better make more music.

I’ll include a couple songs below, but also be sure to visit MetalSucks (here) for a stream of the entire album. Buy this pronto (which you can do now via this link; it’s available both as a CD and as a digital download). The album is being released today, and should be available on iTunes and Amazon by day’s end.

5 Responses to “DEMISERY: “HIVE OF MUTATION””