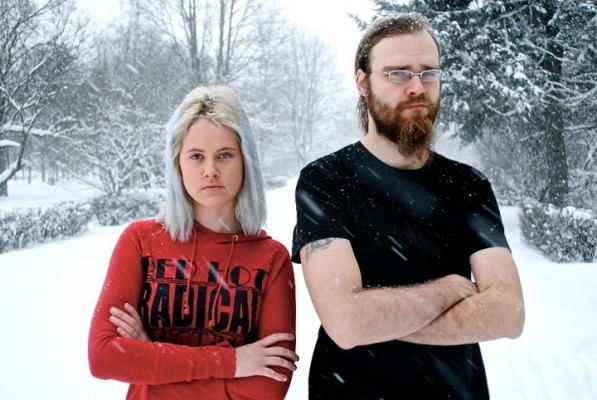 Let’s see now . . . where do we go next? The progression so far today: French old-school gore/death from NecroWretch; abraded female vocalization (and a flood of accompanying commentary) from Landmine Marathon, Wykked Wytch, and Izegrim; teasers from Finland’s Before the Dawn; words from the Demisery duo; and death-rap from Death Grips. Decisions, decisions . . .

I know!  We need some stripped-down bass and drum from Estonia’s Neoandertals! And to be clear, I am NOT talking about that pseudo-rave electronic music that came out of the UK in the early 90s. Blech! No, I’m talking about this:

That’s a track from a Neandertal instrumental album called Australopithecus that’s scheduled for release on February 17 and will be available on Bandcamp HERE. But wait, there’s more! There’s this piece of freaky bass-driven death metal from the band’s 2011 album, Ebu Gogo Gutting the Child:

Ebu Gogo is also available at Bandcamp, and some of the tracks are freely downloadale.

By the way, that pic at the top of the post is Neoandertal as it exists today, with drummer Sandra Vungi alongside bassist Rain Pohlak. A fella named Roland Seer recorded the drums on that Australopithecus album, though if I’ve got my facts straight, Sandra was the slammer on Ebu Gogo.

6 Responses to “ESTONIAN BASS AND DRUM”