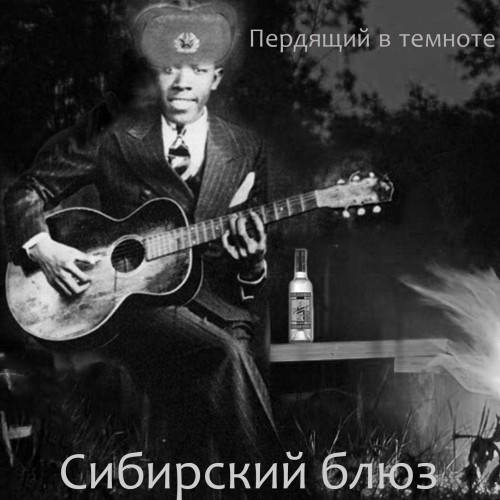 That’s a photo of legendary blues guitarist and singer Robert Johnson (May 8, 1911 – August 16, 1938), except it’s been altered with the addition of the Russian fur hat, the bottle of Stoli vodka on the bench, the forest background, and the flames (?).  It’s the cover of a 2012 album dedicated to Robert Johnson’s memory. The album is called Сибирский Блюз, and it’s by a Russian black metal band named Пердящий в Темноте. You may ask, “What the fuck?” And I will attempt to answer your astute question.

First of all, I’m relying entirely on Google translate for the English version of the band and album names in the title of this post (though the band name could also be “Perdyaschy In the Dark” and “Пердящий” (or “perdyaschy”) could mean “farting”, which would make the band name Farting In the Dark). Perhaps one of our Russian readers can weigh in on the accuracy of this rendering.

I have a little more information about the band and the album, but not much more, despite spending a ridiculous amount of time on internet detective work and Russian translation:

It seems to involve six people, one of whom now seems to be dead. The principal vocalist (the one who seems to be dead) dishes out everything from horrifying cracked-glass howls to falsetto operatics to Tuvan throat-singing. The two guitarists are assigned one stereo channel each on the recording. The drums seem to be programmed. The band seems to have released at least one previous album, with a translated title of In Vain (2010), and perhaps an earlier one called Transcendental Irrefutable Existence (2009).

Siberian Blues includes 12 tracks and runs for almost 1 hour and 20 minutes. It includes a Mayhem cover (“Freezing Moon”, except it’s called “Freezing Sailor Moon”) and other song titles such as “I Despise LaVey – Respect Lavash” and “Sinister Misanthropic Dristalovo Under the Pine Trees On the Mystical Moonlit Snow” (or at least that’s what Google translate tells me). The album may or may not be released by an underground Danish label called Hikikomori Records.

Okay, that’s about it. Now that we’ve got the sketchy facts out of the way, here’s the rest of the answer to that “What the fuck?” question:  The music is obviously created partly in jest, but it’s really an amazing accomplishment. In fact, though it’s an uneven work, it’s one of the most endlessly interesting albums I’ve heard all year — and where it’s strong, it’s very strong.

Stylistically, it’s all over the map, and sometimes off the map altogether. I guess I would call most of it a mix of black ‘n’ roll, blackened thrash, and second-wave melodic black metal — part distorted tremolo waves and part head-wrecking hammer-riffs, part muffled double-bass like the rhythmic whump of helicopter rotors and part rock-the-fuck-out drum patterns.

Sometimes the music is a filthy, crusty, acid-filled spewing of instrumental and vocal invective, but sometimes a memorable (and even majestic) melody will fly out of left field, even on those torrential blasters. And before the album is over, you get some very serious music indeed (more on that in a moment)

On some songs, the buzzing guitar tracks are smeared with a veneer of mud that gives them a rough, distorted quality, though it’s not all lo-fi; the production on many of the songs achieves a harrowing immediacy and clarity. Speaking of lo, the low end is usually downright titanic, with a huge bass tone that occasionally rises up like a leviathan from the deeps.

As for the singing, it may take some getting used to. Most of the time it’s a throaty, mid-range, cracked scream or yell (reminiscent at times of Mayhem’s Attila). Usually, it’s almost more of a chant than “singing”, except when the vocalist breaks into extended shrieking or howling. But that’s only part of the story.

I wasn’t making up the bit about the throat-singing, traditionally practiced by the Tuva people of southern Siberia. It’s in the mix, too, here and there. As best I can recall, I’ve only heard throat-singing in one other metal band — Hungary’s Niburta (read about them in this post at Trollfiend’s Also, Wolves blog). It’s definitely . . . different.

And speaking of different, the vocals on portions of two tracks, including one with the best melodic guitar leads, are in a campy, operatic falsetto. Briefly, they also sound like the whining of a little girl.

Almost half the album’s length is consumed by three songs, which range in duration from almost 11 minutes to more than 16. The longest is an extended black ‘n’ roll jam session guaranteed to give you morning-after whiplash, though it also devolves in a couple of places into freaked-out explosions of arhythmic guitar psychedelia, falsetto wailing, and baby talk.

Another of the long ones is a sludge-filled vat of blackened shoe-gaze with tribal drumming and densely layered vibrating guitars. More risk of whiplash, more utterly depraved occult vocals — and a beautiful, melancholy, folk-influenced melody that’s mesmerizing.

The third long song is a dramatic instrumental in which the layered, varied guitars shine through, accompanied by synthesized strings and a riveting drum track. I can’t think of a better description than orchestral black metal – ambitious in scope, moody and intense in its atmospherics, and enthralling. It sounds like nothing else on the album and began to make me wonder whether there’s anything these deviants couldn’t do if they put their mind to it.

Here are a handful of varied tracks for you to check out. There are two audio players for each song. If one doesn’t work, try the other. If neither works, please leave a Comment (this is my second attempt to make these Russian-encoded mp3 files playable on a range of browsers).

The first one is one of those blackened thrashers:

This next one is a relatively short black-metal torrent spiced up with a trilling Eastern melody:

Finally, this song is the second of those long ones I described above:

If you want to know where I found this album, here’s where:

I’m trying to determine if this really is a forthcoming Hikikomori release. Anything else I learn, I’ll add through an update to this post. Lastly, here’s the band’s line-up, retrieved from that Mediaboom page and deciphered with the obviously suspect assistance of Google Translate. Something tells me these names aren’t the ones their parents gave them at birth.

Alin Veneris – guitar in the left channel, tuporylye solos in both ears at once

Fartillo Psyshaar – guest voice of death with the fifth song 2:36

(Big kudos to TheMadIsraeli for suggesting that I check out this music.)

UPDATE: I just heard back from Hikikomori Records, and they know nothing about this band.