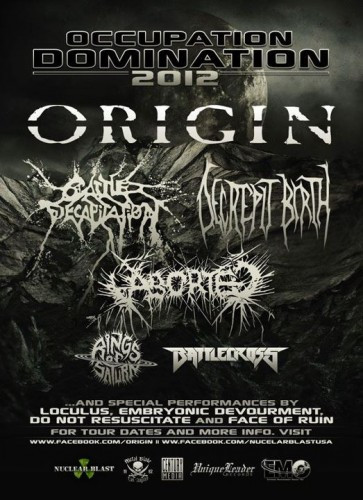 I just saw a Facebook post by Aborted announcing this tour. We just have a few dates and locations so far because an official announcement hasn’t been made, but this line-up is like a ball-peen hammer to the back of the head:

UPDATE:  We now have an official announcement and the entire tour schedule. It begins on April 20 in Baltimore and ends on May 18 in Lawrence, Kansas. Happily for me, it includes a Seattle stop. Check it out after the jump.

15 Responses to “THE OCCUPATION DOMINATION TOUR 2012”