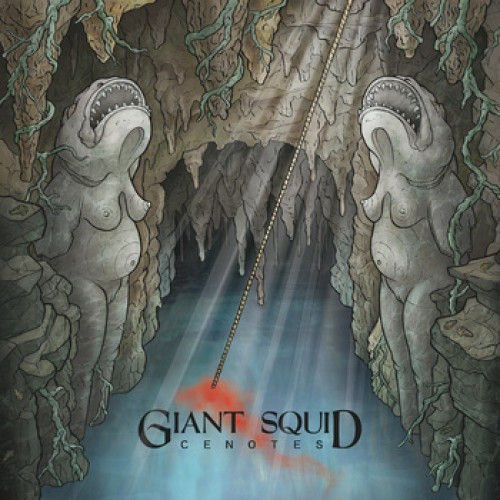 Giant Squid’s music is as strange and rare and phenomenal as their namesake. Their works are subtle and nuanced, a delicate orchestration of oceanic sounds dancing lithely with the guitar’s heavy-handed jig. The band’s ecological philosophy deserts their urban surroundings of hometown Sacramento, California; you’ll be more likely to find them roaming a nature reserve or peering into rock pools by the sea.

It is that natural curiosity that shines through their body of work, most noticeably on 2009’s full length The Ichthyologist, where multiple guests leant their instrumentation to Giant Squid’s complex orchestration. Flutes, banjos, violins, cellos, trumpets, oboes, all additions that were explored to their limits and bent to main songwriter Aaron Gregory’s will. The Ichthyologist got them signed; it was that good.

Now Giant Squid return with the EP Cenotes (suh-noh-tees), a comparatively simpler record, the grandiose composition stripped away and no guests are involved. This is Giant Squid spouting their own black and inky concoctions. 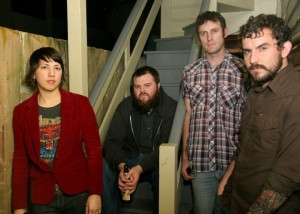 Even though there are fewer classical instruments involved, the cello still handled by permanent member Jackie Gratz, Cenotes still holds the theatrical sensibilities that shone so brilliantly on the full length. However, the change here is that this record is significantly darker than The Ichthyologist; this is Giant Squid’s guitar record.

The lyrical subject matter carries on the story of the protagonist from the full-length record and this forms the bridge between the two releases, although what intrigued me the most was discovering that a ‘cenote’ is a deep natural well or sinkhole, sometimes used by ancient Mayans for sacrificial offerings. Knowing this pulls into focus the comic-esque record artwork depicting a cave-like scene with peculiar piscatorial statues. I think it’s perfect. It captures Giant Squid’s strangeness, and alludes to not knowing the whole picture, establishing an enigmatic lore told in pieces and puzzles. Like good writing, it keeps you wanting to know more.

So, what better subject matter for Giant Squid’s guitar record? The eerie, earthy darkness of a world unexplored, a world beneath a world. One above, made of concrete. One below, carved by nature.

Immediately noticeable is the fleshier tone of the guitar: With fewer instruments to crowd the mix, the guitar sits much higher. They were once the gluteals supporting the other instruments, now they are the biceps pulling the punches. Listening to 2009’s full length, you would occasionally hear the instrumentation become less cramped and the guitar would burst through that space, making crater-like impact. It was so cleverly done and made it all the more effective. 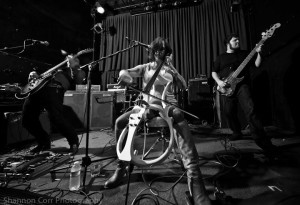 On Cenotes, with its quickened pace and elevated status, the guitar still holds its own and carries all of the composition on its back. But it isn’t as explosive as it once was. What Giant Squid does achieve, though, is refraining from being gratuitous with their song-writing. They aren’t writing riffs for riff’s sake. Giant Squid develop and grow their riffing naturally, allowing it build up to that cataclysmic cave-in or roof collapse. This is best depicted in ‘Tongue Stones’, which produces probably my favourite riff of the year — it arrives at 5:19 in the recording. It has that huge downward force which brings to mind the break-up of ice fields, where skyscraper-sized bulks of ice tumble into the sea, creating icebergs. A Giant Squid’s natural home.

Where I think The Ichthyologist fell down was its cramped production. Similar to many records where there is a complex arrangement, it struggled between clarity and space for each instrument. Thankfully, Cenotes does not suffer this, and the guitar is given plenty of room to breathe, only sharing the melodies with the nomadic cello that provides an off-set point for the riffs. The vocals, too, benefit from the clearer production, each voice with a distinctive sound, trading off each other nicely. One supplies the ethereal majesty, the other delivers a searching anxiety — one of someone who is lost in the dark.