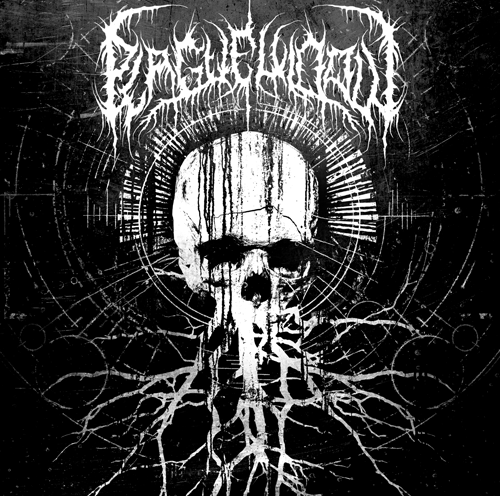 Yesterday we sang the praises of MaxR’s Metal Bandcamp blog as the go-to window into what’s happening in the metal part of Bandcamp’s world. No sooner had we done that than he proved the point again by featuring a three-man Sacramento band called Plague Widow, whose new self-titled EP is now up on Bandcamp.

The band’s name rang a bell that reverberated in my hollow head, and I remembered that DGR (himself a Sacramento denizen) had recommended this band to me  in January. I have a bad habit of forgetting to follow up on music tips if I can’t do it immediately, and that’s what happened with DGR’s tip. But with MaxR’s reminder, I finally dived into Plague Widow’s music.

I’m inclined to presume that any band with the word “plague” in their name is going to be my kind of thing, especially when the cover art is as tasty as that skull-dominant rendering you see at the top of this post. The presumption proved correct.

Despite the fact that the band is very new, having been formed only this past winter by former members of other Sacramento outfits (guitarist Hal Rotter from Slaughterbox and drummer Danny Hynes from Cowboykiller) and vocalist Marc Dickson, Plague Widow have found themselves a winning formula. 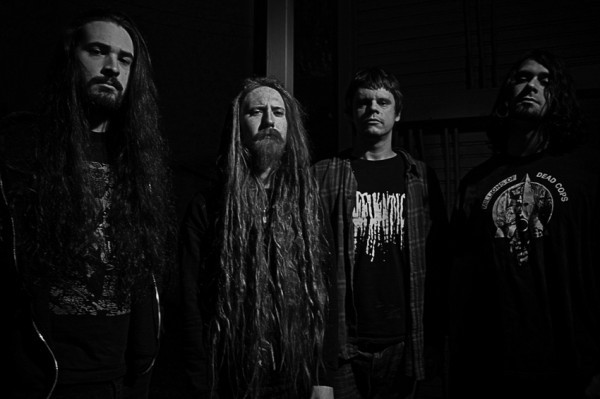 Plague Widow bring searing, soul-rending discordance to your ears — murderous drumming, skull-splitting riffage, monstrously deep vocals (and occasional horrific shrieks), and merciless pacing. The EP is a ferocious, super-heated blast of death-grind with blackened overtones, and it does a brutally effective job of building an atmosphere of impending apocalypse.

To get the full force of the atmosphere, you need to listen from start to finish — which won’t take long, because the songs are short as well as nasty and brutish; the entire EP is about 15 minutes long. Making your way from start to finish will expose you to the ominous, wordless sounds of the intro and the outro and two uber-grim spoken-word interludes (“Abyss I” and “Abyss II”), in addition to the blowtorch fury of the five main songs. While such touches are generally hit-or-miss affairs, they work well on this EP, binding the songs together as parts of a grisly whole.

“Operating the Segmental Apparatus” is somewhat different from the rest of the EP and therefore deserves special mention. While it’s as harrowing as the rest of the tracks, it includes more extensive use of tremolo guitar as well as off-pace passages of morbid melody that together convert it into music that is more blackened death metal (or deathened black metal) than death/grind. It’s a very good song and a change of pace and style that make the EP even more interesting.

Finally, I’ll note that the production on the release is quite good, with well-timed channel-shifting and a sharpness that I thought was fitting for the music.

Here’s the handy Bandcamp player that will allow you to stream the EP, and if you like what you hear (and you damn well should), you can pick it up for $1.99 at the Plague Widow Bandcamp page or order the CD here. Plague Widow merch, including a shirt with that badass EP cover on it, is available here.