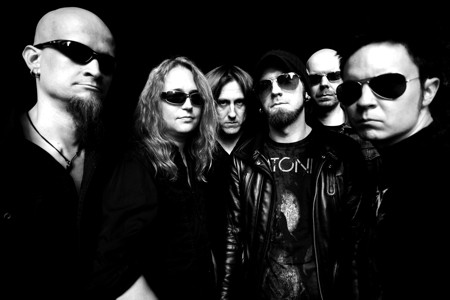 I really liked The Curse of the Red River, the 2010 debut album from Finland’s Barren Earth. I had high expectations for that album because the members of Barren Earth include such Finnish metal veterans as vocalist Mikko Kotamäki (Swallow the Sun), Olli-Pekka Laine on bass (Ex-Amorphis, Mannhai), drummer Marko Tarvonen (Moonsorrow) , and Kreator guitarist Sami Ylisirniö.

With such a strong debut, I’ve had even higher expectation for the band’s second album, The Devil’s Resolve, which is scheduled for release on March 13 in North America (via Peaceville Records). It was mixed by Dan Swanö, it features cover art by Paul Romano, and it includes guest appearances by Mathias Lillmåns (Finntroll) and Jaakko Lemmetty (Korpiklaani). Based on an initial listen to The Devil’s Resolve, I’d say my expectations have been satisfied once again.

In an earlier post, we told you about a chance to download a song from the album called “The Rain Begins”, and as of today the band have now released an official video for the song. The song itself is immensely memorable, with a dramatic, piercing melody delivered by keyboard and guitar that easily takes up residence in your mind. It’s a melodic blend of doom and death marked by Kotamäki’s contrasting clean and harsh vocals.

But the video is almost as fun to watch as the music is to hear. Rather than try to explain why, I’ll just let you see it for yourselves . . . after the jump. (And unlike the song from Spawn of Possession featured in our last post, the lyrics to this song matter, and they’re wonderful.)

You can get more info about the album and how to acquire it by visiting the mini-site established by Peaceville here.