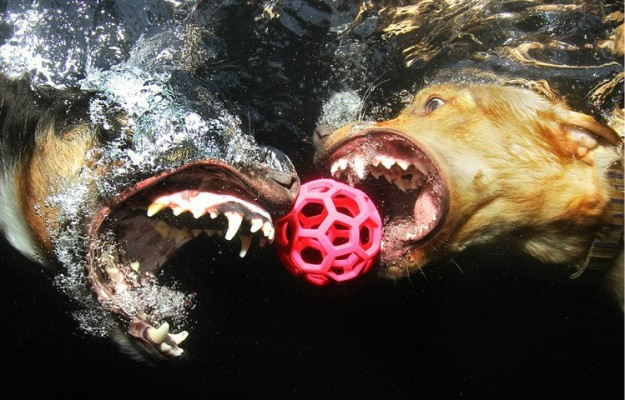 I think this is the first installment of this series in which I didn’t lift a finger to find any of the items myself. Every one of them came my way either through an e-mail suggestion from one of our readers or via a post on FB by one of my friends. Having other people do your work for you is definitely the way to go. It allows you to spend more time not working.

For new readers, the focus of this series is not music, but photos, videos, and news items that we think are metal. However, in this installment, I’m cheating at the end: The last items does involve music, but it’s not really the music that makes it metal. It’s the spark of creativity. You’ll see.

The first item is the photo you see at the top of this post. I saw it through a FB post by JZ. It turns out that it’s one of many created by a photographer named Seth Casteel in a series called “Underwater Dogs”. He seems to spend much of his time photographing pets for people who can afford to have pet portraits made, which seems kind of ridiculous, but then again all sorts of things undoubtedly seem less ridiculous when you have the money to do them without sacrificing something else important like food or beer. But this “Underwater Dog” series is not ridiculous. It’s metal.

In addition to the fact that the quality of the underwater photos is amazing, they capture man’s best friend looking either really scary or really alien or both. Go here to see the whole series, and check out one more right after the jump. 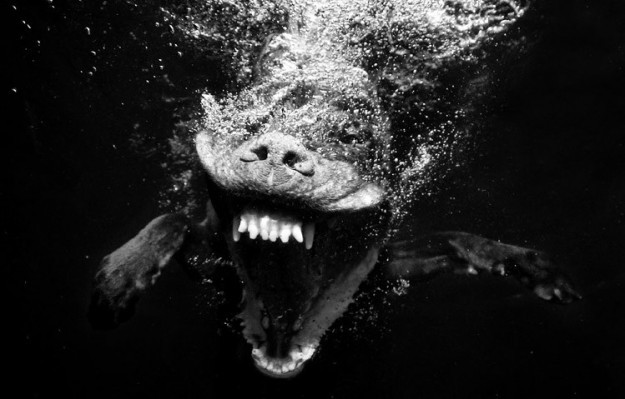 Speaking of scary and weird, those of you who’ve been crawling around NCS for a while know that I have a propensity for including frightening and disgusting creatures from the natural world in this series, and I’m not talking about underwater doggies. I’m talking about shit like this, which came my way via an e-mail from a reader who calls himself Nova:

This is just one more example of how lucky we are (a) that monsters like crabs who can self-amputate and regenerate claws evolved as small creatures, and (b) human beings didn’t. If our size were on the same scale as crabs, we’d be in some deep shit.

We don’t always just fill up these THAT’S METAL! posts with weird and disgusting items, despite the fact that nothing says “metal” like “weird and disgusting”. Some things are metal because they’re just flat-out amazing. That’s what this next video is. This is the first of three items that involve human flight — and I’m not talking about people in airplanes.

This was shot during a high-altitude sky-dive above Melbourne, Australia in February 2011 using a GoPro camera. It includes five-time world champions Fred Fugen and Vince Reffett from an extreme sports outfit called Soul Flyers. Fucking amazing, as well as breath-takingly scary to watch (at least for me). Also, definitely metal.

Staying with this theme of human flight, the following video captures Swiss pilot Yves Rossy flying in formation alongside two Albatross jets over the Swiss Alps. Except Yves is not in one of the jets. He’s wearing a custom-built jet suit that can travel at speeds in excess of 125mph. I’m assuming the jets are throttled way back, but this is still pretty fucken cool.

One more “human flight” video. So, in this one there aren’t really people flying, just the illusion of that — though the day may come when it will become just this easy for real human beings. What the video shows is three human-shaped RC planes being flown around New York City. As one of the YouTube commenters said, I wonder how many people on the ground shit their pants that day?

Keith Loutit is a photographer and filmmaker based in Sydney, Australia. He pioneered a method of filmmaking called the “tilt-shift/time-lapse” technique. It’s a way of using time and focus to create an illusion of miniaturization using images of real-world, life-size scenes. In Loutit’s words, his aim is create a sense of wonder in our surroundings by “challenging people’s perceptions of scale, and helping the viewer to distance themselves from places they know well”.

His latest project is to document the world’s great cities, landscapes, and monuments of the ancient world “in miniature”. This video was filmed during the annual Carnaval festival in Rio de Janeiro, Brazil, during 2011. This is way beyond cool, and it gets more and more amazing as it goes on. (Thanks to JZ again for posting this on FB.)

And for our last item, I’m cheating because this video is all about people playing music. But it’s not the music that’s metal. It’s the stagecraft.

Okay, let me modify that: the song is “Iron Man” by Black Sabbath, so the music is metal. But that’s still not why I’m including the video here. I’m including it because this band (ArcAttack) uses a Tesla Coil to fire up the festivities, with the guitar player using an iron guitar in a Faraday cage.