(BadWolf reviews the new album on the Southern Lord label by Seattle’s own Black Breath.)

One look at that album cover should let you know that this music is going to kick your ass—it functions as a statement of purpose. It’s striking, minimal, and to the point—unlike the muddled cult paraphernalia on the cover of 2010’s Heavy Breathing. It evokes metal classics like Judas Priests’ British Steel, Metallica’s Kill ‘Em All, and The Scorpions’ Virgin Killer; even though Black Breath sounds nothing like those bands, they still bring adolescent fury in a way that feels fun, like those bands, while still sounding modern.

Why am I talking about the art? Everyone knows you can’t judge a book by its cover.

Because you used to be able to buy an album based on its art and know you were in for your money’s worth of audio pummeling—that’s true here.  Black Breath evaded the sophomore slump and delivered one burst of white-hot intensity with Sentenced to Life.

Its predecessor, Heavy Breathing, would have been near the top of my favorite albums of 2010 list had I heard it before January 2011. I would rank it alongside Trap Them’s Darker Handcraft and Masakari’s The Prophet Feeds as the finest examples of my favorite current trend, the Crust-Punk-Meets-Old-School-Death music that has come to define post-2010 Southern Lord records (see also: Heartless, All Pigs Must Die, each fucking great). While I give Darker Handcraft a slight edge, Heavy Breathing has an ace up its sleeve: the song “I Am Beyond,” possibly the best mosh riff I have ever heard. 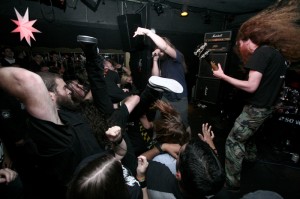 Most of their peers focus on social issues and poverty as sources of anger, but Black Breath take a more Misfits-meets-Black-Metal approach, with lyrics centered on satanic rituals, the merits of suicide (“Life is a prison/ Death is the key,” goes “Home of the Grave”) and other horror movie tropes like consuming human flesh. There’s also a heavy dose of black humor in their music—notice the double-entendre in the title there? They balance less seriousness compared to their peers with more consistent songwriting overall, and valuing riffs over feedback. I tend to put them on more playlists with Goatwhore and Skeletonwitch than with their peers.

Perhaps that’s why Black Breath errs closer to metal on this release. On Sentenced to Life, Black Breath shed most of the slow groove-oriented fat (minus halfway-point breather “Endless Corpse”) in favor of greater velocity. There are no instrumental tracks like “Heavy Breathing,” or weird re-interpretations of blues standards like “Unholy Virgin.” This record is the sensation of being thrown into a mosh pit distilled into 30 minutes of D-beats, gang-shouts and buzzsaw guitars.

The first-premiered track, “Mother Abyss,” flies like a bullet, but it’s the tip of the iceberg. “Forced into Posession” and “Doomed” blaze past so quickly they verge on powerviolence tracks. Meanwhile “Home of the Grave,” opener “Feast of the Damned,” and the title track merge Slaughter of the Soul-era At The Gates riffs with Discharge attitude and a nearly pop-punk knack for scream-along choruses. My favorite track? Three-minute skankfest “Of Flesh,” where Black Breath keep making you wonder (mid-swing) ‘is he talking about cannibalism, or sucking his cock?’ 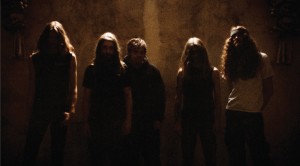 I do not see a future where Sentenced to Life doesn’t make my end of year top list. Short, propulsive and full of swagger, it’s going to be in heavy rotation while I work out and also while I party. Here’s hoping they actually play near me this year.

EDITOR’S NOTE:  Black Breath recorded the album at God City Studios with Kurt Ballou, and had the finished product mastered by Alan Douches at West West Side.  The Southern Lord release dated for Sentenced To Life is March 27, and they’re taking pre-orders for the album here.

Your humble editor wishes to note that he has seen Black Breath play in the flesh, and that you will need one of these on the morning after, if you’re lucky enough to catch a show.

Here are band links, and below that is Black Breath’s current European tour schedule, along with other bands scheduled to play alongside them. I should also mention that they’re playing in my original hometown of Austin, Tx, on March 16, headlining the Southern Lord Power of the Riff showcase at the Scoot Inn during the SXSW festival.