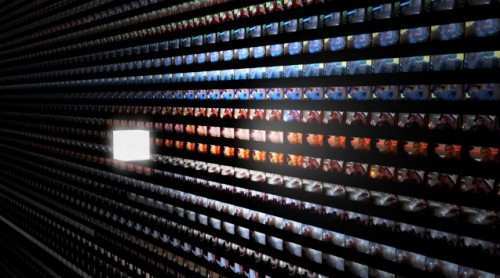 Blade Runner is not a perfect movie. Among its flaws, Harrison Ford, playing the lead role of Deckard, was the weakest link in a cadre of actors who were otherwise everything you could have wanted. But it’s a movie that makes a deep impression, or at least it does if you’re at the right age, at the right time of your life when you see it. At the right time, it seems profound.

How long do we have? We don’t know. No one knows. It’s a shame we won’t live . . . but who does? A blade runner, a hunter of rogue replicants, of skinjobs, realizes too late that life is precious, even artificial life. He realizes, as we all will eventually, the ultimate tragedy in the loss of a lifetime of unique experiences as all those moments pass away and doves fly off in the rain. Maybe he realizes that he, too, is a replicant. But does it really matter? They’re only accelerated versions of us, their energy draining away to the vanishing point before they’re ready. And who is ever ready?

A video artist named Francois Vautier extracted 167,819 frames from Blade Runner‘s final-cut version and assembled them into a gigantic virtual wall of images — a square of approximately 60,000 pixels on one side alone. He then created a virtual camera as a roving observer of the mosaic, passing over the frames in a compressed version of the movie itself. If you’re a Blade Runner worshipper, as I am, it’s a cool thing to see.

Unsurprisingly, the longest segment of dialogue in this homage to Ridley Scott’s creation is the sequence of words spoken by the combat replicant Roy Batty as he dies, having just saved his hunter to live for . . . however long Deckard may have left to live. So, in addition to embedding this interesting Vautier video, here also is that scene from the movie:

“I don’t know why he saved my life. Maybe in those last moments he loved life more than he ever had before. Not just his life – anybody’s life; my life. All he’d wanted were the same answers the rest of us want. Where did I come from? Where am I going? How long have I got? All I could do was sit there and watch him die.”