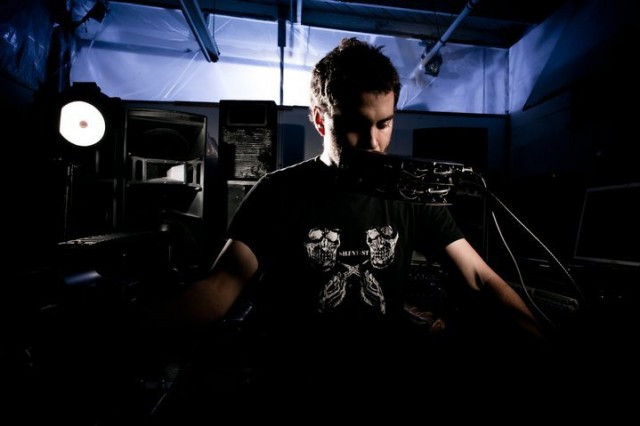 (BadWolf introduces us to Author and Punisher. Unlike most metal musicians, he engineers and builds his own instrumental devices. Prepare for massive nerdgasm.)

How would you like to be crushed by an army of giant robots? I’m afraid technology isn’t quite there yet, but the closest you could come is to jam on Author and Punisher.

Author and Punisher is the Industrial solo project of one Tristan Shone, and what an apt title it is. This is music that definitely follows a single creative vision (Author) and punishment is what he doles out. Shone’s new album, Ursus Americanus, will be released on April 24th through Seventh Rule records, the home of such sludgy marauders as: Indian, Harpoon, Lord Mantis, and the mighty Batillus.

Author and Punisher pulls influences from the more drone/groove oriented Industrial of Godflesh, as opposed to the thrashier (and poppier) Ministry school. Paradoxically, I find Author and Punisher heavier than those bands, but Tristan Shone does not use a guitar—and that’s precisely what is so metal about him.

He creates his own unique instruments—that resemble a Gundam cockpit. Check it out.

I had to watch that twice. That rail machine looks like something out of classic Sci Fi. The segment of the video where he says he picked the knobs because he wanted a more tactile interface stuck with me as well. Shone uses some other instruments—Dub Machines, he calls them—not shown in the video and each is more fascinating than the last. Look on his blog [http://www.tristanshone.com/] for a huge rotating encoder wheel, and a camera-like pushing device called The Bellows. The instruments he has planned but not yet manufactured—especially a terrifying new vocal mask—look even more fascinating.

Every Dub Machine carries a certain workmanlike charm; Shone wants to spend effort while crafting sound. The music matches him—in a way it disembodies and encodes his actions, which are also encoded and decoded by his interfaces and Arduino Micro-controllers. The songs on Ursus Americanus roll over the listener with heft and weight sorely lacking in most modern Industrial music. Dance music this is not—maybe Trey Azagthoth should have gotten Shone to remix Illud Divinum Insanus.

But do the songs match the sound? Happily yes. I wager Tristan Shone could make a decent living off science fiction and horror film composing if he weren’t an employee at the National Center for Microscopy. Ursus Americanus feels long, but the style of music is at fault more than the songwriting. Industrial tires the ears—this is known. I forgive that audio fatigue when I hear the near-beatboxing vocals on “Terrorbirds,” the quiet and unsettling textures in “Mercy Dub,” and every bit of the song “Flesh Ants.” During my second run-through, I closed my eyes and imagined technological carnage unfolding against the movie screen that is the inside of my eyelids.

I can’t stream all these onslaughts for you yet, but fortunately Seventh Rule streams albums on Bandcamp—expect a link to Ursus Americanus in April. Until then, enjoy the Dub Machines at work in this live video of “Terrorbirds”, and below that listen to “Flesh Ants”, which premiered Friday on American Aftermath.

And if that wasn’t enough, how about his first three albums? Each sell for $5 or less, and stream for free. Gotta love BandCamp.

3 Responses to “AUTHOR AND PUNISHER”