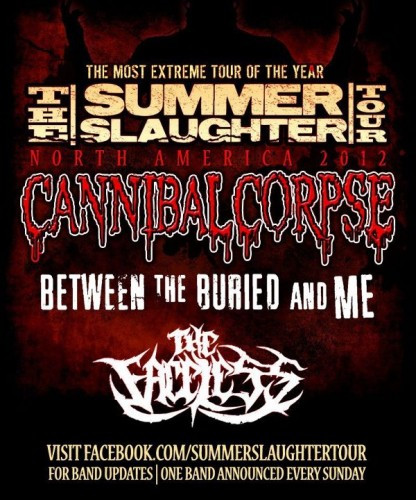 This year’s edition of the North American SUMMER SLAUGHTER tour is shaping up to be a must-see event. All you really have to do is look at the name of the band at the top of the bill. When the tour organizers began announcing the line-up they decided to build enthusiasm and anticipation by rolling out the names of the starring bands one at a time, beginning with Cannibal Corpse. The idea was to unveil a new band’s name every Sunday until the line-up was complete. After the initial announcement, I decided to wait until the entire line-up had become public before writing about the tour again.

Well, the plan hasn’t unfolded quite as envisioned. After the announcements of Between the Buried and Me, The Faceless, Exhumed, Goatwhore, and Veil of Maya, there have been a few hiccups — like the kind you get that go on for an hour and leave you begging strangers to scare you. There was no announcement a week ago, and despite promises by the promoters that they’d catch up by giving us two new confirmed names yesterday, that didn’t happen. Instead, we got a promise that it would happen later this week. Who knows why?

To make up for the miss that happened a week ago, the organizers said they would also announce yesterday the candidates for fan voting for the opening act on the tour. You may remember that they did this in 2011, too — rolling out a list of 10 band candidates and allowing fans to vote for a winner. Eventually, the promoters took most of the bands who failed to win and packaged them in a separate SLAUGHTER SURVIVORS tour. Welp, the announcement of the 2012 candidates didn’t happen yesterday either. Instead, we got this cryptic explanation:

“As for the voting contest. FALLUJAH, CEREBRAL BORE and AEGAEON will all be contenders for the opening spot. Who else should be included? We are actually considering letting you guys vote for the 1st and 2nd spots on the tour! All the other 8 bands are confirmed.”

So, it appears that the organizers haven’t figured out who the other 7 candidates will be for the opening slot. Because if they had, we’d know the names, right? But what does it mean to say “the other 8 bands are confirmed”? I guess that’s referring to the other bands who will appear after the to-be-selected opening act, but, but if they’re confirmed, why the delays in the roll-out?

The only additional tidbit of news I saw this morning was a status on the SUMMER SLAUGHTER Facebook page saying they had tried to get Spawn of Possession for the tour but failed, because Spawn can’t come to the U.S. this summer. Too fucking bad. Seriously.

MetalSucks helped propagate a rumor that Job For A Cowboy and Hate Eternal would appear, but I haven’t seen official confirmation yet. Those would be two strong additions to the bill.

Oh well, I suppose I should have stuck to my original resolution and just ignored all this until everything was final and official and done. But, all grousing aside, this is still a must-see event, even if they don’t announce a single additional band. And those three candidates who’ve been announced so far for the fan voting are excellent choices, in our humble opinion.

I may or may not write about this tour again before the final line-up becomes public. Probably will. Sticking to resolutions isn’t my strong suit.

Meanwhile, if you know anyone involved in organizing the tour, try to scare them.