No, that’s not the cover to Gorod’s new album. It’s part of the artwork for a forthcoming 7″ by New Zealand’s Heresiarch. We’ve posted the Gorod cover many times already, and I thought the Heresiarch art was so sick that it should be shared.

Okay, that didn’t make a lot of sense, did it? Gorod and Heresiarch have nothing in common except they’re both metal. But my brain is kinda scrambled at the moment because I just listened to a new Gorod song. It’s called “Carved In the Wind” and it features a jazzy guitar solo by Christian Muenzner (Obscura). I presume the song will eventually begin streaming on YouTube or some other more frequently visited location, but for now it’s in a tiny player that you’ll have to squint to find at Vs-webzine (HERE). Look for the cover art for Violent Absolution and you’ll see the player to the left of it.

I haven’t yet listened to the Gorod album, but I have it on good authority from a respected blogger friend (who has heard the album) that it may be the tech-death album of the year. Those are strong words, given that 2012 has produced Incurso by Spawn of Possession., in addition to a new one from Psycroptic and one to come from Cryptopsy. I may have to shove aside other albums I’m supposed to be spinning and jump right to the Gorod. Actually, there’s no maybe about it.

“Carved In the Wind” is delicious. I love the swirling guitar lead and the pulsing keyboard tones. I love the funky bass line. I love that jazzy guitar solo. I love that Gorod have pulled together in a single song so many different stylistic elements in a way that seems natural and have produced music that’s not only head-twisting but also melodic, memorable, and a headbanger to boot. Go check it out and then come back here and write something that makes no sense in the Comments.

Speaking of making no sense, there’s more Heresiarch artwork after the jump, from their last EP, Hammer of Intransigence, plus a live Heresiarch song clip. 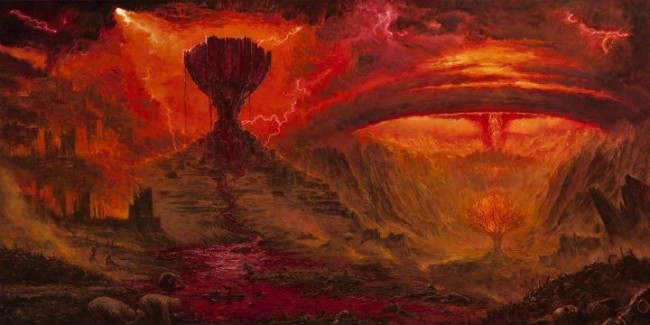 20 Responses to “ANOTHER NEW GOROD SONG: “CARVED IN THE WIND””