The split reveals both bands at the height of their powers, and displays what makes their particular forms of assault on the senses different from each other. Moreover, the split has been used as a vehicle for both bands to engage in experimentation, coupling forms of nightmarish ambient music to their more unhinged and apocalyptic sonic attacks. Today we make public the split in its entirety, preceded by a slightly revised version of a review we published weeks ago. END_OF_DOCUMENT_TOKEN_TO_BE_REPLACED

The split I just mentioned is entitled Defleshing the Serpent Infinity. It will be released by Iron Bonehead Productions on July 31st. New Zealand’s Heresiarch contributes three tracks to the split, and Canada’s Antediluvian joins in with two. END_OF_DOCUMENT_TOKEN_TO_BE_REPLACED

This new track appears on a punishing new split set for release by Cyclopean Eye Productions on July 26th. On this split, Scorn Coalescence, Serpent Adrift are joined by three other ferocious trans-continental groups, all of whom specially recorded the songs for this split — Genocide Shrines (also from Sri Lanka) and the New Zealand bands Trepanation and Heresiarch. END_OF_DOCUMENT_TOKEN_TO_BE_REPLACED

(New Zealand-based writer Craig Hayes (Six Noises) returns to NCS with this review of the new album by his countrymen in Heresiarch, which will be released on July 7 by Dark Descent.)

So here it is, Death Ordinance, the long-awaited full-length debut from New Zealand black/death wrecking machine Heresiarch. It’s no exaggeration to say that Death Ordinance is one of the most anticipated releases in the annals of Antipodean metal, and fans of belligerent and bestial metal the world over have been counting the days until the album’s release. That’s because Heresiarch deliver a singularly brute force audio onslaught –– aka everything you want in an obliterating war metal juggernaut.

Heresiarch are militant, violent, and ruthless; and hell, there’s even a whiff of spurious controversy about them too. All of that’s fuelled the band’s defiant mythos, which Heresiarch reinforce by delivering some of the most remorseless underground metal around. END_OF_DOCUMENT_TOKEN_TO_BE_REPLACED

Despite its stunning physical beauty, New Zealand has long been an ominous fortress of black/death supremacy, and Heresiarch have defiantly stood on the battlements ever since the release of their Hammer of Intransigence EP in 2011, with their looming presence growing even more formidable after the release of 2014’s Wælwulf. Given the strength of those EPs, we have been eagerly awaiting their debut album, Death Ordinance, which will be released by Dark Descent Records on July 7th — and now we finally have music from the album to share with you.

The song we’re premiering today is “Storming Upon Knaves“. It’s the second track in the running order of Death Ordinance. It follows the opener “Consecrating Fire”, which is a slow, stunningly bleak decree of doom that evolves into a militaristic march. You get the sense near the end of “Consecrating Fire” that things are ramping up… and sure enough, all hell breaks loose when “Storming Upon Knaves” begins. END_OF_DOCUMENT_TOKEN_TO_BE_REPLACED

The first piece of attention-grabbing artwork I’ve collected here (above) was created by the Chilean artist Nekronikon for the new album by Italy’s Antropofagus. Entitled M.O.R.T.E. – Methods Of Resurrection Through Evisceration, it will be released May 12 on CD via Comatose Music and on vinyl via Everlasting Spew Records. END_OF_DOCUMENT_TOKEN_TO_BE_REPLACED

For your audio-visual enjoyment, here are two brand new songs I just heard. I did not group them together randomly. I grouped them together because they make a one-two punch of merciless destruction.

Heresiarch are a New Zealand band whose last EP, Hammer of Intransigence, I reviewed here. “In the main,” I wrote, “Heresiarch’s EP is designed to provide unmitigated sonic violence, a thorough immersion in warlike atmospheres, and in that it succeeds in striking fashion…. If I’d only known, I’d have stocked up on some radiation sickness medicine before listening.”

I was stoked to learn this morning that Iron Bonehead Productions will be releasing a new Heresiarch 7″ EP named Wælwulf this coming March (the killing cover art is above), and that one of the three new tracks is now streaming on Bandcamp. “Endepræst” is the name of the song and it’s about 6 minutes of militaristic black/death, beginning as a march and moving into a frontal charge, with cannons blasting and the air filled with tremolo’d shrapnel and the howls of ravening wolves. The song devolves into a gruesome golem stomp of massive proportions, the guitars continuing to buzz like wasps, the vocalist continuing to roar and howl like something inhuman. END_OF_DOCUMENT_TOKEN_TO_BE_REPLACED 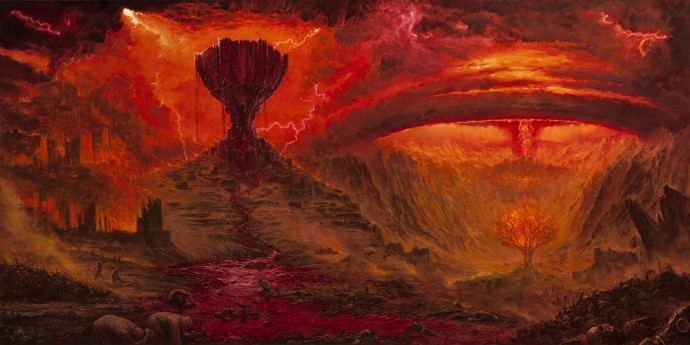 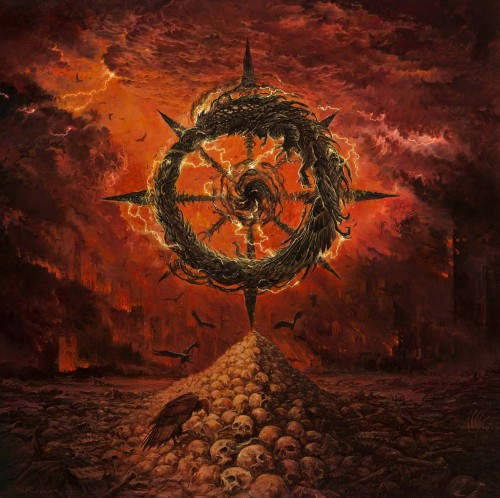 Now that I have your attention, let’s talk about Hammer of Intransigence — though I’ll be coming back to Nick Keller shortly. END_OF_DOCUMENT_TOKEN_TO_BE_REPLACED

No, that’s not the cover to Gorod’s new album. It’s part of the artwork for a forthcoming 7″ by New Zealand’s Heresiarch. We’ve posted the Gorod cover many times already, and I thought the Heresiarch art was so sick that it should be shared.

Okay, that didn’t make a lot of sense, did it? Gorod and Heresiarch have nothing in common except they’re both metal. But my brain is kinda scrambled at the moment because I just listened to a new Gorod song. It’s called “Carved In the Wind” and it features a jazzy guitar solo by Christian Muenzner (Obscura). I presume the song will eventually begin streaming on YouTube or some other more frequently visited location, but for now it’s in a tiny player that you’ll have to squint to find at Vs-webzine (HERE). Look for the cover art for Violent Absolution and you’ll see the player to the left of it.

I haven’t yet listened to the Gorod album, but I have it on good authority from a respected blogger friend (who has heard the album) that it may be the tech-death album of the year. Those are strong words, given that 2012 has produced Incurso by Spawn of Possession., in addition to a new one from Psycroptic and one to come from Cryptopsy. I may have to shove aside other albums I’m supposed to be spinning and jump right to the Gorod. Actually, there’s no maybe about it.

“Carved In the Wind” is delicious. I love the swirling guitar lead and the pulsing keyboard tones. I love the funky bass line. I love that jazzy guitar solo. I love that Gorod have pulled together in a single song so many different stylistic elements in a way that seems natural and have produced music that’s not only head-twisting but also melodic, memorable, and a headbanger to boot. Go check it out and then come back here and write something that makes no sense in the Comments.

Speaking of making no sense, there’s more Heresiarch artwork after the jump, from their last EP, Hammer of Intransigence, plus a live Heresiarch song clip. END_OF_DOCUMENT_TOKEN_TO_BE_REPLACED