This new track appears on a punishing new split set for release by Cyclopean Eye Productions on July 26th. On this split, Scorn Coalescence, Serpent Adrift are joined by three other ferocious trans-continental groups, all of whom specially recorded the songs for this split — Genocide Shrines (also from Sri Lanka) and the New Zealand bands Trepanation and Heresiarch. 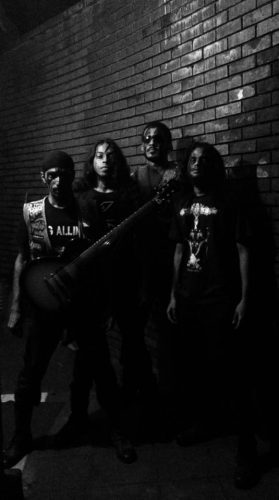 Rage drives “Poisoning the Seven“, and it also proves to be a catharsis for rage. Viciously seething guitars interspersed with brutally booming drums lead into a swarm of roiling chords and scorching vocal tirades — and then the drummer begins to batter in a fury, with the hyperactive bass moving just as fast, and the riffing swirls into a high flame, broiling the senses. The vocalist also throws himself into new heights of frenzy and wild fury, tearing his throat with delirious howls, livid cries, and wretched gagging sounds. This onslaught of savagery is segmented by bursts of blaring melody and jolting percussion, by a slower, dismal interlude, and by cruel, militaristic marches.

The music is imperious and violent, defiant and delirious, a summoning of chaos — but one that nevertheless provides the kind of jolting grooves that will keep heads moving during the melee.

In addition to these impressions of the sounds, we include the following statement from Serpents Athirst:

“The noble thought of eliminating a reigning parasite is an essence of the reptilian brain. Polished with agony with the will to kill, ‘Poisoning the Seven‘ is a concrete decimation anthem eyeing the death of those who are The Pious and The Righteous, The Political and The Correct, The Blinded and the Brainwashed, The Squared and The Circular, The Vague and The Vogue and creating a universe of orchestrated terror by poisoning the Undying transcontinental ray of human lunacy.

“‘Scorn Coalescence contains the latest offering by the vile serpent among three other grand decimators of the extreme metal dimension. Carefully Selected and Well Organized, the Coalescent artillery is gunned by the 4 masters of unforgiving colossal decimation brought together by obscure ordinance.

“~The Ordinance of Strike is an endowment.”

Scorn Coalescence will be released on CD and features cover art by Roger Moore (Trepanation). Along with today’s premiere (and a pre-order link) we’re also including streams of the tracks by Genocide Shrines (which premiered at CVLT Nation) and Heresiarch (which premiered at DECIBEL).