The split reveals both bands at the height of their powers, and displays what makes their particular forms of assault on the senses different from each other. Moreover, the split has been used as a vehicle for both bands to engage in experimentation, coupling forms of nightmarish ambient music to their more unhinged and apocalyptic sonic attacks. Today we make public the split in its entirety, preceded by a slightly revised version of a review we published weeks ago.

You could think of the first two Heresiarch tracks as a trip through a mind-bending, ultra-violent vortex, and the third one as the horrifying void that awaits on the other side.

“Lupine Epoch“, the track that begins the split, is Heresiarch-ian warfare as we’ve come to expect it, a savage assault of percussive mortar fire, thickly distorted guitar obliteration, and roaring vocal cruelty, infiltrated by squalling leads and shrill, quivering arpeggios that add to the feeling of blood-lusting derangement. The music pounds, shrieks, and maniacally veers among a panoply of electrifying riffs. It’s barely more than two minutes long, but it’s a furious war-zone nonetheless, the sound of massed military weaponry overheating in their discharge and the madness of slaughtering combatants.

The second track, “Excarnation“, is twice as long and therefore twice as destructive. The percussive jolts are spine-shaking, the hammering snare is skull-splitting, the riffing is a dense, roiling morass of toxic noise that also flares and blares, and the vocals are simultaneously insane and mercilessly dominating. Accented by bursts of machine-gun drumwork and head-moving, heavy-caliber thunder, and driven into the red zone by fast-moving fretwork, the music builds toward a searing crescendo of blast-beats and soaring leads that sound like wretched desperation.

To conclude their portion of the split, Heresiarch have crafted a five-and-a-half minute experimental piece entitled “No Sanctuary“. It’s an ominous and chilling composition in which horn-like tones slowly moan over distant windy sounds and deep reverberations. Violent percussive detonations, hammering timpani, and gargantuan roaring intrude upon that ghastly reverie, creating a mood of fear within a shroud of doom. It ends with something like the wail of a far-away siren, coupled with the horrifying voice of the Beast. 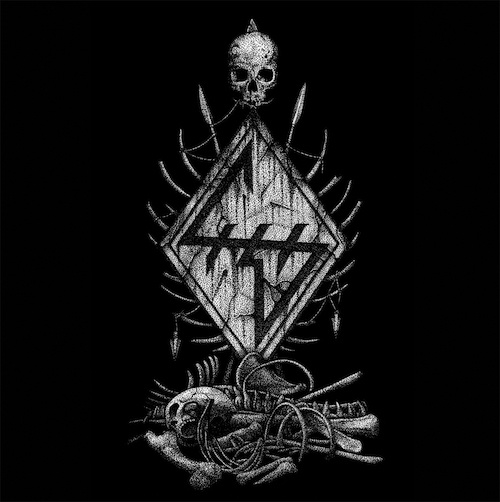 While Antediluvian are as adept as Heresiarch at unleashing shockingly violent assaults, their use of discordance and dissonance creates a more esoteric feeling. If Heresiarch is the sound of militarized human self-destruction and madness, Antediluvian seem to channel unnerving chaos from a different plane of existence, like the malignant intrusion of ancient and alien forces into the defenseless world we know, or perhaps our own shuddering glimpse into that nightmarish dimension.

“Slipstream of Leviathan’s Wake” wastes no time teleporting the listener into an unearthly cyclone of yowling, pulsating, jabbing guitar (heavily distorted of course), pummeling drums, and grotesque, cavernous growls. Boiling leads surface in a semblance of lunacy, but the pace also drops, and a collage of weird and warped sensations swirl around rhythmic bass tones and carry the music into a hellish dimension.

The sounds become increasingly hallucinatory and unnerving. Echoing voices seem to carry on a preternatural dialogue. Drum bursts erupt and morph into strange patterns. Skittering strings and mutated chords add to the feeling of inhuman horror. And thus Antediluvian’s version of black/death, while evidencing kinship with Heresiarch’s, is less a sonic warzone than it is a blood-freezing other-world.

Like Heresiarch, Antediluvian also created an experimental ambient track for the split, a six-minute piece entitled “Prelude” (though it’s the final track on this release). Weird warbling sounds and a deep hum provide the backdrop for abrasive gun-shot cracks, the mangling of sheet metal, discordant piano reverberations, and other unidentifiable noises, all of which together create an unsettling sensation, just as paranormal in its own way as “Slipstream of Leviathan’s Wake” is.

Iron Bonehead will release the split on 12″ vinyl and CD. Check out the following locations for info on how to get it as the release date draws nearer.

2 Responses to “AN NCS SPLIT PREMIERE: HERESIARCH AND ANTEDILUVIAN — “DEFLESHING THE SERPENT INFINITY””