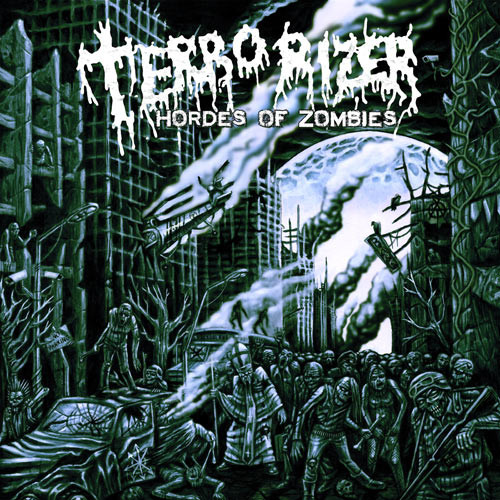 To be brutally honest, I’m not my usual cheery self today. My fucking day job continues to interfere severely with the vastly more important job of entertaining the vast numbers of people (vast, I tell you) who count on NCS each day to give them a reason for living. But my spirits improved dramatically (albeit briefly) when I saw the new video from Terrorizer for the title track of their new album, Hordes of Zombies.

The band’s 1989 debut, World Downfall, is credited by lots of folks as being a landmark in the development of grindcore, but the band folded not long after, with its members going on to join little known acts such as Morbid Angel, Napalm Death, and Nausea.

There was a brief reunion of sorts, with Jesse Pintado and Pete Sandoval from the original band recruiting vocalist Anthony Rezhawk (Resistant Culture) and Tony Norman (Morbid Angel) to add guitars and bass, producing the 2006 album Darker Days Ahead. In the week following its release, Pintado died of complications from liver failure.

Now, Terrorizer has risen again, with David Vincent (Morbid Angel) on bass and guitarist Katina Culture (Resistant Cuture) filling out the line-up. So far, I’ve only heard the title track, courtesy of this new video, but I . . . fucking  . . . love it! 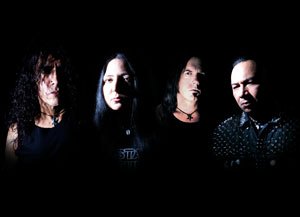 The song fells large trees, destroys neighborhoods, nukes entire cities, and spawns legions of zombie metalheads. You can see all of that in the video. Apart from its destructive and mutating consequence, the song is a headbanger’s delight. It just rampages ahead like a death-grind locomotive, with a catchy-as-fuck tremolo lead surfacing throughout.

Check it out — and give thanks to Metal Injection for premiering this clip.

Hordes of Zombies is out now on the Season of Mist label.