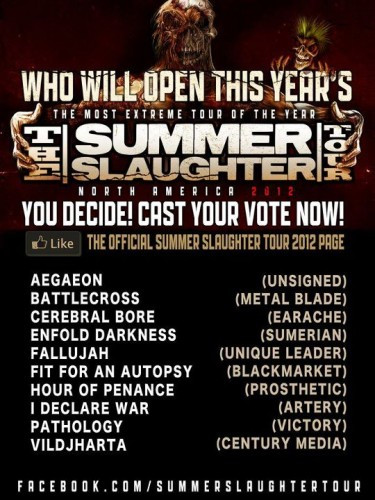 Uh, let’s see now, I posted an update about this tour yesterday and concluded with these words: “I may or may not write about this tour again before the final line-up becomes public. Probably will. Sticking to resolutions isn’t my strong suit.” Well, I may not know much, but I do seem to have a good understanding of myself.

As of yesterday, the SUMMER SLAUGHTER tour organizers had disclosed the names of three of the 10 bands who will be eligible for fan voting to select the opening act on the tour — though they also suggested they might let fans pick two opening acts. I wondered why they just didn’t go ahead and reveal all 10 names, but I wonder about a lot of things. Anyway, late last night they gave us the whole list, which you can see above.

To vote for who you think should be the opening band, go HERE. On that page, you’ll also see a link which says “Results”. Along with annoying pop-up ads, clicking on that link will give you the latest voting tally. As I’m writing this (at approximately 11 p.m. Pacific time on Monday night), less than 3,000 votes have been cast so far, and Fallujah is in the lead with 19% of the vote, followed by Vildhjarta with 16% and I Declare War with 15%. I’m sure by the time you read this, the vote totals will have changed.

Now, the marketing theory behind this voting thing is pretty transparent, and I have to say that at least in my case, it’s working. I’m actually curious about who will win because I happen to like every single band on the list! (As I wrote that, I could imagine KevinP beginning to type his comment — “What a shock. You like everything. All these bands blow.”) In fact, we have written about and praised every one of the bands at one time or another here at NCS.

If I didn’t give a fuck about any of the bands, I wouldn’t care about the vote outcome. But now I’m curious.

I haven’t voted yet . . . and I’m not sure I will, because I would have some trouble making up my mind, especially since I’ve only seen two of these bands perform before (Fallujah and Seattle’s I Declare War). I could narrow it down, I think, but not by a lot, and then I’d have to think hard (at least if I were going to take it seriously), and thinking hard  is against my religion, so I’m probably just going to fuck off instead.

Anyway, I just want to say that even though this is not a list of the 10 bands I would have picked for fan voting if I were in charge of this tour, it is an interesting list and I would be happy to watch any one of them start the show and I hope the promoters will package up the losers for another SLAUGHTER SURVIVORS tour like they did last summer.

I’ll go out on a limb and make a prediction, without saying whether I think this is what should happen, because that would require thinking hard. Despite the fact that I don’t exactly have my finger on the pulse of what’s most popular in metal among fans who are decades younger than moi, I’m seeing this as a throwdown between the -core scene and the djent scene — which means the bands closer to straight-up death metal will have a tough time of it — and my guess is that Vildhjarta will come out on top, especially because the djent vote (unlike the -core vote) isn’t going to be split between them and anyone else.

Also, I took into account that Vildhjarta have more Facebook likes than any other band on the list except I Declare War — though IDW has a lot more than Vildhjarta. But Vildhjarta is from Europe and hasn’t toured the U.S. before, and IDW tour like maniacs, so I think that also gives Vildhjarta an edge (whether it should or not).